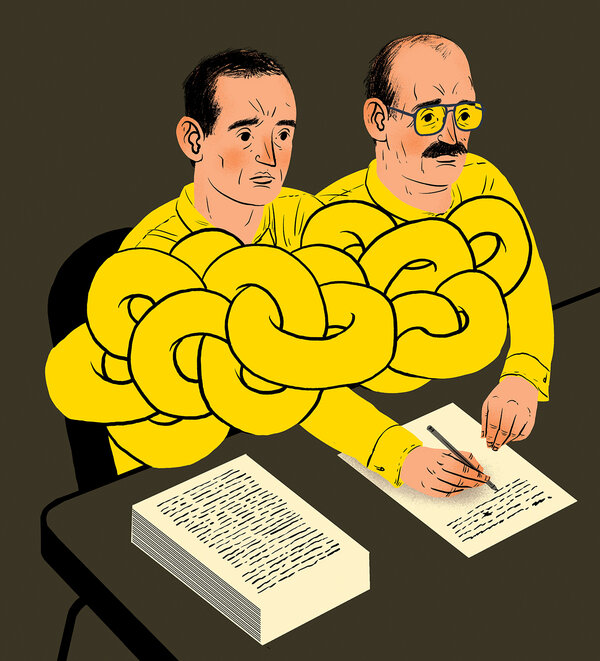 A CALLING FOR CHARLIE BARNES
By Joshua Ferris

Joshua Ferris’s literary career commenced in a way many writers might envy. His first novel, “Then We Came to the End,” an assured satire of office life written in a cleverly deployed first-person plural voice, won numerous awards and was named alongside novels by Denis Johnson and Roberto Bolaño as one of this publication’s 10 Best Books of 2007. What most impressed, perhaps, was Ferris’s keen eye for the many textures of modern American absurdity and his gift for propulsive, entertaining prose. Here was the latest entrant in the (by now quaint) serio-comic postmodern-novelist sweepstakes, a kid brother of Wallace, a son of DeLillo. Even his book title was derived from the first sentence of DeLillo’s first novel.

Then we came to a surprising turn. Rather than stick to a tone, if not a mode, that had worked, Ferris began to experiment. His next novel, “The Unnamed,” concerned a successful trial attorney with a mysterious ailment that forces him to go on walkabouts for months at a time. His involuntary wandering destroys him professionally and devastates his family. There is a kind of lush stringency to the prose of this novel, and an unflinching vision reminiscent of Beckett (with another title that nods to its debt). It’s a novel about, among other things, losing yourself — literally, as frostbite and amputations ensue — and the horrible possibility that love, however deep and real, might not be enough to bring you back. It was maybe not the follow-up you expected from the guy who wrote that fun cubicle satire perfect for Secret Santa season.

Another departure followed “The Unnamed.” “To Rise Again at a Decent Hour” moves out of DeLillo’s shadow to that of another member of the Axis of 20th-Century American White Male Novelists, namely Philip Roth, but with a fascinating twist. Its gentile protagonist, Paul O’Rourke, a sex- and baseball-obsessed Fifth Avenue dentist, hankers for belonging, to the point of insinuating himself into the families of his girlfriends. He whiffs twice, first with a Catholic clan when he’s young, and later with his partner’s Jewish family, despite, or really because of, his overreaching philosemitism. (As many Jews know, the moment people start prattling on about how much they love Jews, it’s time to skedaddle.) But just as he’s deserted, O’Rourke is courted by descendants of a lost biblical people, and somebody starts tweeting ominous passages from long-suppressed scriptures in his name. The novel launches into a provocative and very prescient meditation on tribalism, identity and technology. If “The Unnamed” was about the price of unmooring oneself from the world, “To Rise Again at a Decent Hour” explored the cost of being a joiner.

A dentist named Paul O’Rourke is mentioned in Ferris’s latest novel, “A Calling for Charlie Barnes,” though it’s a sign of the intriguing trickiness and scope of this book that it’s possibly not the same drill man. (A father or uncle, perhaps?) Ferris does seem to delight in intertextual world building, in fashioning a kind of mini Yoknapatawpha County. The Santacroces, the pined-for Catholic family in “To Rise Again,” also make an appearance here, as does another version of DeLillo’s inaugural sentence. Ferris has new fuel for the anxiety-of-influence fire as well. His narrator’s name is Jake Barnes — the same as Hemingway’s protagonist. Jake’s father is the Charlie of the title, and while the novel is ostensibly his story, it’s also about Jake’s attempt to narrate them both toward some approximation of redemption. (Hint: It’s a pretty big lift.)

The book begins with 68-year-old Charlie, nicknamed Steady Boy (ironically, it turns out), with his back to the wall, or at least stuck miserably to the chair in his basement office outside of Chicago. He has watched his existence as a barely successful but at least ethically upright financial planner crumble, along with his hopes for being upright at all. In the first instance, it’s 2008 and the banks are collapsing. In the second, he’s waiting for a call from his doctor confirming a grim diagnosis.

He begins to panic and take stock at once, pre-emptively calling his children with bad news. “Can you tell Marcy that her father has pancreatic cancer?” he tells his daughter’s co-worker. “People with pancreatic cancer go to their graves as if shot out of a cannon, OK?” When they do get the message, some of his progeny seem less than despondent. There have been false alarms before, and Steady Boy has not been the most consistent of parents.

Indeed, some of Charlie’s four children are very much ready to let nature take its course, but not Jake, who has been a lavishly observant witness to much of his father’s fruitless grasps at worldly success, from a failed comic strip to a doomed clown franchise to the disastrous marketing of a hirsute Frisbee. Through the construction of this very narrative, Jake means to honor all aspects of his father’s cracked but somehow still stirring pursuit of that eternal delusion, the American dream, and to maybe even imagine a life of generous and loving ease for a man who was born into hardship and often couldn’t help making it hard on himself and others. “One thing you have to keep in mind about Steady Boy,” he says. “If my father was something of a joke, he was also a … colossus.”

The language of this novel is by turns conversational, comically essayistic and lyrical. The first half of the book, in which Jake constructs a vivid, detailed portrait of Charlie’s life of short-circuited careers and failed marriages, achieves a rollicking momentum. The latter half creates more exquisite pressure with sly subversions and reversals that reveal, in the end, an object our metafictionally erstwhile narrator must teach himself to recognize: an abandoned kid’s broken heart.

Ferris points us toward a more collective heartbreak when he tracks a possible path for Charlie in the aftermath of financial meltdown and surgery. The novel is cagey at times about how much of the narrative is Jake’s wishful thinking, but the parallel between Charlie’s subsequent life and the coinciding Obama era is stated forthrightly enough: “He had had eight years of hope and change. … You believe in change, don’t you? That a man need not be mired hopelessly in himself, confined to his appetites and checked by his limits, bound for the grave much as he came into the world, making promises he would never keep and fooling himself every step of the way?” Ferris does and doesn’t believe. For all of our hope, the novel asks, how much can we actually alter about ourselves, not to mention the world we’ve been hurled into?

What we can do, and what some version of Charlie Barnes attempts — unlike previous Ferris protagonists, who either flee into solitude or seek a group’s approbation in the face of uncertainty and dread — is give up our customized hero’s journeys, forsake our Horatio Alger arcs (it’s all rigged anyway, as Bernie might put it) and sacrifice our time and energy to help others fulfill their potential, especially if they can be made forces for collective good. Indeed, do the right thing and you might very well achieve wealth and comfort after all, though chances are you’ll have left reality behind and reside inside a politician’s campaign promise, or a desperate novelist’s fantasia.

But what a fantasia it is, down to its last, bitter undoing. To list everything in play in this novel, including societal drift, ideological cleavage, the nature of truth and fiction, the alienation of families, the ravages of capitalism visited even on those who feel they have some agency in the system, might make “A Calling for Charlie Barnes” sound cluttered. It’s not. Ferris is in shrewd command of his thematic and syntactic trajectories. This novel is a passionate, well-constructed, often hilarious and, at times, profound plunge into grief, both civic and intimate, as well as a culmination (so far) of the literary explorations Ferris has been undertaking since he arrived.