Some years ago I was on a book tour in Dublin. Granted an unexpected night off, I asked the publisher’s representative, who was guiding me around, if he could recommend a good restaurant. He suggested an Italian trattoria not far from Trinity College. And then, lowering his voice confidentially, he said: “John Banville eats there.”

Such is Banville’s renown. Ireland’s greatest living novelist occupies a unique place in the contemporary pantheon. Not only is Banville a prizewinning, much-translated literary novelist, he is also a feisty, formidable critic, former literary editor of The Irish Times, playwright, memoirist, screenwriter and developer of long-form TV series. In other words, a literary polymath — somewhat in the line of Graham Greene.

Like Greene, Banville has a distinguished oeuvre of literary novels — 17, at the current count — and what we might term Greene-style “entertainments.” A series of detective novels written under the nom de plume Benjamin Black, featuring the Dublin pathologist Garret Quirke, has been extremely successful and adapted for television. The John Banville/Benjamin Black co-identity is a fascinating one. Why adopt the disguise of a pseudonym when everyone knows, and always knew, the man behind it? Greene, after all, was happy to sign his name to his own entertainments.

Now we have “Snow,” just to add to the mystery. The novel has Banville’s name on it, but it is also a classic policier in the Benjamin Black mode. It features a young Irish detective — earnest, a bit troubled — called St. John (pronounced “Sinjun”) Strafford. Strafford has appeared before, as a detective in a Benjamin Black novel, “The Secret Guests,” set in 1940. In “Snow,” Strafford is 35 (the book is set in December 1957), which would have made him 18 in the earlier novel. Unless there were teenage detectives nosing around midcentury Ireland, perhaps a bit of retrospective chronological adjustment is required.

“Snow” is advertised on the cover as “An Inspector St. John Strafford Novel,” implying that a new series is underway. Is this a third layer to the Banville corpus? John Banville at the top, Benjamin Black a level below and the “John Banville” of “Snow” and its future siblings somewhere in the middle? (The writer himself recently said he had killed off that “rascal” Black.)

The story begins almost like a game of Clue. Just before Christmas, in a ramshackle country house in County Wexford, south of Dublin, a Roman Catholic priest is found murdered in, yes, the library. Detective Strafford is sent to investigate. As in Clue, the various suspects — mostly members of the Osborne family and their staff — were all in the house the night of the murder. So far, so familiar — except for one detail: The priest has also been expertly castrated. 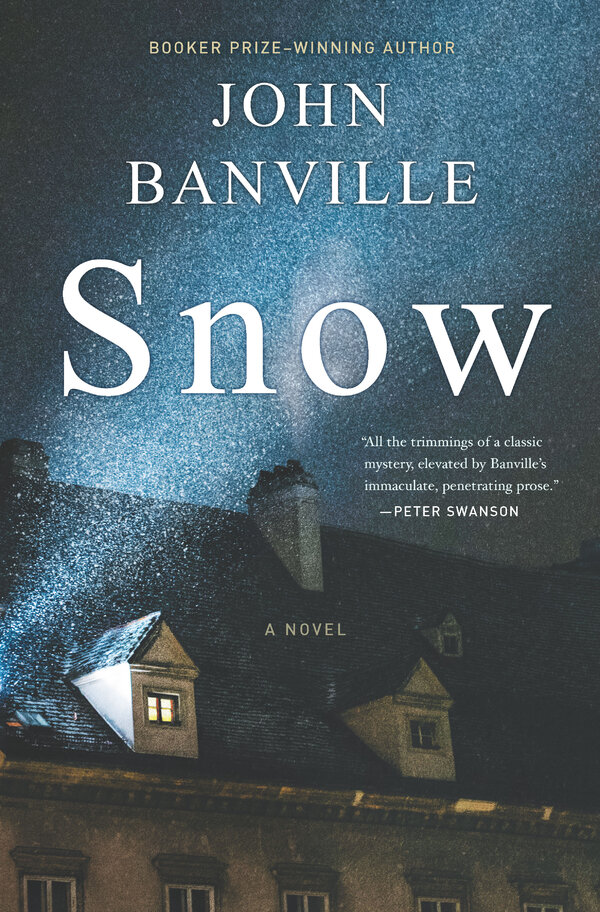 Over the next few days, Strafford endeavors to find the culprit and in the process unearths a snake pit of secrets about the Osbornes and the dark undercurrents in Ireland and its society in the 1950s. Time and again, Banville sets up and then deftly demolishes the Agatha Christie format he seems to be aping. Everything that seems creakingly familiar about the country-house murder turns out to be darker and darker still.

What makes “Snow” even more interesting is its social context. The Osborne family is Anglo-Irish, a colonial class of Protestant landowners who can trace their arrival in Ireland back to the time of Oliver Cromwell and have survived into the 1950s. English in their attitudes and class confidence, they are a stark reminder to the Catholic Irish that for the 5 percent of the population who are Protestant in this Roman Catholic country, nothing much has changed since the 17th century. The Anglo-Irish — the Horse Protestants, or swaddlers, as they are derogatively known — live in their crumbling stately homes, ride to hounds, go to balls and race meetings, speak with a different accent and still own much of the land, managed in a form of benign paternalistic feudalism. This is the society depicted in the novels of Elizabeth Bowen, Molly Keane and J. G. Farrell. Eccentric, privileged, slowly dying out.

What distinguishes Strafford from almost all of his colleagues in the Garda, the Irish police force, is that he is from the same class as the Osbornes, the family he is investigating, and a Protestant. Banville makes excellent play with this pairing. Strafford confuses the Osbornes; he’s one of them, yet he’s also potentially their enemy. The family is bizarre and riven with mutual antagonisms. Colonel Osborne is a bluff military man, a widower. His second wife is skittish and mentally ill, possibly addicted to morphine. His daughter and son dislike their stepmother intensely. Various retainers help maintain their status.

Strafford enters their world and has to determine which one of them could have committed such a wanton murder. The colonel thinks someone broke into the house. Slowly but surely the family hostilities and fraught back stories point Strafford in a particular direction.

I won’t reveal how the plot thickens. Banville’s depiction of the young republic that Ireland then was (real independence came only in 1937) is fascinating. More telling for Strafford’s investigation is the way the Roman Catholic Church held enormous sway — politically and emotionally — over the country and its people, a sway that has only recently diminished. James Joyce described the Irish at the beginning of the 20th century as “an unfortunate priest-ridden race,” and Banville’s County Wexford assumes this still held true in the 1950s.

There are two strange diversions in the novel where the point of view — Strafford’s — is dramatically broken. One reveals a bizarre and disturbing sexual encounter; the other is a first-person confession that, in effect, gives most of the game away. The alert reader, picking up the clues that Banville drops, would have been very close to divining what the motivation for the murder was without this confession. These swerves in the narrative remind us that we’re reading a novel by John Banville, not an Ed McBain procedural or a Dorothy L. Sayers whodunit. In “Snow,” Banville’s engagement with the genre of crime or detective novels is partial. His ambitions for his novel are more complex.

Banville himself was born in County Wexford in 1945. As an adolescent in the 1950s, he would have known the world of the Osbornes and the local Irish communities in the countryside and how they interacted — or didn’t. The book sings with authenticity and Banvillian tropes. It is full of very precise description of clothes and appearance; the writer concentrates on people’s eyes in particular. Smells preoccupy him. He indulges in anthropomorphism: Bookcases “stare,” books display an attitude of “mute resentment,” trees “press forward with desperate eagerness.” Banville is one of the great stylists of fiction in English and “Snow” allows the limpid cadences of his prose free rein:

“It was as if he had fallen briefly asleep and dropped at once into the midst of a powerful and deeply revelatory dream, all the details of which turned transparent the instant he woke up, though the sense, the afterglow, of their significance remained.”

An entertainment, perhaps, but a superbly rich and sophisticated one.