In the Pandemic Present, a Literary Tour of Greenwich Village’s Past

When my boyfriend and I moved from our pocket-size Greenwich Village apartment last October, our cat, Evita Carol, made a sound I’ll never forget. After all of the furniture and four years of ephemera had been slammed into a truck parked illegally on the corner of Bleecker and Thompson, I let her out — and she howled. It was a guttural cry, a mew-tinged eulogy for a place she once recognized and which now lay empty before her, gutted.

It didn’t take long for Evita Carol to settle into our new place, not far away, overlooking Broadway. But I couldn’t get past that howl. As the cold crept in and New York City braced for a bitter holiday season devoid of its traditions, tourists and daily rhythms, I stood looking out the window at an unfamiliar sidewalk in a city battered by a brutal global pandemic. Our cat’s cry was the sound I would have made if I could — and I was well aware that I was one of the very lucky ones.

So I did what I had done when Covid-19 first began to ravage the city a year ago: I read. If the present was unprecedented, I wanted to steep myself in the past — specifically in the history of my beloved neighborhood, where our former turn-of-the-century tenement building and the largely intact blocks surrounding it had already withstood moments uncannily similar to, and some far worse than, this one. Why not get to know these eyewitnesses? 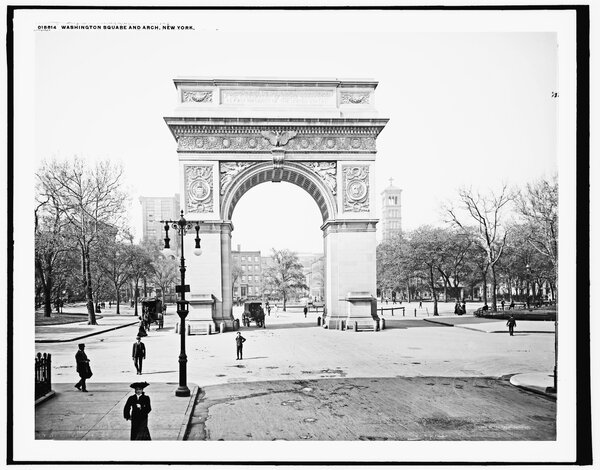 John Strausbaugh’s “THE VILLAGE: 400 Years of Beats and Bohemians, Radicals and Rogues, a History of Greenwich Village” (624 pp., Ecco, $29.99) was the first thing I’d ever binged not on a streaming service. Last March, as the clock skidded to a halt with stay-at-home orders, I turned to Strausbaugh’s encyclopedic 2013 recounting of the people and places that transformed what was a patrician country escape in the 17th century into an urban neighborhood whose name became shorthand for a certain kind of artistic, political and sexual energy by the 20th. Strausbaugh delights in the details of how and why this tangle of uneven, sometimes diagonal streets defied not only the city grid established by the Commissioners’ Plan of 1811, but also social mores, for centuries after.

It’s easy to get lost in the Village, but with Strausbaugh’s context I found myself subconsciously tracing the same twisted paths he had, all informed by tantalizing images of a neighborhood that looked in past centuries, as it still does now, a little bit off. Here, in an undated image, is the Washington Arch, devoid of its famous twin statues of George Washington, but with horse-drawn wagons passing beneath (it’s now thankfully closed to traffic). And there, in an early 20th-century photograph, is the poet Edna St. Vincent Millay standing in front of funny little 75½ Bedford Street, which has been cited as the “narrowest house in New York” and certainly looked the part as I stared at it while picking up a post-jog croissant across the street.

But there were other houses that made me stop in my tracks, too: rows of them, lining the leafy streets west of Sixth Avenue. Sure, their exclusivity was always alluring, but their shifting architectural styles were now something of an obsession, as my other, pre-pandemic pastimes became verboten. BRICKS & BROWNSTONE: The New York Row House (352 pp., Rizzoli, $85), a 2019 reissue of the 1972 original text by Charles Lockwood and Patrick W. Ciccone with Jonathan D. Taylor, offered the vocabulary I craved. Dylan Chandler’s photographs take readers on a visual tour from the earliest Federal-style homes of Revolutionary-era New York, through the Greek Revival period of the mid-19th century (exemplified by the stunning row of homes on the north side of Washington Square Park), to the brownstone craze that coincided with the Italianate style (typified in brick-front form at 290 West 4th Street, another favorite on my daily route) and beyond. There are interiors, too — the kind of elegant, light-filled fantasies such as 37 West 11th Street that I could only catch guilty glimpses of if I stood on my toes.

Closer to home in every sense was George Chauncey’s “GAY NEW YORK: Gender, Urban Culture, and the Making of the Gay Male World, 1890-1940,” (Illustrated. 512 pp., Basic Books, paper, $22.99), first published in 1994 and updated in 2019 to commemorate the 50th anniversary of the Stonewall rebellion. Chauncey’s book is a monumental examination of how New York City’s nascent queer communities were forged from the late 1800s until World War II. But admittedly, I was more interested in a bit of scandal around the literal corner from our old apartment, at 157 Bleecker Street. Currently home to a gastropub popular with the outdoor dining set, the building once housed a salacious bar called The Slide, which, as Chauncey recounts, catered to a clientele popularly, and often derogatorily, known in the 1890s as “fairies.” It’s the closest I’ll get to stepping foot inside a crowded queer bar until further notice.

And then we moved. I’d grown so used to the almost eerie quiet and obstructed view of the dingy inner courtyard we faced on Thompson Street that the soaring high-rises and thrum of now-empty crosstown buses on Broadway was disorienting. I missed the scale of the city below Washington Square and resented the buildings that blocked the already limited afternoon light. And so I decided to learn about them — if only to be able to judge them more smugly.

The author William Hennessey’s WALKING BROADWAY: Thirteen Miles of Architecture and History (Illustrated, 224 pp., The Monacelli Press, paper, $25), a 2020 release, couldn’t have been better timed: After all, walking the city’s longest street is as good an antidote to Covid-era cabin fever as any. But it was too cold to venture outdoors unnecessarily, and besides, the hulking, full-block terra-cotta building visible from my couch was my primary concern. It turns out that this is the Wanamaker’s Department Store Annex, a 1903 Renaissance-style marvel originally connected via skybridge to an even more marvelous cast-iron department store across the street called the Iron Palace. The back story encouraged me to actually look up and take stock of the graceful arched windows and ridiculously detailed cornices stretching as far as I could see down lower Broadway. I had never noticed them before — only the increasingly closed storefronts on the ground floor — and Hennessey’s guide forever changed that.

Lately, I’ve turned to the characteristic wit of the podcast duo Greg Young and Tom Meyers to color in the rest of the neighborhood for me, as well as all of Manhattan, for that matter. In their 2016 book, THE BOWERY BOYS: Adventures in Old New York (Illustrated, 528 pp., Ulysses Press, paper, $17.95), the authors’ penchant for the mysterious and the macabre finds form in an anecdote about Astor Place, a cobblestone’s throw from Wanamaker’s. On May 10, 1849, the plaza surrounding the former Astor Place Opera House — a grand, colonnaded building — erupted in deadly violence as a crowd charged in protest against the final performance, in “Macbeth,” of the British actor William Charles Macready, who for American audiences embodied the hauteur of the upper classes. The Opera House was demolished in 1890, and the incident faded from memory. But the tranquil streets today serve as a reminder that this, too, shall pass.