The voter-profiling firm Cambridge Analytica, which filed for insolvency last year, looked like the stuff of liberal nightmares. Enumerating its salient features was like playing a game of cartoon-villain bingo. There was the pretentious and slightly ridiculous name, redolent of a Bond-movie syndicate; there was mysterious funding from the right-wing billionaire Robert Mercer and his family, along with deep ties to Stephen K. Bannon, President Trump’s former chief strategist; and there was a chief executive, Alexander Nix, who was caught on hidden camera bragging about the unsavory lengths the company would be willing to go to sway an election — a political gun for hire in a Savile Row suit.

Two new memoirs by former Cambridge Analytica employees offer to illuminate the company’s shadiest dealings, though they differ wildly in both content and tone.

Christopher Wylie is the whistle-blower who first revealed how the company harvested data from millions of Facebook users without their permission; his book, “Mind____” (the second part of the compound word is a vulgarity), is freewheeling and profane. Brittany Kaiser came out as a whistle-blower, too, a week after Wylie did; her book, “Targeted,” is aggrieved and self-pitying. After reading Wylie’s memoir, you’ll have learned something; after reading Kaiser’s, you’ll wonder whether she herself has learned much of anything at all.

Wylie’s book recounts “how a liberal, gay, 24-year-old Canadian found himself part of a British military contractor developing psychological warfare tools for the American alt-right.” That contractor was SCL Group, Cambridge Analytica’s parent company; Wylie started working for the London-based SCL in 2013, before Bannon (“Steve from America”) arrived with an injection of Mercer’s cash to create an American subsidiary for conservative causes.

Wylie, a former tech consultant for the Liberal Party in Canada who was pursuing a Ph.D. in fashion-trend forecasting, initially believed his role at SCL would align with his values. He explains how his interests in culture were a good fit for researching methods to de-radicalize insurgents in developing countries. There’s an aesthetic to jihadist propaganda videos that makes them seductive, he says; cultural signifiers can be deployed as a devastatingly effective recruitment tool.

Of course, if you learn how to make a population more resistant to extremism, you could use that same knowledge to do the reverse. Some of Wylie’s pronouncements sound schematic and jarring, especially when he talks about “the rise of jihadism and the popularity of Crocs” as analogous “products of information flows,” but there’s often insight in the unexpected connections he draws, and it’s not hard to see why he and Bannon initially bonded over their shared obsession with culture. (“It felt as if we were flirting — but not, because that would be gross.”) Wylie’s appreciation for “the aesthetics of revolt” meant he was fascinated by the kind of anti-establishment voters Bannon wanted him to interview for research, including an incense-burning, kombucha-drinking suburban woman who insisted gay people “were going straight to hell.”

This woman was found by cross-referencing data from government sources and private brokers. Cambridge Analytica would go on, notoriously, to get reams of Facebook data for its microtargeting efforts, using an app devised by a researcher at Cambridge University. The app looked like a personality test but ultimately functioned as a way to harvest all the Facebook data from the user who downloaded it — as well as all the data from the user’s Facebook friends.

Wylie covers plenty of ground, explaining in illuminating and often scary detail how Cambridge Analytica exploited the data to create Facebook pages that would needle “neurotic, conspiratorial citizens,” propagating an outraged solidarity. (The efficacy of these techniques is still a matter of debate.) He describes another project that the company called “voter disengagement” — that is, suppression of African-American voters. Republican clients, worried that demographic changes were spelling electoral trouble for them, asked Cambridge Analytica to find “ways to confuse, demotivate and disempower people of color.”

It’s the kind of meddling that Cambridge Analytica’s parent company had been doing for years in the developing world, a form of colonialism that rich countries are more accustomed to perpetrating than experiencing themselves. Cambridge Analytica’s clients “were simply treating the American population in the exact same way they would treat the Pakistani or Yemeni populations on projects for American or British clients,” Wylie writes.

He left the company in late 2014, as the nefarious projects mounted and the toxicity, he says, became too much to bear. “Nix was a monster,” Wylie writes. “Bannon was also a monster. And soon enough, were I to stay, I worried that I would become a monster, too.”

A month later, Nix hired Brittany Kaiser to work in “business development.” Like Wylie, Kaiser says she was a liberal — though unlike Wylie, she so strenuously insists how fundamentally decent she is that her awkward remonstrations have a perverse effect on her credibility. She is frequently “humbled.” She is forever a “human rights activist.” She is worldly and smart and spectacularly connected while nevertheless “vulnerable” and helplessly “naïve.” All of this makes for a bizarre book: “Targeted” has the slightly sweaty smell of someone trying to launder her reputation.

Kaiser knows she has a lot of explaining to do. She stayed with the company for more than three years, coming out as a whistle-blower only after a tough exposé by Carole Cadwalladr in the Guardian delineated Cambridge Analytica’s attempts to sway a Nigerian election and highlighted Kaiser’s role in the plan. (Kaiser takes frequent swipes at Cadwalladr in “Targeted,” asserting, without offering much by way of evidence, that the journalist was “dead set on defaming me.”) 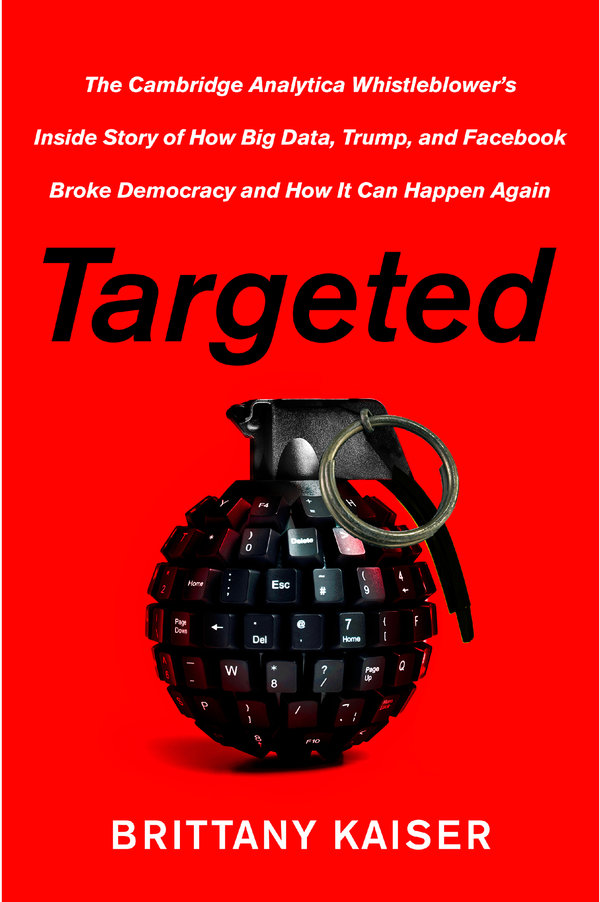 The recent documentary “The Great Hack” includes footage of Kaiser speaking on a pro-Brexit group’s panel at a public event; another scene has her worrying about a visit she paid to Julian Assange a few months after the 2016 election. In “Targeted,” she acknowledges helping develop a relationship with the oil company Lukoil, which is famously linked to the Kremlin, but says she had no idea it was a Russian company.

When it comes to personal revelations, the book is opaque and exceedingly repetitive, as if the prose had been pushed through the messaging mill of a P.R. firm. Kaiser concedes she did everything for the money — but even as she admits her actions might look “selfish,” she maintains she was ultimately selfless: Her salary, she says, was used to help her parents, who had been wealthy enough to send Kaiser to Phillips Academy, in Andover, Mass., but had lost everything since and were living in dire financial straits.

In their respective memoirs, Wylie and Kaiser cast aspersions on each other, which seems especially curious for two people who apparently have never met in person. Wylie even challenges the notion that Kaiser is a whistle-blower, depicting it as a conveniently timed rebranding; Kaiser calls Wylie a “disgruntled employee,” and seems incredulous that this “pink-haired high school dropout” was getting so much positive media attention. (That she calls herself “the Cambridge Analytica whistle-blower” in her subtitle is extremely telling, though not in the way she intends.)

Still, the documents Kaiser provided to authorities corroborated Wylie’s revelations, and regardless of her reasons for coming clean after breaking bad, she eventually talked to journalists on the record, when most other employees kept quiet. Whistle-blowers are often complicated people with a tangle of motives, and dueling memoirs aren’t necessarily the ideal place to tease out the definitive truth. As Kaiser put it to herself after she realized that refusing to ask meant she couldn’t tell: “It’s above my pay grade.”