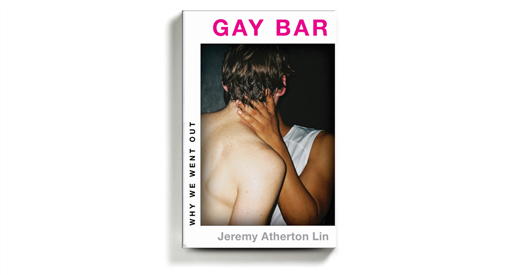 Our favorite adjectives are revealing. The reason we love people, the writer and interviewer Paul Holdengräber has said, is that we find that we have these favorites in common.

I wonder if shared aversions aren’t an even stronger bond. What if I were to describe a book as plain-spoken or lucid? If you felt a twinge of boredom (bonus if you thrill to disheveled, elusive, gamy), then I have a book for you.

Jeremy Atherton Lin’s “Gay Bar” is a restless and intelligent cultural history of queer nightlife. Atherton Lin began writing it in 2017; more than half of London’s gay bars had shuttered in the previous 10 years. “This was blamed on property developers, apps, assimilation,” he writes. “In Britain, the steep decline came not long after civil partnerships were introduced in 2005.” There was an “upsurge in stay-at-home gays” and roving parties.

What is being lost? If you’re expecting an elegy, think again; “Gay Bar” has something knottier, more troubled, to offer. “I responded to the closures with an automatic, nearly filial sense of loss, followed by profound ambivalence,” Atherton Lin writes. “The gay bars of my life have consistently disappointed.”

Disappointed — as well as welcomed, astonished, exasperated, intimidated. The bars both affirmed and challenged his sense of identity. In the opening scene, Atherton Lin and his partner (rather regrettably referred to as the Famous Blue Raincoat, after the Leonard Cohen song) go out to a London gay bar, looking for a little adventure, and enter a crowd: “With a kind of brutal elegance, the group spread apart like the blades of a pocketknife.”

He describes the bars not as sanctuary but as refuge, a more complicated concept. “The Latin root refugium positions a refuge as a place to which one flees back — indicating regression, withdrawal and retreat,” he notes. “The question arises as to what distinguishes an enclave from a quarantine, and whether either is any longer necessary.”

The book is broken into sections, each devoted to a particular bar and city. Atherton Lin is a skilled reader of the signifiers of clothes and architecture, the fetishization of working-class fashion, for example, and how the rise of AIDS influenced design decisions: “A new type of gay bar began to appear in London’s Soho in the ’90s — airy, glossy, continental. The design sent a clear message: In here you won’t catch a disease.”

But Atherton Lin is even more talented at seeing what no longer remains, of deciphering places as palimpsests of a kind, with their traces of fragile, fugitive queer history. Sometimes that history is his own.

“Gay Bar” offers a twist on the conventional memoir; it’s a life seen in snapshots, the bars as the backdrop. The book opens in 1992. Amaretto sours in West Hollywood, Atherton Lin in college, still strenuously dating women and meeting his first groups of gay men. “They assessed instead of greeted,” he recalls. “They were swishy — not mincing, but like a sword slicing air.” He’s awkward at the bars, before gratefully discovering that his uncertainty embodies “a desirable archetype of its own: the sheepish boy next door.”

Jump cut: He’s wearing stacked Adidas and dancing on the platforms of the club now. But his curiosity about West Hollywood is curdling into disappointment. “Everything about being gay was so crowded: the ads for bars and escorts and waxing services rammed together, shallow and histrionic and imperious,” he writes. “I faced the possibility I was a degraded cliché.” We’re deeper into the ’90s now; you can hear those sweet strains of Gen X disaffection. He travels across Europe after graduation, desperate to get to a London party that attracts the kinds of boys he likes — “pale and interesting.” He picks up the Famous Blue Raincoat.

Fade to San Francisco: a declaration of love on a park bench (and magic mushrooms). Neighbors hollering out of windows “down to scruffy friends, like a Muppets production of Tennessee Williams.” At the bars, there’s Wolfgang Tillmans taking a photograph of a crumpled napkin; there’s someone Atherton Lin recognizes from Flickr.

It’s 2007. Scruffy beards and hoop earrings. The smoking ban has been enforced in Britain. The black jeans are tight as leggings.

It’s the present day. London, cozy domesticity. Cooking vegetables from the farmer’s market. “Our randiest neighbors are foxes,” he writes. “I am intimately aware of the goings-on in a magpie nest I can watch from our bed.”

“Gay Bar” has its share of first-book blues. The prose occasionally stumbles. There are unfortunate attempts at aphorism (“We earned our rainbow stripes by putting up with hard rain”) and a taste for overwriting that betrays some insecurity — Atherton Lin will never use “red” if “sinople” is at hand. (That’s not the worst of it. A request from this Punjabi: Let it never again be said that a Sikh man is “rocking” his patka.) Most jarring, perhaps, are Atherton Lin’s efforts at mimicking the theorists he clearly admires, those sections that come across as parodies of academic writing: “If the word community is indeed a failure of vocabulary — too broad, too utopian — perhaps the metaphor to best replace it is metaphor itself”; “gay bars are about potentiality, not resolution. Gay bars are not about arriving. The best ones were always a departure.”

But the treatment of time in the book — the way the present is peeled back to reveal the past — is beautiful, and original. Throughout there is a feeling of simultaneity, of queer lives and histories moving in parallel, of nightlife as a site of pleasure, play and resistance (“resistance” — that etiolated word made freshly vivid in the retellings of uprisings). We float through the years, each era announced with its odors and perfume, the soundtrack of the clubs. Interestingly, the present day doesn’t announce itself the same way, with scent or sound, but with language, with a new vocabulary.

“The kids today, it turns out, want rules. They need a provisional constitution for what their new spaces will be,” he writes. “We did not go out to be safe. I didn’t, anyway.”

It’s the sort of observation commonly accompanied by censure, by scolding the cosseted youth. Atherton Lin notes the change only with surprise. He is not threatened by differences in desire or vulnerability.

Atherton Lin must be moored at home now, like the rest of us. He’s already told us what he most misses about gay bars; how movingly he replicates it here, with his wide, strobing intellect, enlivening skepticism, rascally allure: “Perhaps you could call a gay bar a galaxy: We are held together but kept from colliding by a fine balance of momentum and gravity. I miss, more than any notion of community, the orbiting.”