In ‘A Promised Land,’ Barack Obama Thinks — and Thinks Some More — Over His First Term

The most audacious thing about Barack Obama’s new memoir, “A Promised Land,” is the beaming portrait on its cover: There he is, the 44th president, looking so serenely confident that it’s as if the book weren’t arriving on the heels of a bitter election, amid a cratering economy and a raging pandemic.

The ebullient image also stands at odds with the narrative inside — 700 pages that are as deliberative, measured and methodical as the author himself. Obama says that he initially planned to write a 500-page memoir and be done in a year; what he ended up with instead is a hefty volume (now the first of an anticipated two) that stops in May 2011, shortly after his roasting of Donald Trump at the White House Correspondents’ Dinner on April 30 and the killing of Osama bin Laden the day after.

Obama’s extraordinary first book, “Dreams From My Father,” was published in 1995, a year before he was elected to the Illinois senate, and traced his family history alongside his own coming-of-age. “A Promised Land” is necessarily less intimate and more political, offering close-up views of the major issues that Obama faced during his first term, including the economic stimulus, health care, immigration, the environment and the forever war in Afghanistan.

Presumably left for the future volume are, among other fraught subjects: the 2016 election, his abdication of his own “red line” in Syria, the entrenchment of the surveillance state and a discussion of drone strikes. This isn’t to say that “A Promised Land” reads like a dodge; if anything, its length testifies to what seems to be a consistently held faith on the part of the former president — that if he just describes his thinking in sufficient detail, and clearly lays out the constellation of obstacles and constraints he faced, any reasonable American would have to understand why he governed as he did.

Nearly every president since Theodore Roosevelt has written a memoir that covers his years in office; this one contains some inevitable moments of reputation-burnishing and legacy-shaping, though the narrative hews so closely to Obama’s own discursive habits of thought that any victories he depicts feel both hard-won and tenuous. An adverb he likes to use is “still” — placed at the beginning of a sentence, to qualify and counter whatever he said just before. Another favorite is “maybe,” as he reflects on alternatives to what happened, offering frank confessions of his own uncertainties and doubts. At a time of grandiose mythologizing, he marshals his considerable storytelling skills to demythologize himself. He addresses the book to the “next generation,” to young people who seek to “remake the world,” but the story he tells is less about unbridled possibility and more about the forces that inhibit it. 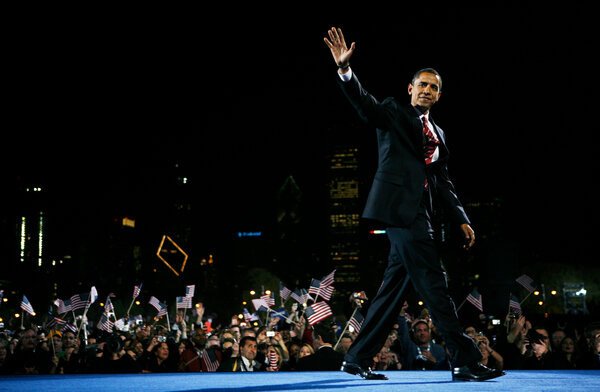 He periodically reminds us how he inherited a state of emergency. As one of his friends said after Obama’s historic win in 2008, when the economy was getting devoured by the Great Recession: “Two hundred and thirty-two years and they wait until the country’s falling apart before they turn it over to the brother!”

Once in office, Obama sought the help of experienced insiders instead of “fresh talent,” deciding that the dire circumstances “demanded it.” Obama says he had ambitious ideas for structural change, but that his team insisted that any attempts to mete out some “Old Testament justice” to the banks whose avarice and recklessness had pushed the financial system to the brink would send skittish markets into a full-blown panic.

But quelling markets did little to quell anger and fear — something that conservatives, Obama noticed, were quick to seize on and use to their advantage, while the president deemed it perilous to tap into such incendiary emotions. (This seemed to be an ingrained sensibility: David Maraniss’s 2012 biography of Obama has one of his mentors recalling with a touch of exasperation how even when they were doing community organizing in Chicago, Obama was “reluctant to do confrontation, to push the other side because it might blow up.”) What could have been politically beneficial to him, Obama takes pains to spell out, would have risked degrading the institutions that needed to be repaired, not demolished.

There’s a dynamic that Obama describes again and again in “A Promised Land”: establishment Republicans shrewdly finding ways to appropriate and exploit the feelings of helplessness and resentment that their own deregulatory policies had helped to bring about in the first place. “If all this seems obvious to me now, it wasn’t at the time,” Obama writes. “My team and I were too busy.” He recalls a Republican senator telling him, “I hate to say it, but the worse people feel right now, the better it is for us.” (This senator may have hated to say it, but he loved to see it.) The result was a drubbing in the 2010 midterms, when Democrats lost an astounding 63 seats in the House.

About the substance of those first two years in office, Obama expresses few regrets. “We had saved the economy,” he writes. “We had stabilized the global financial system and yanked the U.S. auto industry from the brink of collapse.” The Affordable Care Act made health care available to another 20 million Americans. The midterms “didn’t prove that our agenda had been wrong. It just proved that — whether for lack of talent, cunning, charm or good fortune — I’d failed to rally the nation, as F.D.R. had once done, behind what I knew to be right.”

The tone that Obama strikes in lines like these is almost mournful. He shows how a certain kind of blunt candor seemed all but unavailable to him as the first Black president. After he offered the mildest rebuke of the police officer who arrested the scholar Henry Louis Gates Jr. on his own front porch, saying that the officer acted “stupidly,” his support among white voters plunged. In public, Obama was unfailingly conciliatory, telling reporters he “could have calibrated my original comments more carefully,” even as he began to realize that the issue of Black people and the police was a reminder “that the basis of our nation’s social order had never been simply about consent; that it was also about centuries of state-sponsored violence by whites against Black and brown people.”

As much as he knew this, he couldn’t say it. His almost zealous commitment to moderation rankled some progressives, who had assumed that his soaring campaign rhetoric meant he was a visionary bent on overturning the status quo. Whenever he felt stuck, he fell back on empathy and “process.” They sound like incommensurate traits — one is inventive and literary, the other is bland and technocratic. But for Obama — who in this book demonstrates an almost compulsive tendency to imagine himself into the lives of others (whether it’s Hillary Clinton, John McCain, or, in one passage, a Somali pirate) — a sound process “was born of necessity.” Decisions that were made after taking into account a variety of perspectives reassured him that he wasn’t blinkered by his own.

“A Promised Land” isn’t entirely about the presidency. The first 200 pages move (comparatively) briskly through Obama’s early years to his life in Chicago, when his burgeoning political career put a strain on his marriage to Michelle, who had curtailed some of her own ambitions so that one of them would be present for the couple’s daughters. Of course, becoming president didn’t yield anything that resembled a work-life balance, though it did mean that rather than commute between Chicago and Springfield, Ill., or between Chicago and Washington, he could usually be home for dinner by 6:30 before returning to the Oval Office. He would receive his President’s Daily Brief (or as Michelle called it, “The Death, Destruction and Horrible Things Book”) at the breakfast table.

He happened to be at home in April 2010 when he first got word that an explosion had torn through the Deepwater Horizon, a drilling rig off the Louisiana coast, belching fire and smoke and gushing oil — the worst oil spill in the country’s history. An underwater video feed showed “the oil pulsing in thick columns from the surrounding wreckage,” Obama writes, “like emanations from hell.”

The novelty and enormity of the disaster shook him. (The technology for ultradeep underwater drilling made the Exxon Valdez look like a Tinkertoy by comparison.) Until then, Obama had maintained a “fundamental confidence” that he “could always come up with a solution through sound process and smart choices.” But those “plumes of oil rushing out of a cracked earth and into the sea’s ghostly depths” seemed of another order, unassimilable to his generally imperturbable worldview. Even after the hole was plugged and the cleanup was proceeding apace, something awful had been unleashed, with the true extent of the poisoning not yet known.

A hundred pages later, Obama remembers how Republicans seemed to get increasingly petulant at the prospect of working with his administration. “It was as if my very presence in the White House had triggered a deep-seated panic,” he writes, “a sense that the natural order had been disrupted.” Trump had been peddling a birtherist conspiracy theory that some conservatives seemed eager to accept.

Obama doesn’t force the metaphor, but the events described in “A Promised Land” suggest that something very old and toxic in American politics had been unleashed too. It was as if the Republican Party, having sidled up to the jagged shores of white grievance, was starting to founder on them. As he writes of the Deepwater disaster: “Where the rest of the oil ended up, what gruesome toll it took on wildlife, how much oil would eventually settle back onto the ocean floor, and what long-term effect that might have on the entire Gulf ecosystem — it would be years before we’d have the full picture.”