On Sunday, Oct. 17, 1943, these pages contained a book review of “Mein Kampf.” As part of a special issue marking the anniversary of the end of World War II, with reviews of new books on the fallout from the atomic bomb, Poland’s role in the war and a new biography of Hitler, The Book Review has decided to revisit it.

We can only imagine the debates among editors then about how to handle this first “definitive” English translation of Hitler’s political manifesto. The full horror of what was then transpiring in Europe exists only between the lines of the review — in the knowledge that Hitler’s genocidal vision was being fully realized as this went to press.

Three days before the review ran, there was an uprising at the Sobibor extermination camp where at least 170,000 Jews had already been killed in gas chambers. A day after the review ran, a thousand Jews were rounded up in Rome and began their train journey to Auschwitz. The reviewer, William S. Schlamm, an Austrian-American journalist, could not know any of this. But he did know that the Book Review was taking on the Nazis with the only weapon we’ve ever had in our arsenal: the interrogation of language. 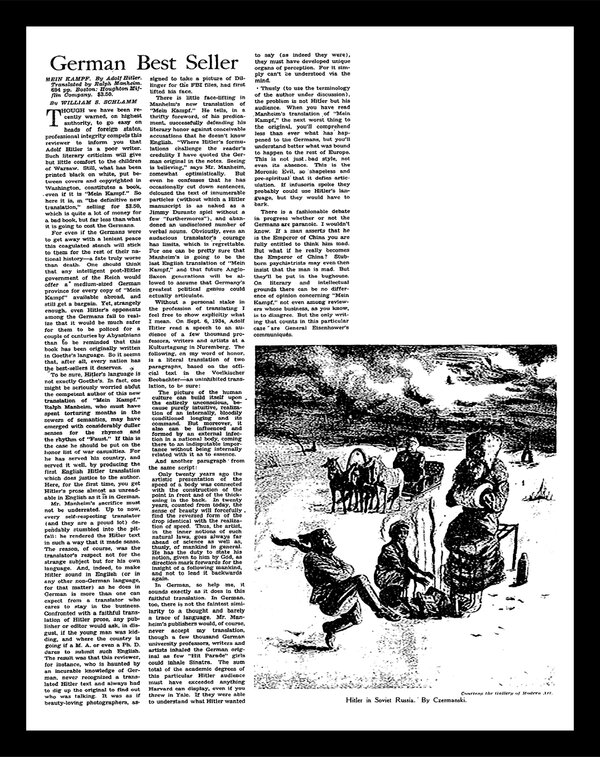 “Still, what has been printed black on white, put between covers and copyrighted in Washington, constitutes a book, even if it is ‘Mein Kampf.’ So here it is, in ‘the definitive new translation,’ selling for $3.50, which is quite a lot of money for a bad book, but far less than what it is going to cost the Germans.”

“Here, for the first time, you get Hitler’s prose almost as unreadable in English as it is in German.”

“When you have read Manheim’s translation of ‘Mein Kampf,’ the next worst thing to the original, you’ll comprehend less than ever what has happened to the Germans, but you’ll understand better what was bound to happen to the rest of Europe. This is not just bad style, not even its absence. This is the Moronic Evil, so shapeless and pre-spiritual that it defies articulation. If infusoria spoke they probably could use Hitler’s language, but they would have to bark.”

“On literary and intellectual ground there can be no difference of opinion concerning ‘Mein Kampf,’ not even among reviewers whose business, as you know, is to disagree. But the only writing that counts in this particular case are General Eisenhower’s communiqués.”