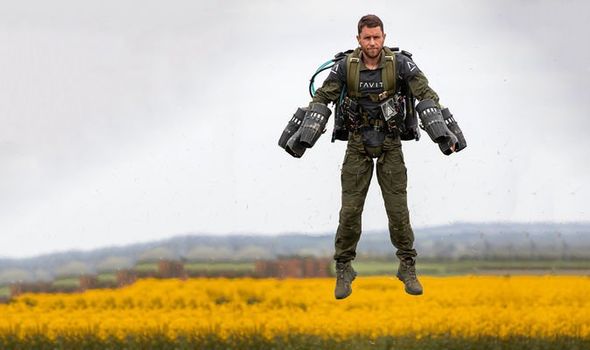 A mighty roar – like an F1 car leaving the pits – shatters the stillness of the First World War airfield near Stonehenge, and Richard’s smile is replaced by an expression of deep concentration. He carefully adjusts fingertip controls to gradually allow more fuel into the plastic tubes feeding the five engines. Almost immediately he rises slowly into the air, sending off waves of heat. I’m looking at a real-life Iron Man, hovering 10ft above my head, and suddenly he’s off – racing into the distance, before swooping in giant circles over a field of bright ­yellow rapeseed.

Then he opens up the throttle and flies directly back towards me at speed before rising slightly, slowing and dropping back on to his small launch platform as softly as a snowflake.

“That was a great way to spend 40 seconds,” says the 42-year-old former Royal Navy reservist, a huge smile spreading across his face. “It’s just like riding a bike, so easy when you get the hang of it.

“Honestly, there is no effort. It works by thrust. When you bring your arms down you go up, and you flare your arms out to come down. It’s that simple.”

No wonder stunt-loving superstar Tom Cruise is desperate to get a piece of this action – he’s in regular contact with Richard.

And don’t be surprised if it turns out that a certain 007 will also be licensed to fly because the producers of the Bond movies have also expressed an interest.

The thrust that propels Richard’s jetpack – named Daedalus after the mythical Greek flyer – is created when compressed air is mixed with ignited fuel, providing the equivalent of 1,000 horsepower, similar to an F1 racing car. 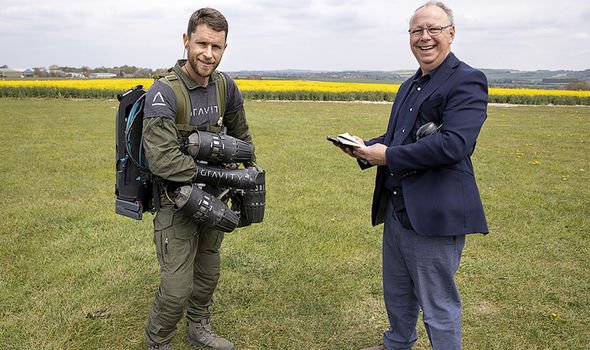 He has perfected the skill of knowing how to control the awesome power that can take him up to 85mph with very small, smooth movements of his arms and body. “On a bike you are constantly making micro adjustments to keep your sense of gravity over the cracks in the road,” he says. “Your mind does it automatically. It’s the same with Daedalus.”

That’s not to say it hasn’t been a steep learning curve. One time he flew to an island off the coast of Wales. His friend Bear Grylls, the television presenter and adventurer, was making the crossing below him on a jet ski. But on the way back, the wind around some low cliffs on the mainland caught him by surprise.

“You should fly parallel to a cliff or wall, but I went straight at it,” he recalls. “I misjudged the momentum and smacked into the side of the cliff. I hit it at about 10mph and was fine, but I did wreck a lot of equipment. I rolled down a slope for about 15ft.

“You have to take risks to make progress, but I am very careful.”

Over the five years since his project began there have been a few burns and plenty of bumps and bruises but thankfully no serious accidents. Constant developmental tweaks reduce the risks. 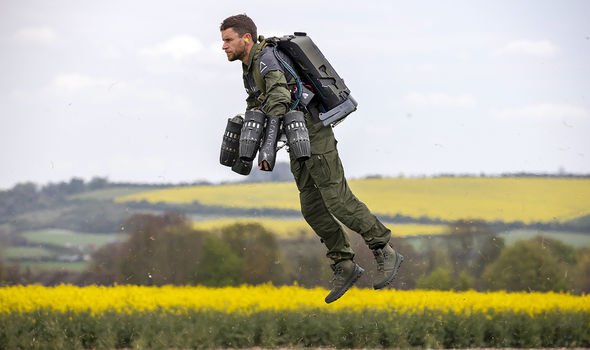 As we chat, he shows me some astonishing moving images that look as though they were shot for a James Bond film.

Aerial footage shows Richard on a Special Boat Service-style speedboat which is pursuing what looks like a small frigate in fairly choppy seas. He takes off and within seconds swoops down on to the bridge of the frigate, tosses a rope ladder over the side to allow marines to climb on board and then flies back to the safety of the speedboat.

Mission accomplished, demonstrating why the military is every bit as interested in Daedalus as the film industry.

During lockdown he was flown to a friendly Middle Eastern country in a giant Boeing C-17 cargo plane for secret week-long exercises. He also helped train Dutch special forces units who are keen to see how to adapt Daedalus to meet maritime threats.

“There’s the fun, entertainment side to this and then there is the serious military potential,” says Richard, who started out as an oil trader at BP where he gained a reputation as an innovator of global technologies.He considered joining the Army, but rejected the chance to go to Sandhurst. His military ambitions were fulfilled when he won his green beret as a Royal Navy reservist. 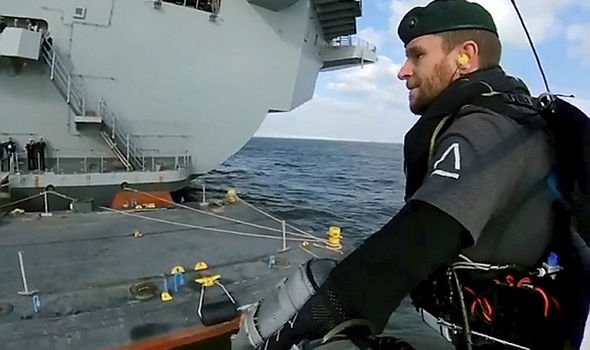 Richard applies that training to the possibilities Daedalus offers. As he scans the picturesque Wiltshire scenery, he spots Old Sarum Castle, overlooking Salisbury.

Surveying the ruins high on a hill,
surrounded by a moat, Richard says: “If you had a unit of marines trained with this technology you could fly up and into the castle top in 90 seconds from here.

“Once seized, they could let other forces in. You probably wouldn’t need helicopters or a lot of infantry.” Although he cannot shoot a weapon while flying – his hands are too busy controlling the jetpack – he has flown with a machine gun strapped to his back, which could be deployed seconds after landing.

“The military world and the military see it as something that can be used in active operations,” he says, guardedly. “I have been involved in some pretty weird training ops, but I can’t say too much about all that.” 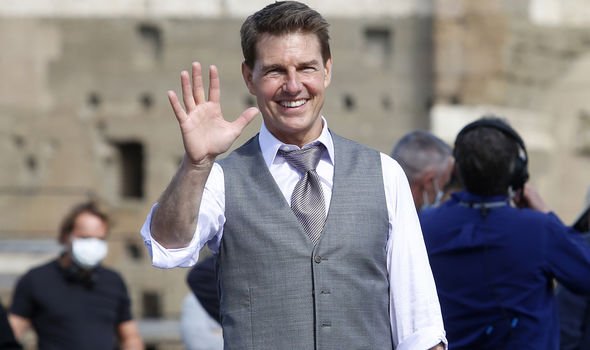 In his soon-to-be-released book – Taking on Gravity – he talks openly and honestly about his inspirational and at times frustrating journey, during which he has often been thankful for the support and understanding of wife Debbie, 41, and sons Oliver, 14, and Thomas, 13.

His own story, he admits, has parallels with the story of Marvel Comics’ superhero Tony Stark, the businessman in the Iron Man suit played by Robert Downey Jr.

Richard had a globe-trotting career with BP, was well off, but in his 30s found himself yearning for more. To learn the basics of flight he examined the wing of a dead bird of prey, then ordered a £4,000 model aircraft engine.

His garage soon began to look like Tony Stark’s workshop. He rigged up the engine to see how much thrust it generated and was pleasantly surprised when it nearly blew over his washing machine.

While out running he mapped out his plan for a suit using more of the small engines. His father Michael had been an amateur inventor with a passion for flight and engineering. Richard has a picture of his father riding a bike with a hang glider wing strapped to his back.

Tragically, Michael took his own life while his son was in his mid teens. It was a devastating blow, but Richard sees his project as a way of paying tribute to his father.

He has a handful of staff working for the firm he founded, Gravity Industries, from his home near Salisbury. The annexe has many prototypes. His latest project is an electricity powered jet suit, which he will unveil later in the year. It can only fly for a short time, but is silent, which is sure to increase its appeal.

“The latest fuel jet suit can fly for about six minutes and takes just 15 seconds to take off, so we are pleased with that as well.”

Richard met Mission Impossible actor Cruise on a Spanish chat show some years ago and they keep in touch by email. “He really loves the idea of being able to fly and I keep him updated with all the developments,” says Richard, who has taken his invention to China, Japan and many European countries for TV shows.

Unsurprisingly, there is a great deal of interest in California, where he has a small office. There have been “discussions but nothing firm” with the makers of the Bond films.

So the Daedalus project is all up in the air at the moment but you can be pretty sure that one day it will get off the ground… and fly.