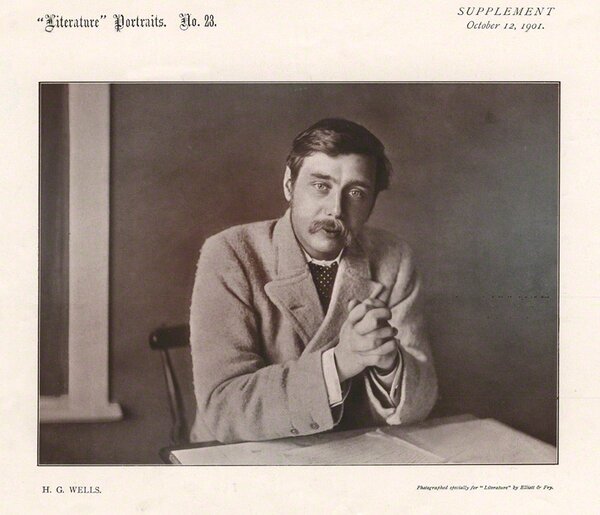 Toward the end of Claire Tomalin’s well-researched biography “The Young H. G. Wells: Changing the World,” she writes:

“I set out to write a book about the young Wells, covering his formation, the years in which he worked, thought and developed his skills as a writer. … He was playful, fun to be with, attractive to women and eager for sex. He had strongly held political views favoring social equality, republicanism and the establishment of world government. He saw himself as a working writer, not an artist in an ivory tower; he was rightly proud of his achievements, and expected to be well paid for his work. And he could be unreliable, selfish and even vengeful.”

This reader shares Tomalin’s fascination with her complex subject because Herbert George Wells (1866-1946), a towering genius successful in many genres, knew, influenced or was admired by virtually every major writer and thinker of his time, between the publication of his first novel, “The Time Machine,” in 1895 and the end of World War II. (Every writer of speculative fiction since then will forever be in his debt.) This list is astonishing for its diversity, including such figures as Winston Churchill, Wells’s teacher Thomas H. Huxley, Bertrand Russell, Conan Doyle, Joseph Conrad, Stephen Crane, George Bernard Shaw, Henry James, George Orwell, Aldous Huxley and architects of the Bolshevik Revolution. As Tomalin writes, “his celebrity was immense,” and as Shaw observed, Wells had in his late-Victorian world “every social circle in the kingdom open to him.”

But he was not born into wealth or privilege, though he and his mother, Sarah, a woman “deeply religious and devoted to the Church of England,” saw themselves as middle-class. We must admire the way Wells managed to overcome poverty and physical illness. “For two years,” writes Tomalin, “the family lived on meager fare — bread and cheese, half a herring for breakfast.” And Wells, as a boy, survived a broken tibia, then later after a rough game of rugby, according to a doctor’s diagnosis, “a crushed kidney and a bruised liver.” More than once, he found himself coughing up blood.