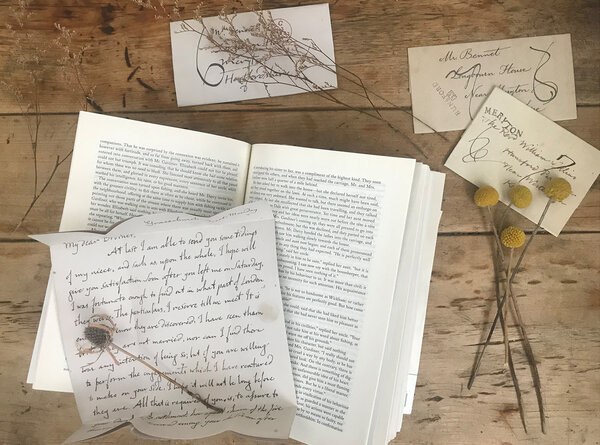 LITTLE WOMEN
The Complete Novel, Featuring the Characters’ Letters and Manuscripts, Written and Folded by Hand
By Louisa May Alcott
Curated by Barbara Heller

Meg, Jo, Beth and Amy might seem too modest, earnest and marriage-minded to appeal to the youth of 2021, and yet the March girls’ fandom is strong. Love, rivalry, independence, ambition, artistic creation, sisterhood — Alcott’s novel explores it all, leaving an irresistibly cozy afterglow to boot. While there’s no shortage of print editions of “Little Women,” this latest offers a gimmick that may be more compelling than color photos of Timothée Chalamet (heartthrob Laurie in the latest film adaptation). Heller, a set decorator for film and television, has peppered it with 17 facsimiles of letters and other paper ephemera from the book, tucked into satisfyingly crinkly vellum envelopes. There’s Mr. Laurence’s letter to Beth (on monogrammed stationery) thanking her for the pair of slippers; Marmee’s note to Jo commending her daughter’s efforts to control her temper; Laurie’s missive inviting Jo to join him for “all sorts of larks.” We even get a foldout replica of The Pickwick Portfolio, the March girls’ self-published newspaper. Deciphering the loopy 19th-century handwriting takes some effort, but readers raised in the age of email and texting will be charmed by the novelty of the (extremely low-tech) interactive experience.

A book devoted to wise old sayings and aphorisms sounds lecturey, but fear not! This ingeniously designed volume is as engaging as a game, one that becomes more rewarding with each round of play. Here’s the setup: Each spread shows a scene of daily life in Africa, from a boy chasing antelope by a river to a nest of hatching ostrich chicks. The authors provide four traditional proverbs labeled A, B, C and D, and it’s up to readers to pick which one they think best narrates the illustration. The scene of the antelope, for instance, could be depicting any of these sayings: “Hurry, hurry has no blessings”; “You can’t chase two antelopes at once”; “Dance in the sun, but turn your back to the clouds”; “A roaring lion kills no game.” Clearly there are no “right” answers — a concept that may itself be eye-opening for children. This is a book that sparks conversation. The proverbs were drawn from more than 25 African countries by Cole, a noted anthropologist and former director of the Smithsonian National Museum of African Art, and LaTeef, who also provides the bright, textured collagelike illustrations. As Cole puts it, “A proverb is a short sentence based on long experience. Whether you are young or old, proverbs can open your mind to a whole new way of seeing the world.”

TIGER, TIGER, BURNING BRIGHT!
An Animal Poem for Each Day of the Year
Selected by Fiona Waters
Illustrated by Britta Teckentrup