Her Book Is About Belonging. She’s Struggling With the Idea. 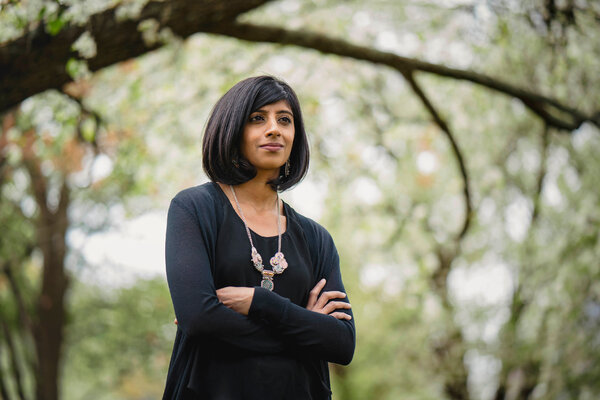 At a sleepover in sixth grade, when she admitted that she hadn’t seen the movie “Grease,” Sanjena Sathian remembers being asked if she was even American.

“I instinctively said, ‘No, I’m not,’ even though I was born here,” Sathian, now 29, said in a video interview from her home in Atlanta. That was typical for much of her life where she, like many South Asian Americans, was made to feel differently.

It took her years to overcome that sense of otherness, but by the time she was preparing for the release of her debut novel, “Gold Diggers,” she felt confident calling herself an American.

All that changed in an instant a few weeks ago, after eight people, including six women of East Asian descent, were killed by a gunman not far from the upper middle class Atlanta suburb where she grew up. The shootings felt close to home for Sathian, both physically and metaphorically.

“There exists this irony where it’s like, ‘Oh, we’re so accepted’ — my family went to fancy schools and my parents are doctors so, yes, that does insulate us in so many ways. And yet. Every day we’re interacting with strangers who carry a million different ideas of who we are,” she said.

“Bullies called me Apu from ‘The Simpsons,’ and when I’m speaking from a place of confidence, I can laugh about that,” Sathian added. “But when you see brutal violence, you realize those small things do add up to something, and it raises the question: What is belonging?”

That quest to fit in is one of the themes of Sathian’s genre-bending novel, which Penguin Press publishes on Tuesday. Set in the fictional Atlanta suburb of Hammond Creek, “Gold Diggers” is about two teenagers, Neil Narayan and Anita Dayal, who tussle with ambition and the American dream as they come of age in the post-9/11 years.

Neil wants to be anything but successful. “I wished everyone would give up on me,” he says at one point. “For it felt, back in Hammond Creek, that it wasn’t our job just to grow up, but to grow up in such a way that made sense of our parents’ choice to leave behind all they knew.”

Anita is, at first glance, the exact opposite. She’s the girl who aces all her classes, wears the Harvard sweatshirt and flings herself into every extracurricular activity imaginable, from volunteering at fund-raisers to joining the cross-country team. Everyone in the South Asian diaspora knows an Anita. She’s bursting with ambition and tirelessly working toward some vaguely defined notion of success.

The two characters “are sort of like the two halves of me,” Sathian said. On paper, she resembled Anita: She got good grades and strove for the Ivy Leagues (though Anita is “a lot hotter than me,” she insisted), but internally she struggled, like Neil, and often felt like she was failing to meet the heavy expectations of her family and teachers.

“It’s comical that I wore this talismanic Harvard sweatshirt and it’s comical how obsessed I was with winning debates,” she said. “But it’s also tragic that I robbed myself of an inner life and made it really painful for myself to underachieve.”

Sathian didn’t end up at Harvard but at Yale. After graduating, she wanted to find a job as a journalist but struggled to land one. She remembered calling her father to discuss the possibility of switching to a career “where it’s possible to be mediocre.”

She eventually became an India correspondent, based in Mumbai, for the Mountain View, Calif.-based digital publication Ozy. She stayed in that role for two years before returning to the United States and diving into the two-year Iowa Writers’ Workshop residency in 2017.

The novel’s plot takes a turn when Neil discovers that Anita and her mother, Anjali, have been melting stolen gold jewelry to brew an ancient alchemical potion in their basement. The potion is said to supercharge ambition, focus and performance so that the drinker can grasp success and perhaps with it Americanness; it is the silver (or gold?) bullet for the anxieties and identity crises of so many children of immigrants.

But what starts off as a small mother-daughter enterprise to help get Anita into Harvard evolves into an uncontrollable series of events that somersaults between different eras and countries — from the American Gold Rush of the 1800s to India in the 1980s to Silicon Valley in the present day. The characters eventually find that mediocrity could be a more sustainable and even radical path (“want less, and you can have everything you want,” Anita declares at one point).

The novel is already generating buzz. In 2019, Penguin Random House entered into a seven-way auction to purchase it, and in February, Mindy Kaling’s production company, Kaling International, announced that it would be adapting “Gold Diggers” for television, with Sathian as one of the writers.

“The magical realism felt fresh to me, and I loved the way she used the genre to reveal a very human story,” Kaling, who will be the executive producer of the TV series, said in an email. “The idea of ambition, whose ambitions you’re trying to serve and its costs and benefits, is compelling.”

The adaptation is still in the early stages, and the company would need to produce a pilot before it is picked up by a distributor or streaming platform, said Jessica Kumai Scott, the president of Kaling International. No one has been cast, and the team is still experimenting with the structure and style of the show.

But for both Scott and Kaling, the book’s characters, particularly Neil, felt familiar, they said, like friends or family members they knew in real life.

The book’s release and the decision to create a TV series are happening just as current events have prompted discussions around Asian-American culture and identity, and what — or who — is considered American.

Days after the Atlanta shootings, Sathian wrote an essay for The Los Angeles Times reflecting on the area, which over time had become what she called an “experiment in pluralism,” with Asian grocery stores and spas standing next to Pakistani-run salons and Ethiopian restaurants.

“On another day, I might have pointed to this part of the country as proof that we had arrived,” she wrote. “This week, all I can see is the fragility of our belonging.”