In his craft memoir, “On Writing,” Stephen King describes a moment in his process when he asks himself the “Big Questions.” The biggest of which are: “Is this story coherent? And if it is, what will turn coherence into a song?”

You can feel King reaching for some Big Questions in his most recent novel, “Later.” Told from the perspective of Jamie Conklin, the narrative shuttles between the immediacy of now and the hindsight of “later” to tell a kind of coming-of-age-as-mystery story, an exploration of innocence and what’s on the other side of childhood.

The only child of a literary agent named Tia Conklin, 8-year-old Jamie is a perceptive kid. Unusually so. He can see dead people. If the premise sounds familiar, don’t worry — the novel assures us that his ability is “not like in that movie with Bruce Willis.” For one thing, unlike the boy in “The Sixth Sense,” Jamie can see the deceased for only a short time after their deaths (a “week or so”). And most relevant for this story: The dead can’t lie. If Jamie asks a question, the departed have no choice but to answer with the truth.

Jamie’s gift (or curse) is exploited by adults, including his mother, who uses it to extract the text of the last unpublished novel written by her recently deceased star client, Regis Thomas, an understandable act of desperation by a single parent on the verge of financial ruin. When Tia’s onetime girlfriend, a dirty cop by the name of Liz Dutton, sees that Jamie’s ability is for real, she uses it to her own career advantage, exposing Jamie to a host of dangers that will lead to dire consequences for both of them. The result is something of a genre hybrid: part detective tale, part thriller, with a horror story filling in the seams.

And the horrors are many. There are hints of evil from another dimension, things from “outside the world” and “outside of time.” But mostly the horrors are familiar ones. Plain old human cruelty. The loss of loved ones to disease or old age. Alzheimer’s. Also, less morbid though no less heavy: the loss of innocence. Growing up too fast. The unexplainable, the incomprehensible in our everyday lives. (Another horror for Jamie: people calling him “Champ” even after he’s asked them to stop.) 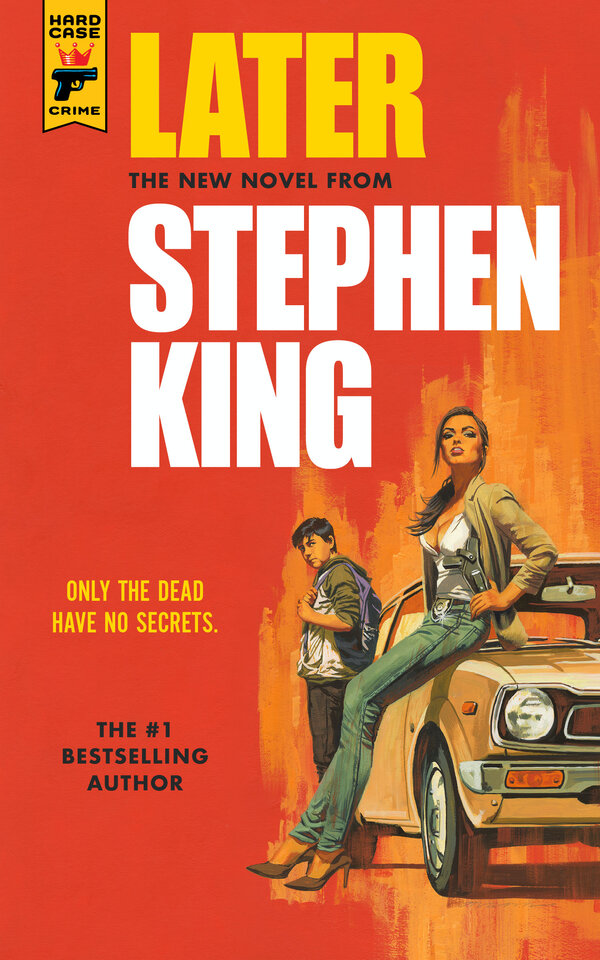 On top of all that are economic precarity and downward mobility, being one unplanned health emergency from disaster:

“First, Mom’s wisdom teeth went to hell and got infected. She had to have them all pulled. That was bad. Then Uncle Harry, troublesome Uncle Harry, still not 50 years old, tripped in the Bayonne care facility and fractured his skull. That was a lot worse.

“Mom talked to the lawyer who helped her with book contracts (and took a healthy bite of our agency fee for his trouble). He recommended another lawyer who specialized in liability and negligence suits. That lawyer said we had a good case, and maybe we did, but before the case got anywhere near a courtroom, the Bayonne facility declared bankruptcy.”

Surprise medical bills, shady lawyers, back taxes — here are the true horrors of life. For Tia, who works in publishing, it’s hard enough trying to make a steady living.

From all of this, King weaves a story of adolescence with a sweetness at its heart — the touching and genuine relationship between Jamie and Tia. Therein lies the book’s strength. King captures in dialogue and description a sense of closeness, the specialness of those key years between childhood and teens, when your mom can be not just your parent but also your best friend and hero.

But this strength is also a liability. Despite its early assurance to the contrary, “Later” is like that movie with Bruce Willis. Beyond the superficial similarities (sensitive kid, single mother, talking to dead people), the emotional core of King’s story — in particular, the parent-child relationship at its center — is also reminiscent of M. Night Shyamalan’s. Whereas the movie evokes depth of feeling through stillness and restraint, King’s novel is more effusive, stating things that could have remained unsaid. And while the earnestness is not necessarily unwelcome, especially given our young narrator, it has the effect of diluting the emotional power of that central relationship.

On a more granular level, King’s sentences snap into each other like Lego bricks, standardized, expertly molded pieces engineered to fit together perfectly. This is not necessarily a complaint; the prose reads easily and enjoyably. To continue the analogy, it’s a bit like seeing an accurate-to-scale roller coaster made entirely of Legos. When you step back, it’s impressive to see what he has built, even if one can’t help wondering whether it would be better if the pieces weren’t quite so fungible. And on further inspection, one sees the places where the rendering only approximates reality, where curves become right angles and true diagonals don’t exist. There’s a trade-off: more coherence, perhaps, but at the expense of making it sing.

But maybe the fungibility of the pieces is the very quality that makes them work. “Later” is yet another example of King’s talent in building stories out of the materials of his choosing, and like so many of his creations, it’s remarkable how well the thing holds together. The pace and ease of reading, the ratio of familiar to new. A roller coaster made of Legos is still a roller coaster, and even if I’ve been on this ride before it doesn’t make it any less fun.