Half the Perfect World review: Paul Genoni & Tanya Dalziell on a creative isle

Towards the end of Half the Perfect World there is a photograph of Charmian Clift and George Johnston that reveals something of the precarity of the writers' inner lives and fractious relationship. 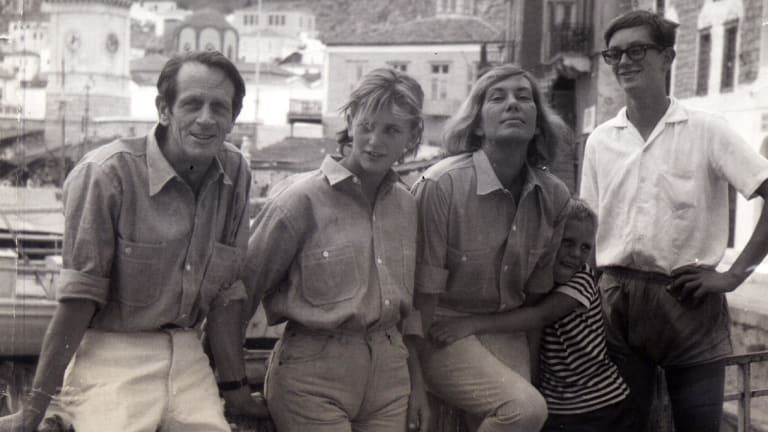 George Johnston and Charmian Clift with their children Shane, Jason and Martin on Hydra.

Shot in middle distance, sitting outside a bar, facing the camera, crisp white shirts contrasting with the shadows in the doorway behind, the two sitters have their faces partially obscured: Clift's by the glass raised to her lips; Johnston's by the hand holding the cigarette before his gaunt face. It's their eyes that give the story away. Clift stares blankly at the viewer; Johnston's glassy gaze has wandered towards some point beyond the frame. There is nothing to suggest much interest in the photographer, Redmond Wallis. Instead, the eyes reveal the exhaustion that comes from too much care, frustration, and betrayal.

It is 1960. Clift and Johnston had been on the Greek island of Hydra for five years. They had met in Melbourne in 1945 when Johnston was married and 35, and Clift was 23. After the war, and with both working in the offices of The Argus newspaper, the scandal of their extra-marital affair drove them to Sydney. After Johnston's divorce, the couple married. London beckoned in 1951. Not satisfied with Johnston's success on Fleet Street, they packed up their two kids and journeyed to Greece to live the life of nomadic writers. With Clift pregnant, they landed on Hydra in 1955. The island offered much: it was picturesque, there was an abundance of sunshine and sea, cheap alcohol and real estate. 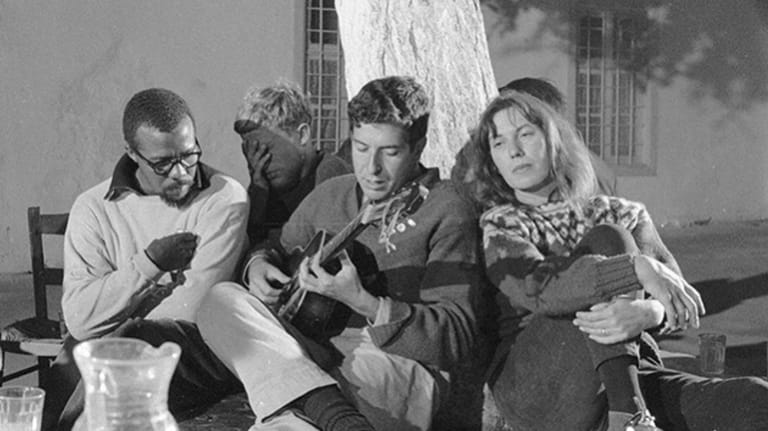 They weren't the first expatriate artists to settle on Hydra. Yet, after buying a home – to be known locally as "the Australian house" – Clift and Johnston formed the epicentre of a community of writers, painters, and sculptors, "drifters and dreamers," who travelled to Hydra to "experiment, drop out, take risks and to embrace a world charged with possibilities".

In many respects, the couple and their family thrived on the island. Yet, Wallis' photo from 1960 captures a sense of Clift and Johnston's failed professional and personal ambitions. With a string of works behind them – some memorable, others not – commercial success had eluded them. As the money dried up, the dream of their island life darkened. It would be another four years of hard work and debt, until the success of Johnston's My Brother Jack. That book brought financial security and fame. Ironically, it would be their ticket off the island, and mark the end of a vital stage in the life of the Hydra artistic community.

Famous for their hospitality, Clift and Johnston went out of their way to help other arrivals. They provided meals and shelter, as well as introductions to locals to assist with accommodation and bureaucracy. And outside Katsikas', "a one-stop kafenio, bar and grocery" on the dockside, and in the taverna of Douskos and the "new" Lagoudera club, the Australians were often the centre of conversation.

One recipient of the couple's generosity was a young Canadian poet called Leonard Cohen who bought his own home on Hydra. It was at Douskos on a summer evening in 1960 that LIFE magazine photographer James Burke took a series of iconic images, most prominently featuring Cohen playing guitar and with Clift beside him. Looking on is Marianne Ihlen, Cohen's lover and muse. 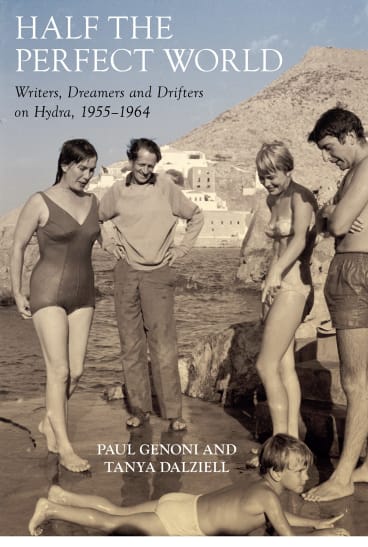 Half the Perfect World by Paul Genoni and Tanya Dalziell.

Burke's photography provides a wealth of detail to Half the Perfect World. Burke and Johnston had worked together during World War II. Johnston had heroically saved the American's life. In the late 1950s, Burke documented the artistic avant garde of New York for LIFE. In his pitch for a photoessay on Hydra he talked up the community's Beat credentials, and the role played by Clift and Johnston. LIFE initially agreed to publish Burke's photographs, but they never made it to print. Instead, the images emerged on the internet in 2009 in an archival partnership between Time Warner and Google.

Burke's photographs – especially of that night at Douskos – capture the youthful spirit of place that Cohen describes: "Everybody was beautiful and young and full of talent and covered with a kind of gold dust. Everyone there seemed to have very special, significant, unique qualities. [E]veryone to me looked glorious, and all our mistakes and all our betrayals were important betrayals and everything we did was informed by this glittering significance."

Burke's photographs also provide an insight into the intimate lives of his subjects. The interior shots of the "Australian house," of Johnston and Clift working, drinking, playing, carousing and brooding, are intriguing portals into these characters. Often the photographs reveal the menial work required on an island of few amenities – work that inevitably fell on the shoulders of the expatriate women while their idealistic male partners were busy with more artistic matters.

The other important chronicler is New Zealander Redmond Wallis, whose diaries, correspondence, unpublished manuscripts, and photographs provide a repository of stories, insights, and gossip. Wallis and his wife Robyn arrived on Hydra in 1960. Encouraged and aided by Johnston, and despite his painful awareness of his own limitations, Wallis tried his hand at fiction.

One outcome was an unpublished novel, The Unyielding Memory, a thinly disguised account of Wallis' time on Hydra. Each chapter of Half the Perfect World ends with an extract from Wallis' manuscript that casts an idiosyncratic light on various facets of life on Hydra.

The records of Burke and Wallis play a key role. Yet, by drawing on a rich archive of writing and photography from a plethora of firsthand source, Paul Genoni and Tanya Dalziell have crafted a superb book that examines the dynamics of a group of singular individuals in a particular time and place.

Deeply researched and erudite, written in an engaging style, and wonderfully illustrated, Half the Perfect World tells a story of Hydra as a home for creative bohemianism in the late '50s and early '60s. And as such, it carefully explores the ironies of artistic communities, particularly the fraught relationship between art and commerce, in this case tourism. For many of the qualities that made Hydra attractive to artists and beatniks also made it a drawcard for tourists. And in time, as mass tourism in the Mediterranean burgeoned, that community would become another of Hydra's attractions.

Yet, for all its detail of expatriate life on Hydra and the characters who congregated on the island, Half the Perfect World will become a vital text for all who are interested in the lives of Clift and Johnston: two of the most mercurial figures in modern Australian writing. The book's examination of Hydra is bookended by the arrival and departure of the Australians, and its detailing of island life constantly returns to them.

As much a labour of love as robust scholarship, sympathetic though by no means sentimental, Half the Perfect World avoids judgment or censure. Genoni and Dalziell's humane scholarship illuminates the legacies of Clift and Johnston who, in Cohen's words, "had a larger-than-life, a mythical quality. They drank more than other people, they wrote more, they got sick more, they got well more, they cursed more and they blessed more, and they helped a great deal more. They were an inspiration. They had guts. They were real, tough, honest. They were the kind of people you meet less and less."