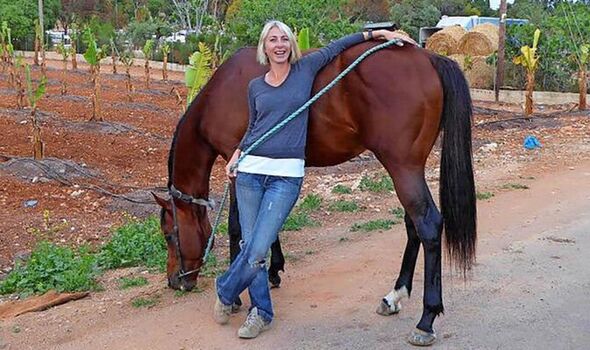 As I write, I can still feel the warmth of my boy’s distended belly at my back, slowly cooling as I struggled with the kind of ­bombshell grief that accompanies sudden and unexpected loss. Even now, I want to cry for him. I have no recollection of driving home that night, but somehow I must have done, because I fell into an exhausted sleep and when I awoke, I was in my own bed. As soon as my eyes opened, I reached for my watch. It showed 1.24am. Stuck forever at the hour he died. I haven’t worn a watch since.

So far, so heartbreaking. But when I say that my bereavement did not involve a child, a parent or a partner, I can almost feel your empathy begin to evaporate. And when I tell you that the one I still mourn was my beloved horse Achilles, I suspect it’s already being downgraded to passing sympathy.

Because the loss of an animal, no matter how dear to us, is seen as something almost trivial when compared with greater losses, human losses.

But that’s not to say it should be diminished or made light of.

There is no quick fix for grief and in the weeks that followed Achilles’ death I struggled to make sense of what was left of my life without him. I wanted to speak about him, but I couldn’t talk without crying.

And this is how it was for a few weeks. Talk was exhausting. Tears were constant. And my body physically ached with loss. My mother was so concerned she suggested I go to the doctor, but I wasn’t depressed, I was just very, very sad.

The pain we suffer after loving and then losing a pet has been well documented. History is littered with grief for, and tributes to, faithful companions.

The ancient Macedonian king Alexander the Great was so devastated by the loss of his horse that he named a city after him, Bucephala – a variant of the horse’s name Bucephalus – now thought to be modern Jhelum in the Punjab province of Pakistan.

For those of us without access to the same resources as empire builders, beloved pets have been mourned and remembered in many different ways. Tattoos are now ­common – Orlando Bloom and his labra-doodle Mighty, Jennifer Aniston and her corgi-terrier Norman as well as Miley Cyrus and her dogs Floyd, Emu and Mary Jane.

I too mourned the passing of Achilles with a tattoo, inscribing on my left shoulder blade the kind words sent to me by a friend: “When the sky turns grey, the sound of thunder is him and his herd coming to comfort you.”

I also dedicated my fourth novel, Untethered, to Achilles’ memory.

Like Alexander the Great, I wanted this incredible creature who had given me so much to be immortalised and remembered, even if only for the length of a print run rather than centuries.

Achilles was only seven years old when he died. Colic is an umbrella term that tends to be employed for all manner of gastric equine illnesses and it can be – as you now know – a fatal condition for horses.

Surgery is available and often successful, but the facilities needed for it have yet to reach Cyprus, where I live. So, Achilles fought for as long as his body could take it before dying in my arms. At least I was with him at the end. Winston Churchill, a man who had fought one war and led his country through another, was almost broken by the loss of his beloved pet.

His poodle Rufus was run over and died in 1947 while he was away at a conference, but he found some comfort in a “replacement puppy”, another poodle he called Rufus II, which looked very much like the first dog.

But when the second dog became ill, in letters that were later auctioned, Churchill wrote of his heartache and how he couldn’t bear the pain of losing yet another dog. Fearing the worst, he wrote to the kennel owner caring for the pup: “After the sad loss of the first one, I feel that I would rather not have another dog just now. Please do not therefore look for another poodle for me.”

Thankfully, Rufus II pulled through and lived another 15 years. Like Churchill, many grieving animal lovers find solace in “replacement pets”.

I was no different. Three weeks after Achilles died, I brought home a retired racehorse called Lucky Star.

In a way, Lucky saved me. The hole left by Achilles was simply too big to navigate on my own and Lucky arrived to fill at least part of that void. He gave my life ­purpose and focus, and slowly, my grief became more manageable – as it had to be because there is an unspoken shelf life for crying over an animal.

In December last year, researchers at the University of Alberta in Canada conducted a study of women aged 55 and older who had experienced “disenfranchised grief” after losing a pet. According to one of the paper’s authors, Cary Brown, the women were careful about who they shared their feelings with, fearing a dismissive response.

She said: “Many of the women chose to stay home and grieve alone, only telling a few close friends or family about the death. One of the women was told, ‘Oh come on, it’s just an animal.’

“But people would never say that to ­someone who had lost a spouse. So instead of normalising the grief and being able to talk about it, they shut down and feel worse and worse.

“When you’re grieving, the last thing you want to have to decide is who you tell. You’re already upset and you don’t want to have to pick and choose. It’s a sad reflection on ­society that people would feel inhibited to talk about their loss.”

While I have never come face-to-face with the same insensitive response to my horse’s death, I was fully aware that at some point I would need to keep my tears and memories to myself. To put it bluntly, people get bored with misery. But after a while, that was OK.

While Achilles’ death was tragic, in the end it also brought me a strange sense of contentment. When I say that time stopped still for me when he died, I mean it. From that moment on, I stopped clock-watching, I lived more in the moment and I resisted stressing about things I couldn’t change or that didn’t actually matter.

The house I own is just a house, the car I drive is just a car, the bills – with any luck – will be paid eventually, and the life I live is the way I want to live it.

I am surrounded by animals, which means I am surrounded by love, and I cherish each and every moment I have with them because I am fully aware that sometimes life is short – and for the animals in our lives, it’s always going to be shorter than we’ll ever want.