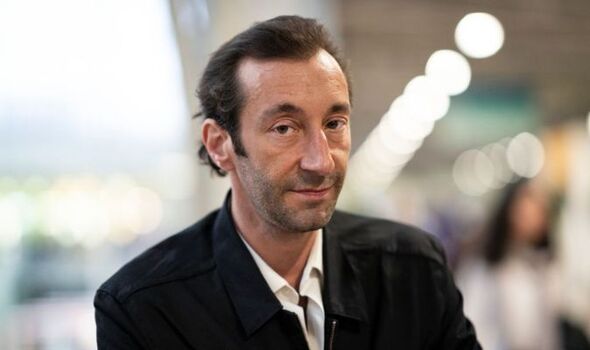 Describing the recommended books as her “dearest friends”, the Duchess continued: “In these challenging times when we are isolated from the ones we love, many of us are finding comfort in reading, to fire up our imaginations, to take us on journeys and to make us laugh.”

It was a timely intervention, aimed at helping people through lockdown, and the overwhelmingly positive public response undoubtedly inspired the Duchess to launch her Reading Room book club, now in its fifth “season” with two dozen titles under its belt and millions of fans.

But amid those early recommendations – ranging from Charles Dickens and Elizabeth Jane Howard to her own, late brother Mark Shand, whose Travels On My Elephant made the list – was a lesser-known gem, The Red Notebook by Antoine Laurain.

“A clever, funny novel… a masterpiece of Parisian perfection,” wrote the Duchess, who is said to consider its quietly unassuming author her favourite French writer.

Its plot is charming in its simplicity – a man falls in love with a woman before meeting her in the flesh.When a middle-aged bookseller finds an abandoned handbag in a Parisian sidestreet he vows to return it to its owner. The bag is almost empty, except for a red notebook of handwritten musings. The hero, Laurent, finds himself falling for their writer who, readers discover, has been mugged and fallen into a Sleeping Beauty-like coma.

Using clues in the notes, he sets out to find her, sparking a touching story of two lonely souls adrift in a huge city.

“I wanted a love story that followed paths not beaten,” explains the author. “I dreamed of two strangers capable of falling in love, without first seeing each other, only through the few clues contained in a bag.”

The book is a modest 240 pages, almost filmic in its simplicity, and yet profoundly moving. Camilla clearly saw Laurain’s take on traditional Paris joie de vivre, like millions of others, as antidote to the world’s problems. Which is how the softly-spoken writer, whose book was the only French title on the original list, found himself invited to Camilla’s London residence, Clarence House, for a Reading Room reception in the autumn.

“Charles Dickens was on that first list but he wasn’t available for the party,” jokes the antiques dealer turned bestselling author.

Although he was already a cult success, his books translated in 22 countries around the world, Camilla’s intervention helped push the Frenchman into the mainstream. Laurain, who lives in the French capital, was surprised at the Duchess’s patronage. “A friend of hers offered the Duchess The Red Notebook and she was delighted by it,” he says.

“I have a friend who is a bookseller in London and she called me to tell me I was on Camilla’s list. I asked my publisher to send me a special edition which I signed and sent to her. She wrote me a very personal and very touching letter.

“It was quite amazing for me to be in Clarence House. Life is really strange. You write a book at home and, many years later, you meet the Duchess of Cornwall and Prince Charles to talk about that book. Of course, it’s a great honour.

“She said she enjoyed it because of the simplicity of the story and the two characters. She liked the chance meeting between a woman and a man in the same city. Yes, the two characters live in Paris but at the end it’s not simply a French story.

“I think The Red Notebook is more universal because every woman in the world gets a handbag and a man could find this handbag and maybe fall in love with the owner. I was born in Paris so it’s easier for me to have a story which takes place in my city. But you could imagine the same story in London or New York or Rome.” Like the Duchess of Cornwall, Laurain, 49, believes books are more important than ever in challenging times.

“You need quiet time to read a book on your chair or sofa,” he explains.

“You take this time, this moment of silence to read. It’s very different from looking at the TV and, I believe, very important.

“My books are optimistic because feelings and human nature and love and friendship are the most important part of life.

“Books for me have to be better than life. If you feel better after having read one of my books, I’ve done my job.”

Laurain looks like a young Serge Gainsbourg, and has the same slow, laconic charm as the late French music legend. He saves his best words for his art, rather than wasting them in general conversation, and favours finely cut suits and flowery silk scarves. As to why he chose a woman’s handbag as a starting point for a novel, he says: “I have always been fascinated by the world of women’s bags.You can draw the contours of a woman from what’s inside. That’s why I first asked all my friends to make a list of what they put in them. I wanted a kind of inventory of femininity.”

Asked whether he got a chance to glimpse inside Camilla’s handbags he laughs: “It would have been interesting but I think she has an assistant to hold her handbag.” Not that the lunch at Clarence House wasn’t interesting. In between chatting to hosts and fellow authors like Elif Shafak and William Boyd, whose literary thriller Restless was another of Camilla’s early picks, Laurain had a chance to cast his antique dealer’s eye over her treasures.

“There were some wonderful paintings and an amazing collection of snuff boxes. Very beautiful, probably from the 18th or early 19th century. Probably they were in the family for generations,” he says. We are talking to mark publication of his new book, Red Is My Heart, an off-beat collaboration with the Parisian street artist Le Sonneur (sometimes considered a French Banksy).

It’s a haiku-like combination of Laurain’s thoughts on a relationship that has ended and its fallout, with playful illustrations scattered among the stories.

But which came first, the words or the pictures?

“He made the drawings first and afterwards I wrote a story a little bit like a diary connected to the drawings,” says the author. “You can read just one page of the book, then put it down, and then read another page later. It’s not a novel, there is no plot.”

Laurain remains relatively tight-lipped about his personal life, but says his ginger cat, Ploum, is a close companion.

“My cat is my personal assistant, he came one day from the Paris rooftops, through the window, and we have decided to stay with each other. He has adopted me.”

His writing process, he explains, involves Ploum sleeping on the sofa next to him, and he finds it easy compared to selling antiques.

“I was an assistant to an antique dealer for a few years,” he explains.

“I thought I would stay there for a year, I stayed there for 10 years. It was there that I started to write, while I was waiting for customers.”

The Red Notebook aside, Laurain’s most famous work to date is The President’s Hat – a book that mythologises the spiritual powers of former French President François Mitterand, who died in 1996. In his last address to the French people, Mitterand, who succumbed to cancer aged 79, said: “I believe in the forces of the spirit, and I won’t leave you.”

Since picking Laurain’s novel, Camilla’s book club has gone from strength to strength (in a heartfelt message, she dedicated the second “season” of her picks to the late Duke of Edinburgh, himself an avid reader). Describing reading as a great adventure, the Duchess says: “You can escape, you can travel, you can laugh, you can cry, there’s every kind of emotion humans experience in a book.”

And as for his own royal patronage, Laurain admits that some of his friends back in Paris suspect that he has made the whole thing up.

“Some of them think it’s a joke because I have no pictures,” he smiles. “You have to leave your mobile phone at the entrance to Clarence House.”

Let’s hope this settles it once and for all.