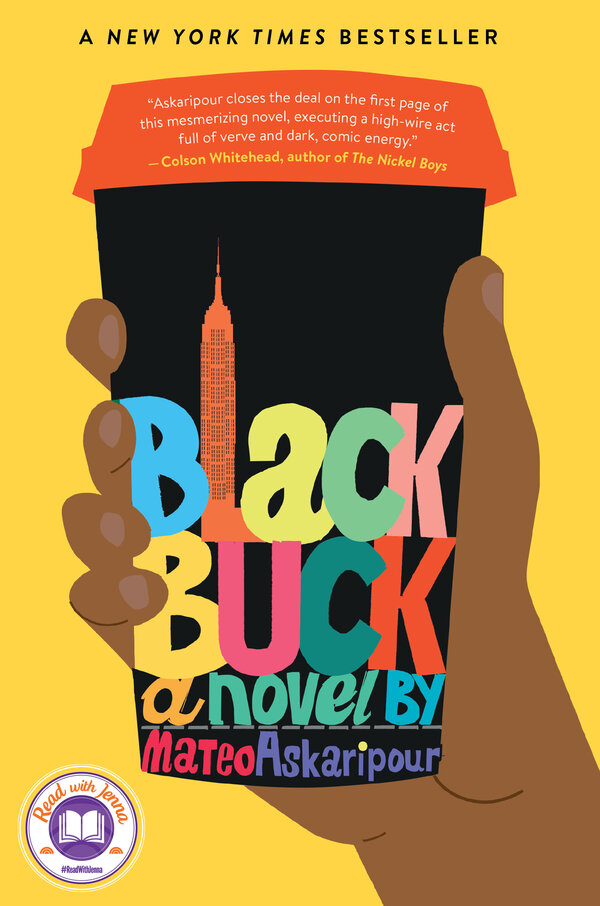 This winning novel — or is it a self-help book? — opens with a striking proposition: “MLK, Malcolm X, James Baldwin, Jean-Michel Basquiat and Frederick Douglass were all salesmen.” And the purpose of this book, the titular Buck writes in his prefatory “Author’s Note,” is to “help other Black men and women on a mission to sell their visions all the way to the top.” Teetering between biting satire and complete earnestness (interspersed throughout are callouts with real sales advice), Askaripour’s novel charts the unlikely metamorphosis of Darren Vender — a 22-year-old former high school valedictorian who works at Starbucks and lives with his mother in a Brooklyn brownstone — into Buck, who appears on morning talk shows as “the best salesman in New York City” and does bumps of cocaine in the back seat of his chauffeured car.

The key to his transformation is Sumwun, a start-up with all the trappings of a ragtag company flush with investor cash (free swag, anarchic business practices), where Darren lands a job as a sales rep. What follows is high corporate fantasy: As he accepts Sumwun’s messianic ideology and the name his blatantly racist manager gives him, Buck single-handedly saves the company from total collapse and methodically destroys every relationship tethering him to his old life in the process — until he’s given a chance at redemption. What’s not fantasy, though, are the all-too-believable tone-deaf or actively malicious slights Darren/Buck faces at his lily-white office. Thankfully, his quick wit provides cathartic delight: “I should’ve known from the Middle Passage to never trust a white man who says, ‘Take a seat.’”

Anvar’s family moves from Karachi to “the suburbiest suburbia” in California’s Bay Area in the late 1990s; Safwa ends up in San Francisco in 2016 after immigrating illegally from Pakistan with her troubled conservative father. Alternating between their stories, Masood’s novel presents a stereoscopic, three-dimensional view of contemporary Muslim America: the way historical conflict in the Middle East lingers in individual lives, the way gossip travels in a close-knit immigrant community.

But swapping between these two perspectives also involves disorienting shifts in register. Anvar’s sections tell a fundamentally comic story of growing up a smart-alecky misfit. “I practice Islam at a fourth-grade level,” he tells the imam of his local mosque. For a while, his biggest problems are his crappy apartment and his anemic career as a lawyer and his unresolved feelings for his college girlfriend a decade on. Meanwhile, Safwa — or Azza, as she’s now called — is either being beaten by her father or receiving sexual threats from Qais, her menacing betrothed. Odder still: When our two leads finally meet, 162 pages in, they immediately fall in bed together.

Admittedly, Anvar’s story is more convincing. He’s unfailingly funny, frequently annoying and much more alive than Azza, whose grim life and secretive intensity make it difficult to see her beyond her circumstances. But her perspective is clarifying, too. Americans “didn’t know the world at all,” she thinks, observing the national obsession with the 2016 election. “They thought it was smaller than it was, and that they were bigger than they were.”

To be poor in America is to constantly be aware of how close you are to empty. Henry, the protagonist of “Abundance,” measures distances in gallons of gas, stockpiles free ketchup packets (“a reserve of sugar for later hunger pangs”), and scrimps enough money to treat his young son, Junior, to a birthday meal at McDonald’s and one night at a motel — a luxury after six months of washing up in public restrooms and sleeping in Henry’s pickup. It’s fitting that each chapter of Guanzon’s relentless novel begins with the amount of money Henry has: Unexpected expenses, over the course of one day, torpedo Henry’s careful plans toward upward mobility in an excruciating slow-motion cascade.

Throughout, we see glimpses of Henry’s past that explain his present: inherited medical debt, a five-year prison sentence for selling opioids that makes job prospects slim, the departure of Junior’s drug-addicted mother. “I’m right here,” Henry tells Junior over and over again; it’s all he has to offer. Close to the end of the book, though, this refrain morphs into a message to those who would avert their eyes from our societal ills. “Look at me, look at my son,” Henry says. “We’re right here.”

This is worthy but heavy stuff, and the novel occasionally staggers under the weight. Henry feels more like the sum of his identities — father, felon, half-Filipino — than a fully-fleshed character, consumed by his fears of turning into his own embittered immigrant dad. Instead, what “Abundance” captures is how mundane poverty is, and how psychologically punishing.

The narrator of “The Scapegoat,” at first, seems like your prototypical absent-minded professor: He’s employed at a prestigious university and keeps losing track of time, brooding over 30-year-old regrets. But he isn’t a professor; instead, he’s what a colleague calls a “glorified secretary,” having been installed at his post by his distant father, a powerful university administrator who has recently died. It’s the strange circumstances around his father’s death (never described) that lead him on the investigation that structures the book.

Though one gets the sense that the “investigation” proceeds despite the protagonist’s meager efforts. “I had read two horoscopes, one relevant, one not. I’d gone to a hotel, a restaurant, an open house; under a pseudonym, I’d acquired an empty leather briefcase,” he sums up, in a convenient and characteristically self-referential meditation more than halfway through the book. His every move seems orchestrated by a shadowy group of fanatical academics; they blame him for his father’s involvement in a hotel that was built on the site of a former mission, where Native Americans were historically slaughtered.

As our narrator loses his grip on reality, Davis drops her readers into successive scenes so fluidly that even we forget what just happened. I raced through the book, marveling at its precise, restrained prose and grasping paranoiacally at small details that might indicate what was real and what wasn’t. What does become clear by the end, though, are the dangers of dwelling on past miseries, which so thoroughly haunt the novel.