FOWL PLAY: A HISTORY OF THE CHICKEN FROM DINOSAUR TO DINNER PLATE

Poor old chickens. Their close relative, the pheasant, can be a tough old bird. Goose is rather fatty and gamey, and turkey can, frankly, be dry and boring.

But it is the chicken’s doom to taste just perfect. No wonder we eat a jaw-dropping 66 billion of them a year, many raised and slaughtered in the most inhumane conditions — ‘misery meat’ as the author calls it. Today’s world chicken population is three times greater than ‘all the other wild bird species combined’.

Sally Coulthard is no vegan and doubtless enjoys a good roast as much as the rest of us. But in Fowl Play she portrays them as intelligent, characterful and even affectionate birds, and she should know: she keeps them on her smallholding in Yorkshire.

Her favourite is a cockerel called Andy, a real softie. He ‘feels no shame in coming to the window for a tickle under his wattle’, or to be ‘cuddled tightly and maternally jogged up and down, like a pudgy baby’. Some of her chickens live to a remarkable 13 years old. 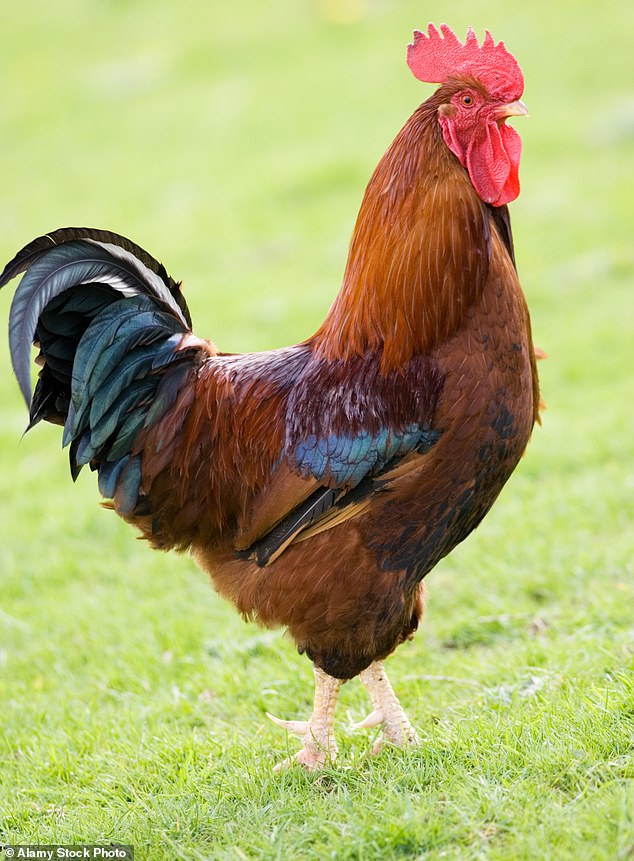 Poor old chickens. Their close relative, the pheasant, can be a tough old bird. Goose is rather fatty and gamey, and turkey can, frankly, be dry and boring (stock image)

Our language remains rich in chicken-based idioms, from walking on eggshells to ruffled feathers, the pecking order to coming home to roost — not to mention ‘coquette’ (helpfully explained by an early dictionary as meaning ‘a fisking or fliperous minx, a titifill, a flibergebit.’) Chickens seem to be birds with which we are all very familiar yet know very little about.

Fowl Play sets out to rectify that, stuffed with numerous, hugely enjoyable ‘things you never knew about chickens’.

One of the great mysteries revealed by archaeology suggests we domesticated chickens long before we ate them. Maybe we just kept them for eggs, but another intriguing idea is that they were owned as fighting animals and status symbols. The cockerel can be a ferocious creature, genetically alarmingly close to its direct ancestor, Tyrannosaurus Rex. Put two in a ring together and you have a cruel, bloody — but for some, compelling — spectator sport.

The chicken was also venerated and wreathed in superstitious beliefs. Never mind Viagra, according to the Roman writer, Pliny the Elder (AD 24-79), a gentleman suffering difficulties in the bedroom should wear the right testicle of a cockerel about his person and all will be fine.

The cockerel’s sexual potency lies behind the somewhat unappetising recipe for ‘Cock Ale’ from the 17th century, which quite literally involves boiling up a ‘March cock’ in eight gallons of ale, along with raisins, dates and nutmeg, storing it for a month and then drinking it.

A pamphlet of 1674 even urged the men of London to drink Cock Ale rather than this new-fangled coffee to maintain their manhood, otherwise husbands might ‘run the risk of being Cuckol’d by Dildo’s’. We’re a long way today from regarding chickens as sacred.

We may plume ourselves on our superior kindness to that of our forefathers, having abolished cock-fighting; and we would no longer prosecute a cockerel in court ‘for the heinous and unnatural crime of laying an egg’, as they did in Basel in 1474. (The offending trans-cockerel was burned at the stake.)

But perhaps our ancestors might have been horrified how we blithely treat, or mistreat, millions of battery hens. Birds that are kept cooped up indoors all their lives develop ‘crippling leg weakness, poor plumage and a whole host of skeletal problems’.

Yet this is a very recent development. For centuries, chickens simply pecked around in the farmyard and were mainly kept for their eggs. They were too valuable to eat and besides, as Coulthard points out, when the English countryside was still teeming with wildlife, you were spoilt for choice. At a banquet in the court of King Richard II you might dine on quail, swan, curlew and woodpecker. Why waste a good egg-laying chicken?

Capable of living for up to ten years, today’s shrink-wrapped broiler chickens are born, fattened up and killed in ‘just seven weeks or so’. You’re basically eating ‘a super-sized toddler’.

It literally has more room in your oven than when alive, given that broilers are stocked at a revolting 15 birds per square metre.

Although largely a genial and wonderfully diverting read, with little hectoring or guilt-tripping, there’s no doubt that Coulthard’s portrait of this wonderful, under-rated bird will make the reader reconsider their eating and shopping habits, if they have not already done so.

No, it’s nothing to do with ‘veganism’ or anything. It’s just a gentle plea to be more mindful of where our food comes from, at what real price, and how it might impact our own health as well.