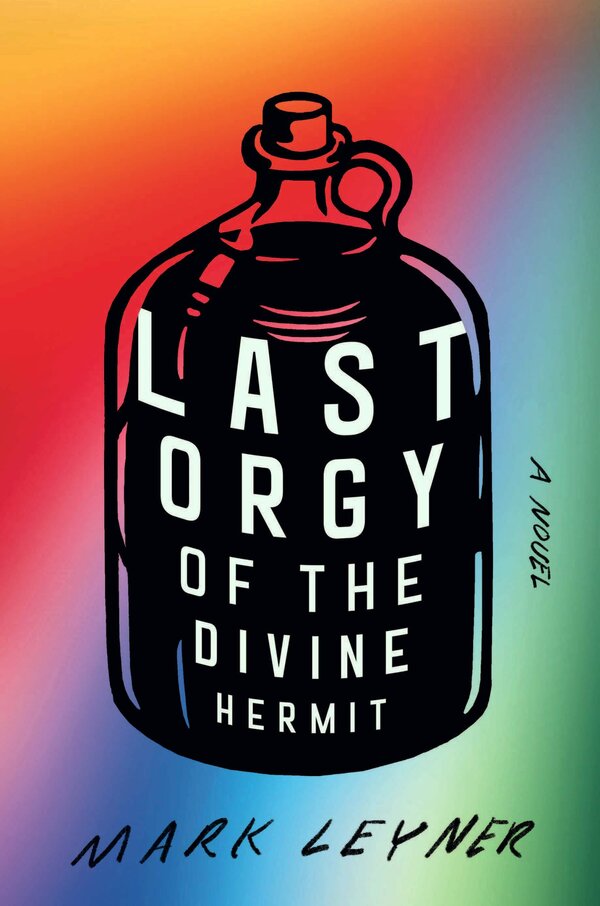 • warring criminal gangs that distinguish themselves by their colognes

• “If Joan Rivers had gone to the electric chair instead of Ethel Rosenberg, this is the book she would have written”

As in most of Leyner’s novels, like “Et Tu, Babe” and “Gone With the Mind,” these little joke-bombs go off on nearly every page. The reader has to stop to figure out what they mean and why (and whether) they’re funny. This can be a slog. It’s also a weirdly exciting reading experience.

“Last Orgy of the Divine Hermit” poses as an ethnographic study of the fictional Eastern European nation of Chalazia. Actually, the novel excludes the study, consisting only of an introduction and an epilogue. The introduction is being recited by a patient in a New Jersey optometrist’s office: She’s reading it off an eye chart through a phoropter (the device used to determine lens prescriptions). “Is it better like this … or like this? One … or two?” the optometrist asks, switching lenses. The epilogue dramatizes a tender scene between the author of the study, Mark Leyner, and his loving daughter, Gaby. They visit a Chalazian karaoke bar on a Thursday “Father/Daughter Nite,” where they read endearments off a screen, just as the other fathers and daughters in attendance do. Perhaps none are the real Mark and Gaby.

The serious work of this comedy is to depict a father’s love for his daughter and their shared recognition that they won’t always be together. It’s played out across a hall of mirrors, an “infinite regress of fathers and daughters.” The situation arouses pathos, which Leyner acknowledges before relentlessly hyperbolizing, satirizing and detonating the pathos. The novel’s underlying poignancy, however, remains intact.

The narrator of “Marshlands,” a writer, is being driven mad by ennui. He’s miserably aware that human beings can’t be anything but themselves, defined by their personal characteristics and imprisoned by routine. He rails against the sameness of the daily tasks they’re forced to perform: “We do it again precisely because we have done it; every one of our acts from yesterday seems to want us again today, like a child to whom we have given life and who demands from then on that we keep it alive.”

Maybe he’s been in lockdown too long with his kids.

In fact, “Marshlands” was written by the French novelist and journalist Gide, whose career extended from the late 19th century to his death in 1951. This was an early book, first published in 1895. Searls, a prolific translator, has annotated the revised 1932 edition and rendered it into vivid American English. His admirable efforts, however, are not quite enough to lift the novel beyond the status of a minor work.

The narrator is writing a novel also titled “Marshlands,” about a man named Tityrus, from Virgil’s “Eclogues,” who lives in an empty, grassy region. The writer wants the novel to express his own “boredom, vanity, monotony” — not usually a promising idea for a book. Yet there’s something compelling in Gide’s perception that all of us are trapped, regardless of the pandemic, in some kind of lifelong lockdown, the days essentially featureless, relieved only by trivialities like our meaningless work, our predictable cultural products and our irrelevant public affairs.

The critic Dubravka Ugresic’s exuberant preface claims for “Marshlands” a charm on the order of “Winnie-the-Pooh.” She more persuasively compares it to Ivan Goncharov’s “Oblomov,” the 1859 Russian novel about another affluent 19th-century man. He too is burdened with the mysterious privilege of human existence.

In her richly meditative lyric memoir, Hume poeticizes the life of a woman whose childhood was marked by sexual violence. What the reader may initially find challenging in her convergence of intimate personal history and classical mythology soon turns deeply absorbing.

Hume invokes the Greek heroine Atalanta, the ferocious hunter raised by bears and the slayer of centaurs who try to rape her. Even offstage, Atalanta remains the embodiment of animal courage. Her cunning and resilience, especially against male predation, must be summoned by a girl trying to survive her western Pennsylvania childhood. Hume repeatedly suggests incestuous brutality: “the memory of his huge hands down your pants.” She explains, ominously, “If there’s one thing the woods do not need to tell her, it is what a body standing over her at night means.”

In her damaged adolescence, “the dark, lanky teenage girl” hums to herself as she walks swiftly through the threatening woods, hums everywhere, contemplating what the act of humming represents. It’s “the sound of my captivity,” she says. “The only intimacy I had available.” She continues to hum even while performing fellatio. For the young woman, “my sonic ornament was a customized flush of puberty, a condensed libidinal vehemence.” She eventually passes into adulthood and becomes mother to a 3-year-old girl who develops her own personal relationship with the unseen world, specifically the wind. Her daughter is terrorized by it, suffering raw pain in the open air. The wind’s mythologically sexual aspect can be aggressive, relentless and even, in some legends, germinative.

“Saturation Project” is sometimes elusive, but there’s no meaning in it that gets lost for long. When Hume’s thematic connections and redemptive insights arrive, it’s with the force of a hurricane.