Pour some faerie wine and try not to get too caught up in the music, because it’s time for us to return to Elfhame. That’s right, the queen of faerie herself, Holly Black, is taking us back with the help of some very familiar faces. After the end of The Queen of Nothing left us wondering if there was anything left in the Folk of the Air series, Holly has secretly been hard at work on the next story.

“I actually knew I was gonna do this when I was finishing up Queen of Nothing. I was working on my first adult novel, Book of Night, through most of the pandemic, but I was looking forward to coming back to faerie, characters I knew, and a world I’m so familiar with and really enjoyed being in,” she revealed to Cosmopolitan. “I didn’t want to have it be too long since I’d been there. I’ve gone back to faerie so many times that I think it’s a settled fact that I will continue to go back.”

And now Cosmopolitan is exclusively announcing the new Book of Elfhame and yes, this is an entirely new series following Oak and…wait for it…Suren!

“I do not think it’s part of Folk of the Air. I want to indicate that this is a little bit different and it’s about a few different people,” Holly said.

The new duology will start off with The Stolen Heir and here’s a little bit of what you can expect from Little, Brown Books for Young Readers:

As with the original Folk of the Air trilogy, the book will be released with a regular edition cover (as seen above) and a Barnes & Noble Special Edition cover which you can check out below: 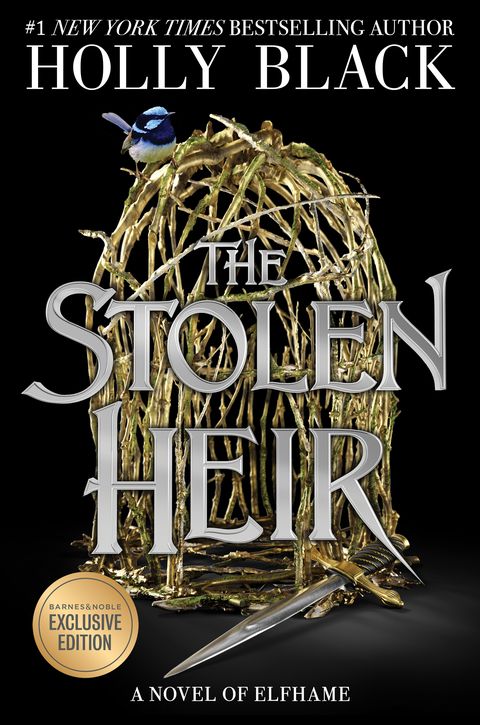 Mark your calendars, because both editions will be available on January 3, 2023.

Now, we know that you want even more info. Which is why we sat down with Holly who revealed a little bit more about what we can expect from Oak and Suren, how it’ll connect with the rest of the series, and her musings on the success of Folk of the Air.

Cosmo: I obviously have to ask: How old is Oak when we see him in The Stolen Heir? At the end of Queen of Nothing, he’s 8. So how much time has passed?

Well, he’s 17. I think it’s really fun to get to time skip because we do then wonder about a lot of things. What’s happened? What decisions were made? Taryn’s kid is about the same age he was when all this stuff happened. I thought a lot about what that would be like for him to see a little kid and think, Oh, that was me. That’s how old I was and here’s the choices people made to protect me. And what choices can I make? Because a year later, nothing’s different. Now that we’re actually moving forward in time, it’s enough for them to have made a bunch of interesting choices.

A lot changes in nine years. Where do we find Oak now and what specifically made you want to focus the story on him?

I think Oak is really interesting to me because he, on the face of it, has a great life. He’s the heir to Elfhame. He has like a million sisters who all love him. He has parents who love him. But he also has been the center of a massive conflict for much of his childhood. Including, before he was born, being cut from the belly of his poisoned mother. So he has these really, distinctly different ways of looking at his past. I think that was really interesting to me. He would seem just really happy go lucky and kind of spoiled, but underneath, there’s a lot of other stuff and we don’t know what’s happened to him since we saw him last.

What about Suren? Last we saw her, she was named queen of the Court of Teeth by Jude and Carden, but then the court also no longer exists.

Suren, our changeling queen, was raised in the human world before she was stolen away by the Court of Teeth. But she’s returned and has been living in the woods on the outskirts of the town where she was raised. She’s kind of feeling like she was too strange and too broken to go back to her human life but also not really having any desire to live a faerie life. She’s been undoing the spells of faeries in the local area where they try to bind humans into things. She’s trying to sort of get by when Oak comes and recruits her to go on a quest. They have to stop her mother, who terrorized her, from waking an ancient power before it’s too late. But Oak has been keeping secrets, and everything isn’t the way he’s presenting it.

Unlike Folk of the Air, which was a trilogy with some novellas in between, this is a duology. Was there a reason behind that?

So the books, The Stolen Heir and its sequel, are two different points of view.

Are both books sharing the same story?

Yeah, the first one is from Suren’s point of view. I have so much to say about Oak because we know him so well. But that is also why we’re starting at her point of view.

How has it been like switching between these two characters and finding out the reasoning behind their decisions?

Well, I haven’t written the second one. But I think it’s really, really fun to sort of think about how in the second book, we’re going to get to see the first book differently. One of the things we don’t really know is what’s been going on back in Elfhame because Suren doesn’t know. She only knows what she saw. So I think crashing into Oak’s book, it’s like the whole world will get bigger in a way.

What made you want to go this route?

I knew there was going to be a lot of secrets and I thought this would be an interesting way to get at them. In the first book, you don’t know everything he knows. And then in the second book, we know more than we thought we were gonna find out.

When I was a kid, I definitely cut my teeth on Interview With the Vampire, by Anne Rice, and that moment of going into Lestat’s point of view in The Vampire Lestat and realizing we didn’t know so much and we didn’t see the larger story was such a delightful moment that I thought, I would like to try to and capture some of it.

Are you considering this part of Folk of the Air? Or is it something else entirely?

I’m calling it a Book of Elfhame, because I do not think it’s part of Folk of the Air. I want to indicate that this is a little bit different. We’re gonna find out stuff that’s happened in the time when we saw Oak last and now, but it’s not a direct sequel and we’re not in Jude’s head. It’s very close to those books in terms of where we are in the world and who we’re interacting with. It’s not like moving on to a totally different court in a totally different place, but it’s also a little different.

I have been a fan since Tithe, which originally came out 2002, but a lot of people have originally discovered your books through Folk of the Air. Does it still surprise you when people tell you that they just found your stuff?

It’s very surprising. I remember when I sat down to write I thought, Well, I’m really interested in doing this. But who would ever like Carden? He’s awful. No one will be with me. They’re gonna be like, Why is this guy so terrible? Or, Why does he have a tail? Don’t ask me about the second one.

There’s been a lot of buzz for the series, particularly thanks to BookTok. How do you feel seeing a community out there who feels like they know these characters as much as you do?

They bring up some excellent jokes about them, and it does to like they know them. The BookTok component is fascinating because it happened completely without me. I’ve posted twice to BookTok once being like, Thank you very much for reading my book and another time talking about Book of Night while my hairless cat was up to my throat. And it’s just really, really delightful, because it’s so separate and has nothing to do with me. It’s just a bunch of people talking to each other about the books.

Knowing there’s such a big fan base behind it, did it feel like there was any added pressure when writing this new series?

I try really hard to put it in the back of my mind because Folk of the Air came out of wanting to do something weird. People do really respond to the fun, weird stuff that we think we only like, so it’s really important to let ourselves do that and try not try to figure out what other people want or think, Well, I think they’d like this. So let me put it in. But it’s hard not to wonder things like, Does this have some of the same pleasures? I do think about it, but I tried not to.

What are three words you would use to describe The Stolen Heir?

Alright, so: feral, spoiled, and decoy.

Anything you want to say to the fans as they get ready for this new series?

I think that one of the things that stuck with me from just having been on tour is getting to meet so many people who read the books and stuck with me. There’s so much about the stuff that I love and I wasn’t sure anyone else would love it. It just means so much to me to know that they reach people and that they meant something to them, so thank you.

The Stolen Heir, by Holly Black, will be released on January 3, 2023. To preorder the book, click on the retailer of your choice: