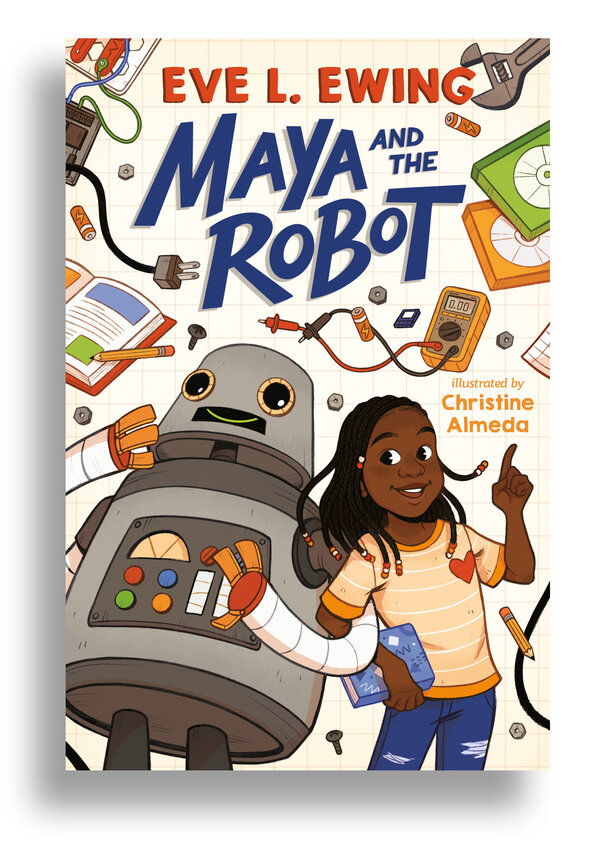 MAYA AND THE ROBOT
By Eve L. Ewing
Illustrated by Christine Almeda

Diversity (or, more accurately, the lack of it) has long been a Very Big Problem in technology and science. Google and other Silicon Valley giants, for example, have disclosed that their work forces are dominated by white men. And the companies point to a “pipeline” issue — not enough Black and Latino children getting into tech and science in the first place whom they can later recruit. Now here comes a book that tackles this “pipeline” issue head-on.

“Maya and the Robot,” a delightful tale by Eve L. Ewing, champions young people’s interest in technology and the world of science fairs. The heroine is Maya, a shy brainiac who is Black and a fifth grader. The novel takes us through Maya’s first-day-of-school jitters and swiftly sets up a story line where she finds, fixes and amazes everyone with an artificially intelligent robot named Ralph.

Along the way, Maya explores popular tech tools and trends. Emailing with a renowned robotics professor at Stanford? Check. Learning about different types of batteries? Check. Finding out about a flavor of A.I. known as “natural language processing”? Check. The book even weaves a glossary of robotics terms — actuators, anyone? — into the story. Animated by Christine Almeda’s engaging illustrations, it all makes tech and science seem cool, fun and accessible. And the message, to me at least, is clear: Young readers, don’t be daunted by technology and science. Everyone can get into these subjects.

This message makes sense given Ewing’s background. As an assistant professor at the University of Chicago, she has focused on how social inequality and racism affect public schools and young people. Ewing, who is Black, also wrote “Ironheart” for Marvel Comics, featuring a superhero who is a Black girl genius.

The beating heart of “Maya and the Robot” is Ralph. A once-neglected project stowed away in a dusty store closet, the robot bursts to life with an unmistakable personality, smiling through his LED screen and even knowing how to hug people. Ralph, we learn, is part of a mission by his creator “to heal the world, to use technology to make the world a kinder place.”

Ralph leads Maya into a subplot that grapples with the sad consequences of gun violence. He helps her see some of her classmates in a new light and forge stronger connections with her neighbors, friends and teachers, ultimately deepening her understanding of human relationships.

I couldn’t help wondering what children might think of this novel, since they’re its target audience. So I asked my kids, ages 13 and 17, to read “Maya and the Robot,” too. My 17-year-old, who declared that she was too mature to read the book but did so anyway, immediately came to the same conclusion I did about how the portrayal of the intelligent and gutsy Maya would empower girls to get interested in STEM.

My 13-year-old had a different take, maybe because he finds it unsurprising for kids to be steeped in tech projects and science fairs, which have increasingly crept into school curriculums. Reflecting on Maya’s interactions with Ralph, he said the book is about friendship and how friends have each other’s back. Which, in the end, is a much more universal message.