After winning back-to-back Pulitzers, the author of “The Underground Railroad” and “The Nickel Boys” took another detour with his new crime novel, “Harlem Shuffle.”

New York City is “always being laid low,” Colson Whitehead said. “By 9/11, by Covid, and we bounce back.”Credit…Jasmine Clarke for The New York Times

It was an overcast morning in August, and we were walking along 125th Street in Manhattan, where his new novel, “Harlem Shuffle,” is set. He was describing the challenges of plotting a scene where criminals break into the safe deposit boxes at the Hotel Theresa, an elegant mecca for Black celebrities, athletes and artists in the 1960s, and make off with piles of jewelry.

“It’s nerve-racking, like a real heist,” Whitehead said. “You have to plan it, and then, does it work? What are the holes in the scheme?”

“Harlem Shuffle,” which Doubleday will release on Tuesday, is his 10th book and his first crime novel, and perhaps the most surprising thing is that it took him this long to write one. Its hero is Ray Carney, a furniture salesman who dreams of ascending to Harlem’s upper middle class and plays the role of a “fence,” selling stolen items for his delinquent cousin Freddy and other unsavory associates. Carney is in denial about serving as a middleman between the criminal and straight realms, but after Freddy ropes him into the jewelry theft, he becomes the architect of more ambitious schemes targeting some of the most powerful people in New York City. 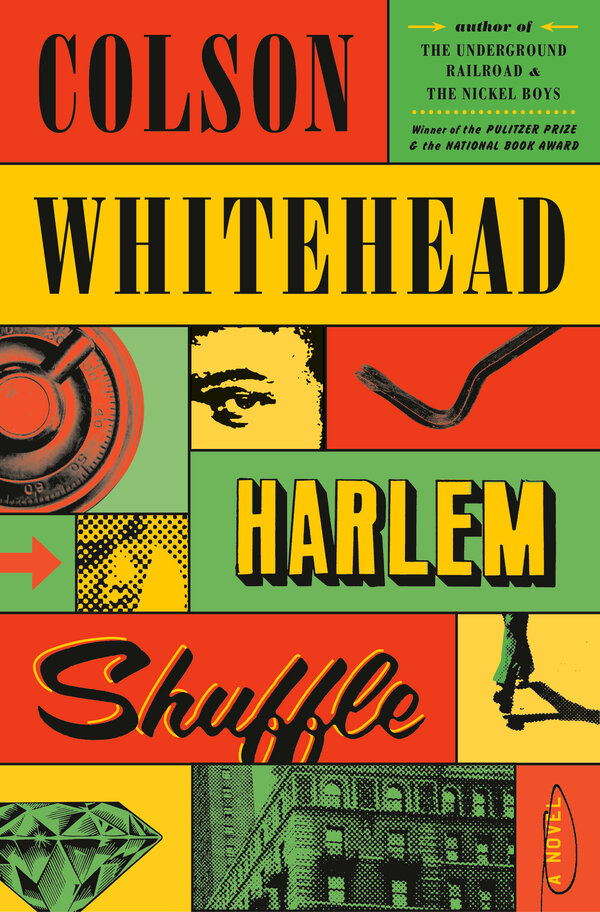 Whitehead stopped at the corner of Morningside Avenue, the location of Carney’s shop in the novel. (“This used to be a fried chicken joint,” he said, pointing out the M&G Diner sign still hanging above what is now a men’s clothing boutique.) When Carney expands his store, he adds a second entrance that goes directly to his office, where he receives his felonious clients. The separate doors, a physical manifestation of Carney’s double life, play into Whitehead’s portrait of New York as a city teeming with side hustles, with laundromats and delis serving as fronts for illicit operations.

Whitehead stared at an innocuous locked metal door on the sidewalk. “What’s under that basement grate? Who knows?” he said.

In person, Whitehead, 51, is friendly and self-deprecating, with a disarming, high-pitched laugh. He comments on obscure social media accounts like @ElevatorWorld (“Yes! The new steel bi-parting doors are out! #summerofhedonism,” he tweeted) and responds to fans with glib nihilism. (When a reader gushed over his 2014 poker memoir “The Noble Hustle” and asked, “What now?” Whitehead replied, “Life continues — empty, bleak, and seemingly without purpose.”)

For all his ironic swagger, more than 20 years after publishing his debut, he still sometimes feels like a novice. “It doesn’t get easier or harder,” he said of writing. “It’s just always kind of terrible.”

Throughout his career, Whitehead has shown a protean ability to shift into new genres, writing a speculative mystery about an elevator inspector (“The Intuitionist”), a postmodernist satire about a nomenclature consultant (“Apex Hides the Hurt”), an autobiographical coming-of-age story (“Sag Harbor”) and a post-apocalyptic zombie tale (“Zone One”), among others.

He followed those novels with “The Underground Railroad,” about a young enslaved woman who escapes from a Georgia plantation, which injected a slightly steampunk, sci-fi aesthetic into an intricately researched historical narrative. With its release, Whitehead, accustomed to his niche as a quirky writer with eclectic preoccupations, suddenly became a literary icon. The novel, which has sold more than 1.8 million copies, was selected by Oprah Winfrey for her book club and adapted into a television series by the Oscar-winning filmmaker Barry Jenkins, and won the National Book Award, the Pulitzer Prize and the Arthur C. Clarke Award for best science fiction novel.

For many writers, it would have been a career-defining work. But three years later, Whitehead came out with “The Nickel Boys,” about two Black boys at a Jim Crow-era Florida reform school. He won another Pulitzer, becoming the first novelist to win for consecutive books.

His heterogeneous style comes not so much from an effort to show his range but from a short attention span. “It prevents me from getting bored — that’s the main thing,” he said. “Like, why can’t I just do a zombie novel? No reason, just do it. So, with this, can I do a heist novel? Yeah, sure. Why not?”

The plot he devised for “Harlem Shuffle” offered a new, high-geared narrative engine to play with, but it also gave him a way to explore ideas about the slippery nature of morality, power (and who holds it), and the social hierarchies of criminal subcultures.

“What Colson does with the heist genre, he hits all the marks, the dialogue is fabulous, but as you get further into the story, you begin to realize the depths of what he’s up to,” said Bill Thomas, editor in chief and publisher of Doubleday. “You begin to see he using the tropes of the crime genre to tell a much larger and deeper story.”

“Harlem Shuffle” is a more personal book than his recent ones, Whitehead said, allowing him to reveal more of his caustic humor and misanthropic side. After he turned in the manuscript, he immediately started writing a sequel that follows Carney and his criminal cohort into the 1970s (“very dirty, that sort of bankrupt New York time,” he said). It’s the first time that Whitehead, who constantly reinvents himself, has wanted to continue with a story.

“After the darkness of the last two books, the levity, Carney’s humble charm, is fulfilling a psychological need for me,” he said. “I could explore the world in a different way, that’s not tied to these terrible systems of capitalism and institutional racism.”

Still, in writing about Harlem in the 1960s, Whitehead found himself returning to themes that have long preoccupied him: racial injustice, class disparities, entrenched power structures that allow the ruling class to exploit the vulnerable. The final caper in the novel occurs shortly after the Harlem riots of 1964, which broke out after a 15-year-old Black student named James Powell was fatally shot by a white police officer. Whitehead had just finished writing it when protests erupted across the United States in response to the killing of George Floyd.

“It was very strange,” he said. “I picked the week after the Harlem riot because I didn’t want to exploit the incident. And then, there we were again.”

Whitehead first had the idea for a Harlem crime novel seven years ago, but he set it aside to write “The Nickel Boys.” A devotee of heist movies like “Dog Day Afternoon,” “Asphalt Jungle” “Charley Varrick,” “The Taking of Pelham 123” and “The Outfit,” he wanted to write a crime novel from the perspective of fences, henchmen and other low-ranking crooks and hustlers.

“Maybe I’m being presumptuous, but I think everyone has their criminal side that can come out and be expressed, or is expressed in tiny ways. Maybe you, you know, steal a pack of gum,” he said. “It doesn’t involve dumping bodies and stuff like that, usually.”

Whitehead steeped himself in novels by Chester Himes, Patricia Highsmith and Richard Stark, one of Donald Westlake’s pen names. He read a memoir by Mayme Hatcher Johnson, the wife of the Harlem crime boss Bumpy Johnson, which proved to be a trove of tips on criminal enterprises. He pored over newspaper ads from the period to learn the price of a hat or a cup of coffee, and studied different models of safes (“Aitkens took three or four good whacks before there was enough purchase for a crowbar” while Drummond “required six to eight whacks,” he writes).

He was deep into writing when he realized he had an untapped resource — his parents, who lived in Harlem in the 1960s, and raised him and his siblings around Midtown and Upper Manhattan. He learned that his father used to work summers at Blumstein’s, an upscale department store where Carney gets his first job selling furniture, and that his father frequented the Chock Full o’Nuts next to the Hotel Theresa, where Carney goes for coffee and plies the waitress for gossip and information.

Walking past the Theresa Towers, the office building that replaced the hotel, Whitehead paused and pointed out the sign that still says Hotel Theresa, which was known as “the Waldorf of Harlem” where high profile people like Malcolm X, Louis Armstrong, Josephine Baker, Richard Wright and Duke Ellington once stayed. We walked over to Mount Morris Park, where Carney dumps the body of a gangster, rolled up in a Moroccan rug, and wonders why there aren’t more lying around (“From the way the newspapers wrote about the park, he thought there might be a line”).

Born and raised in New York, Whitehead, who lives on the Upper West Side, writes and talks about the city with a native’s mix of affection and exasperation, marveling at its endless contradictions — the grotesque wealth and grinding poverty, the ambition and dereliction, the striving and corruption, the loneliness and misanthropy, the glamour and grime. He finished writing “Harlem Shuffle” during the first few months of the pandemic, when much of the city felt abandoned and hollowed out, silent except for the sirens.

“So the city’s laid low. Everything’s crummy. And then the artists find their muse in the wreckage,” he continued. “If you read the history of New York City in general, there’s fires, there’s yellow plague, wars with Native Americans, wars with the British. City’s on fire. And then it comes back. Then we rebuild. And that vitality, to me, is very lovely to think about.”