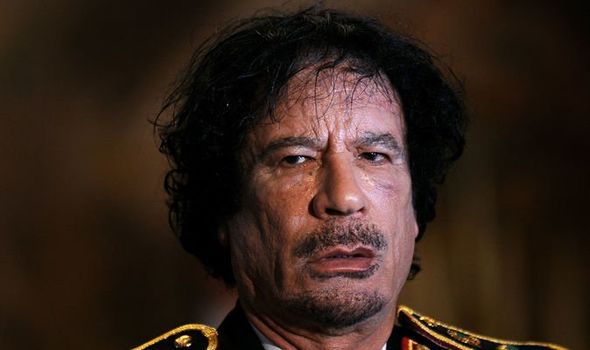 How can one love a genocidal dictator who bombed and starved his own people, who kidnapped, raped, tortured and murdered women, supported international terrorism ‑ including the Lockerbie bombing ‑ and sent assassination squads to kill dissidents overseas?

Daad Sharab knows the answer. For more than two decades she was Libyan strongman Colonel Muammar Gaddafi’s closest confidante and adviser, and was rumoured to be his lover, which she denies. US President Ronald Reagan branded him “the mad dog of the Middle East”, but to Sharab he was a trusted mentor.

“I loved him as a friend and a father-figure,” says Sharab, “In all those years I heard the rumours, but I never saw him abuse anyone.”

Although, now that she thinks about it, there was that time that six women were brought to Gaddafi and paraded before him so he could choose among them.

And that time a visiting dignitary’s wife broke down and sobbed, claiming the dictator had raped her.

“She was lying,” says Sharab. “Women threw themselves at Gaddafi.”

And, of course, even two decades as his “friend” didn’t stop the tyrant she loved turning on Sharab, having her imprisoned ‑ “a virtual death sentence,” she admits. She only escaped in the confusion around a NATO bombing raid that almost killed her.

Wednesday marks the 10th anniversary of the day an angry Libyan mob dragged their hated dictator from the storm drain where he was hiding and beat, stabbed and shot him to death.

But all these years later, Sharab is keen to defend him. “Gaddafi wasn’t a monster,” she insists. “He was a revolutionary who was widely misunderstood by theWest.”

Her extraordinary alliance is detailed in her new memoir, The Colonel And I, published on Monday, revealing insights into the corruption, lies and back-stabbing within Gaddafi’s regime.

It’s hard to imagine that she was ignorant of the murderous reputation of the Libyan Colonel who took command of the North African nation in a military coup in 1969.

Libya sponsored terrorism worldwide, including the Lockerbie jet bombing that killed 270 people, 43 of them British, supplied Semtex for the IRA’s atrocities in Britain, bombed a Berlin nightclub and was suspected by the CIA of launching a nuclear weapons programme.

Sharab first met Gaddafi at an international conference on women’s rights in Libya where, impressed by her aggressive questioning, he offered her a job as his business adviser, investing Libyan millions in Western corporations.

“Women were treated like second-class citizens in much of the Gulf, but Gaddafi was willing to have a woman as his business consultant, which says a lot,” she says. “He never looked down on women.”

Indeed, the dictator’s elite bodyguard squad were an all-female team of Amazons, famously celibate ‑ except with Gaddafi.

“They weren’t allowed to marry, but several of them were Gaddafi’s lovers,” admits divorcée Sharab.

“Some people simply assumed that I must be one of Gaddafi’s mistresses, but I never was, and he never made any sexual advances to me.

“I worked with Gaddafi for 22 years. If I’d been his lover, even if I looked like Brooke Shields, I wouldn’t have lasted more than two years. His lovers came and went, but we remained friends.”

She was bowled over by her first meeting with the Libyan strongman.

“He was tall and handsome in a flowing robe, charismatic and intelligent, with an aura about him which was almost religious,” she says, recalling the young Colonel as “beyond my wildest dreams.”

Sharab travelled the globe investing Libyan money in deals with such dubious figures as UK-based Saudi arms dealer Adnan Khashoggi and British entrepreneur Tiny Rowland, who had been branded by Prime Minister Edward Heath as “the unacceptable face of capitalism”.

But she was also sent on diplomatic missions to comfort Libyan terrorists in foreign jails: she met admitted killers and even convicted Lockerbie bomber Abdelbaset al-Megrahi at Barlinnie jail in Scotland. “I never doubted his innocence,” says Sharab. “He was framed.”

Sharab earned more than $1million a year brokering deals for Gaddafi, but her growing influence over the dictator won her enemies.

“Libya’s intelligence service didn’t trust me because I was a Jordanian and too close to Gaddafi,” she explains.

“I also discovered that the intelligence service had taken a fortune that Gaddafi intended for the legal defence of Libyans accused of terrorism, and had kept it to line their own pockets.

“The intelligence service would have had me killed long ago if Gaddafi hadn’t been protecting me.”

In his later years Gaddafi showed signs of mental illness, but Sharab insists: “He was just depressed, and bitter that his Arab revolution against theWest had failed.”

When he skipped a promised appearance at her brother’s wedding, Sharab snubbed the dictator for six months ‑ “enough time for the intelligence service to poison Gaddafi’s mind against me,” she says.

He was notorious for turning on loved ones. “He imprisoned his own sons to try to bring them under control, after their fights in nightclubs, drinking, mistreatment of domestic staff and drug-taking,” she reveals.

“For over two decades he treated me like a favourite daughter but then he turned on me.”

Sharab was arrested and held in the Tripoli prison compound that previously housed Gaddafi’s sons.

For 19 months she languished in a small villa and, though it was hardly a squalid prison cell, she sunk into depression, fearing an executioner’s bullet at any moment.

“I was scared,” she admits. “It would be so easy for Gaddafi to just have me disappear.”

She miraculously escaped amid the Arab Spring uprising of 2011 as Libyans revolted against Gaddafi’s regime. While he bombed his own people, NATO joined the rebels bidding to oust him.

“NATO bombs fell on Tripoli and around my prison compound for days,” Sharab recalls. “I was terrified. Then one night a bomb hit the compound, and I was buried in rubble. I was only saved by two huge masonry slabs that formed a space over me.”

Staggering from the ruins she fled into the streets, afraid for her life.

A kind-hearted rebel ultimately helped her escape to safety in Tunisia, then return to Jordan where she now works as a business consultant in the Gulf.

Days after her escape Gaddafi was fighting for his own life. His convoy was bombed by NATO and in the ensuing firefight he took cover in a villa.

When that was shelled, Gaddafi fled to hide in drainage pipes, where he was captured and beaten to death by a mob, finally ending his 42-year reign.

“No matter what he’d done to me, I did not want it to end like this,” says Sharab. “I wanted to see Gaddafi put on trial, in a civilised way.”

Hanging on the wall of her office in Amman, Jordan, are photos of Sharab with dignitaries she met during her travels for Gaddafi, including President George Bush Senior, Hillary Clinton and former Israeli prime minister Shimon Peres. But pride of place goes to a photo of Sharab alongside Gaddafi.

“I didn’t cry when he died,” she says. “But Libya is worse off without him. Gaddafi improved healthcare, education and women’s rights, built roads and kept the streets safe. He brought stability. Now it’s not safe to go out at night there.

“I’m not saying he was an angel but he was no devil either. He was just misunderstood.”

The Colonel And I: My Life With Gaddafi, by Daad Sharab. Published by Pen & Sword Military, it costs £25 and is available from Monday.