Books That Changed Me: Benjamin Gilmour

Benjamin Gilmour, author and film director, has been a paramedic for 20 years. His last film, Jirga, was Australia’s submission for Best Foreign Language Film Oscar, 2019. He is the author of Paramedico, Warrior Poets and, most recently, The Gap (Viking). 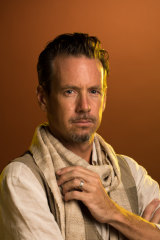 Benjamin Gilmour aspires to be a Renaissance man like the Victorian explorer, Sir Richard Burton.Credit:Janie Barrett

Mark Twain’s Adventures of Huckleberry Finn may have inspired me to build by own raft and drift down the Lane Cove River in 1994, but Heyerdahl’s Kon-Tiki expedition made me realise the impossible was possible. The Norwegian suspected the South Sea Islands had been settled by pre-Columbian sailors on rafts, so he built one in 1947 and set-sail to prove it. Whenever people try talking me out of hair-brained ideas I always think of Kon-Tiki.

Lorca was Spain’s greatest poet of the early 20th century. At 21 I was obsessed with his work. It was passionate, surreal and mesmerising. His metaphors were a unique language I understood. Poet in New York was written when Lorca was deeply depressed. He travelled to New York for studies, but found himself wandering the city observing the poverty and racism and shadows. And he channelled his depression into the dark beauty of his poetry.

The Devil Drives: A Life of Sir Richard Burton
Fawn M. Brodie
Without a doubt the best biography of Burton, a man I’ve always aspired to be like. He was an explorer, ethnologist, archaeologist, orientalist, poet, translator, botanist, swordsman and amateur physician (which is what some of us paramedics think we are). He was also a brilliant raconteur, and spoke 24 languages. This came in handy for many adventures, such as his journey to Mecca and Medina in 1853, disguised as a dervish. Burton was the definition of a Renaissance man.

Marketing the Mystic East is the subtitle of Karma Cola, which I read while motorbiking through Rajasthan with my girlfriend (now wife) Kaspia in 2001. Mehta’s observations of Western travellers arriving in India in search of eastern enlightenment during the sixties is cutting. Her critique of the commodification of spirituality kept us in check. If I still had a copy I’d lend it to some of our neighbours in the Byron hinterland where we live.