Why would an allegedly sane writer want to attempt to pay tribute to the entire life of a beloved artist in a short 1,000- to 2,000-word picture book? Why would a purportedly sensible illustrator want her work to be compared with the entire output of an acknowledged genius? Are the people responsible for creating these five books sane and sensible? Let’s find out, shall we? 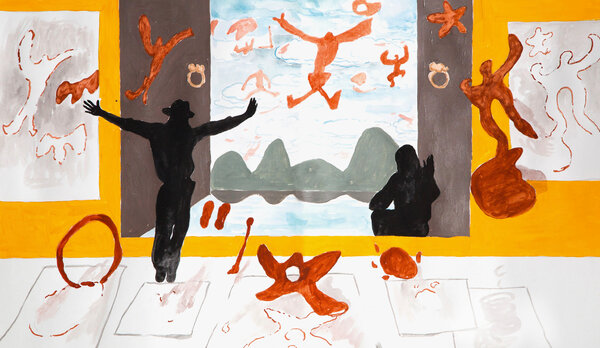 FLYING PAINTINGS: The Zhou Brothers: A Story of Revolution and Art (Candlewick Press, 48 pp., $17.99; ages 5 to 9) takes us all the way from Wuming, China, during the Cultural Revolution, to the South Side of Chicago during Reaganomics; from childhood to adulthood, and from obscurity to world renown, in the lives of the Zhou brothers, DaHuang and ShanZuo, celebrated contemporary artists who have worked collaboratively since 1973.

Their body of work includes large-scale paintings on canvas that are the result of a process not unlike a dance performance, and sculptural work ranging from small maquettes to large installations. The title of the book is based on childhood stories told by their grandmother of paintings that flew through the air and landed on mountain cliffs.

The skillful pacing and careful choice of words in this book will appeal to children in the same way that a soul-stirring melody sung by a loving parent can bring a baby to tears. And yet the writing is not sentimental in the least. Cherished relatives are dispatched from this world with economy: “Four years passed. Beloved Po Po died.”

A refrain that marks each milestone in the brothers’ lives is the matter-of-fact observation that the world, and just about everything in it, is both “beautiful and terrible” at the same time.

There is no attempt in this book, whose illustrations were painted by the Zhous themselves, to paper over how difficult it has been for the siblings to work shoulder to shoulder over the decades. “How dare you destroy my work?” one says to the other during a confrontation.

At its core, the book is about staring down adversity with passion and humility. We are reminded that though the act of weathering life’s many ups and downs is difficult, it is mostly worth the trouble.

Marietta Barovier broke through the (Venetian) glass ceiling during the 15th century with the design of the rosetta bead, a widely admired blossom of glass made by cutting segments from long ropes of layered glass. Her father was a master glassmaker on the island of Murano, where the family lived, and her brothers helped him in the workshop.

At the time, glassmaking was considered the exclusive domain of men, but Marietta was desperate to learn. Taunted and chased away by her brothers, she took the heat and returned every day until her father finally relented.

For a story that begins with the sentence “Marietta loved to watch the sun,” A THOUSAND GLASS FLOWERS: Marietta Barovier and the Invention of the Rosetta Bead (Atheneum Books for Young Readers, 48 pp., $17.99; ages 4 to 8) is a fanciful, if not blindingly brilliant, tale of Marietta’s culture and exploits. By contrast, Evan Turk’s illustrations are brilliant. Though books are only ink on paper, this art manages to conjure the heat of the furnace and the ethereal delicacy of Murano glass.

Lotte Reiniger was a pioneer in the fields of film and animation technology. She invented the multiplane camera in 1923 and used it to create one of the first feature-length animated films in 1926. Using silhouette animation, “The Adventures of Prince Achmed” is a lovingly crafted masterwork of avant-garde art that has stood the test of time. Most cinephiles agree that Disney owes Reiniger a debt of gratitude.

Told in rhyming verse, LOTTE’S MAGICAL PAPER PUPPETS: The Woman Behind the First Animated Feature Film (Page Street Kids, 40 pp., $18.99; ages 7 to 10) traces the main events and artistic achievements in Reiniger’s life. Having focused her talents on silhouette paper cutting since 2008, the greeting card entrepreneur and illustrator Kathryn Carr was a perfect choice for this book. She manages to walk the difficult high-wire act of honoring Reiniger’s oeuvre while remaining true to her own work. On the other hand, choosing to tackle the biography of a life well lived in rhyming verse is more of a self-imposed walk on the wire. And despite a few stumbles — according to my tin ear — Brooke Hartman sort of pulls it off.

MODERN ART EXPLORER: Discover the Stories Behind Artworks by Matisse, Kahlo and More (Thames & Hudson, 96 pp., $19.95; ages 9 to 12) achieves a different type of feat: pulling together an overview of the Centre Pompidou’s vast collection of more than a century of modern art, made between the 1860s and the late 1960s, for an audience of children and adults.

Without doubt, it is a very good thing that there are bright lights out there like Alice Harman, the book’s inventive writer (“Can you believe it? Someone’s dumped a pile of junk in the middle of this art gallery. Unbelievable. Excuse me, security, can we get this removed?”), and Serge Bloch, the book’s veteran illustrator, known across the globe for transforming a fried egg into a nose (or was it the other way around?), who here replaces Duchamp’s “Chocolate Grinder” with a common meat grinder. The gendarmerie have been notified!

DRAWING ON WALLS: A Story of Keith Haring (Enchanted Lion, 64 pp., $18.95; ages 6 to 14) is a tender and beautifully written biography of Haring’s short life. Matthew Burgess, the book’s talented writer, set out to tell Haring’s tale without embellishment, sugarcoating or regret. The result is a joyful celebration of Haring’s world.

In finding a way to address the artist’s homosexuality and AIDS diagnosis, Burgess took inspiration from comments Haring made in an interview some 30 years ago with Rolling Stone about the pitfalls of not being honest: “It gives so much fuel to the people who are telling you that it’s wrong to be who you are. There are so few people who are good openly gay role models or just good people who are respected who are open about their sexuality. Now there has to be openness about all these issues.”

Josh Cochran, the book’s illustrator, who pays tribute to Haring in his own unique style, was similarly inspired by a mural of Haring’s he walked by almost every day while in design school: “The casual fat lines crisscrossing, the vivid washes of color, even the accidental drips are simultaneously effortless and brilliant. … Drawing as stream-of-consciousness poetry is something that I absorbed in large part from Keith.”

So, did this investigation answer the opening question? Are the people responsible for creating these five books sane and sensible?

What a silly question: There is no such thing as a sane writer or a sensible artist. And we simply couldn’t get along without them.

Frank Viva, an award-winning author/illustrator whose picture book “Young Frank, Architect” was the first book ever created for the Museum of Modern Art’s publications department, is currently working on a picture book about a trip to Tate Modern.