As the Georgia Runoffs Arrive, a New Book Says the Senate Is Broken 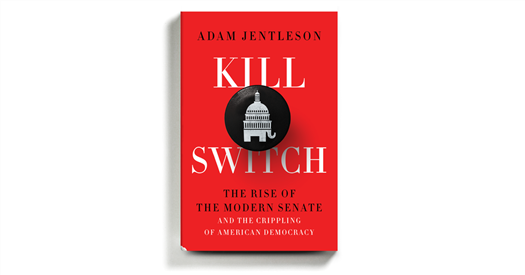 According to lore, George Washington came up with the metaphor of the Senate as a “cooling saucer,” tempering the House’s blazing hot cup of tea. It’s an apocryphal story, but an evocative one nonetheless, casting the Senate as a fail-safe institution whose work is invariably carried out with wisdom and patience.

More typically, though, the Senate is deployed as a blunt-force weapon — that, at least, has been the argument from a growing chorus of Democrats preparing for the Georgia runoffs on Tuesday.

Now Adam Jentleson, who served as a senior aide to the former Senate majority leader Harry Reid, has written an impeccably timed book about the modern Senate using a very different metaphor. In “Kill Switch,” Jentleson explains how “the world’s greatest deliberative body” has come to carry out its work without much greatness or even deliberation, serving instead as a place where ambitious legislation goes to die.

There is, of course, the structural imbalance baked into the institution itself: Electing two senators per state, regardless of population, has meant that Republican senators since 2000 have only ever represented a minority of Americans — even when Republicans have controlled a majority of the seats. But Jentleson says that it’s ultimately the filibuster that has endowed those Republican senators with formidable powers of obstruction. “The filibuster,” he writes, “has mainly served to empower a minority of predominantly white conservatives to override our democratic system when they found themselves outnumbered.”

Jentleson is explicitly a partisan in this fight, and in “Kill Switch” he doesn’t pretend to distance himself from the action to give the view from 10,000 feet. But his intimacy with the Senate turns out to be his book’s greatest strength. Jentleson understands the inner workings of the institution, down to the most granular details, showing precisely how arcane procedural rules can be leveraged to dramatic effect.

The book is divided into two parts: The first traces the rise of the filibuster in the 19th century and its use in the early 20th century, particularly in maintaining Jim Crow; the second follows the fate of the filibuster after President Lyndon Johnson signed the Civil Rights Act of 1964.

Republicans eager to preserve the filibuster have talked about it with such reverence that it’s easy to forget it only appeared after all of the Constitution’s framers had died. Long-held norms against “superfluous debate” meant that even after the Senate got rid of a rule that limited debate in 1806, it was several decades before John C. Calhoun deigned to wield extended speechifying as a political tool, making high-minded appeals to the principle of minority rights.

Not just any minority, though. “Calhoun deployed his concern for the underdog only to help the overdog,” Jentleson writes. The South Carolina senator’s soaring rhetoric about minority rights revolved around protecting the interests of wealthy slavers in the South and their vision of white supremacy. It’s not for nothing that the historian Richard Hofstadter called Calhoun “the Marx of the Master Class.”

Jentleson ably narrates this history, with all of its ironies and unintended consequences. In 1917, the Senate introduced Rule 22, allowing senators to call a vote for cloture — to end debate — but only if they could muster a supermajority of two-thirds (a threshold that has since been lowered to three-fifths, or 60 senators). The supermajority threshold was the result of a compromise in the Senate — “a reasonable thing to do at a time when Senate norms still compelled minorities to eventually yield to the majority,” Jentleson writes. But as this norm degraded over the ensuing decades, Rule 22 placed the onus on supporters of a bill to whip up not just a majority but a supermajority in order to end debate and get to a vote. What started out as an attempt to reform the filibuster and erode its power perversely became a facilitator of it.

“In the 87 years between the end of Reconstruction and 1964,” Jentleson writes, “the only bills that were stopped by filibusters were civil rights bills.” No other issue seemed to motivate obstructionists in quite the same way. The story after the Civil Rights Act of 1964 has been different, Jentleson says, but no less detrimental to progressive causes. The modern Senate has become so efficient (in one sense of the word) and the filibuster so streamlined that senators seeking to block or delay legislation don’t have to bother with an actual speech; they can silently filibuster a bill, and as if that weren’t enough of an oxymoron, there’s even a “hotline” to do it.

“All you have to do is call the cloakroom, tell them the senator you work for intends to place a hold on the bill, and the bill is filibustered,” Jentleson writes. “One phone call, one objection, and the threshold on any bill or nomination goes from a majority to a supermajority.”

Jentleson slowly builds his case, biding his time so that when he arrives at Reid’s decision to “go nuclear” in November 2013 — eliminating the filibuster for White House nominees, save those to the Supreme Court — Reid’s actions seem all but inevitable. Under the leadership of Mitch McConnell, Senate Republicans tried to block President Obama’s nominees “with unprecedented frequency,” Jentleson writes, and he offers the numbers to prove it. “All other presidents combined had endured a total of 82 filibusters against their nominees. But from 2009 to 2013, President Obama alone faced 86.”

In “Kill Switch,” McConnell is expressly portrayed as a 21st-century version of Calhoun — infinitely blander, less extravagantly fanatical but more coldly efficient. One gets the sense that McConnell wouldn’t necessarily disagree with Jentleson’s assessment of how the Senate fundamentally operates; it’s just that he and his fellow Republicans find the filibuster useful to a conservative agenda, which generally has more to do with stopping legislation than advancing it. At the time of writing, McConnell has halted an effort to vote on $2,000 stimulus checks at the end of the pandemic year, bundling it with things that President Trump wants and Democrats decidedly don’t. Whether you call it a poison pill or a kill switch, the effect is the same.