Are we ready for a pandemic novel? Gary Shteyngart, the author of “Our Country Friends,” thinks so. 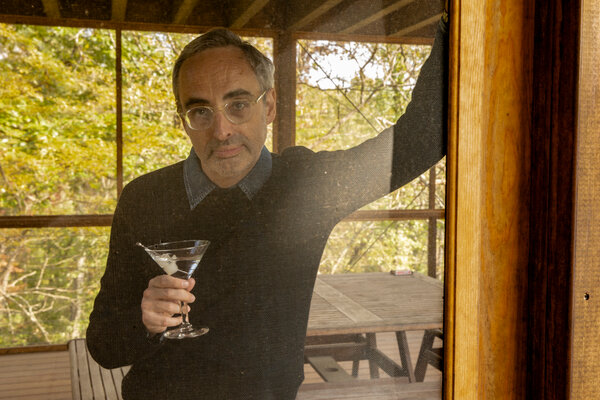 “The dystopia is now,” Gary Shteyngart said in an urgent tone, a few decibels shy of a yelp.

We were sitting in Union Square on an unseasonably warm October morning, as people around us walked dogs, pushed strollers and scrolled through their phones in the post-apocalyptic sunlight. Everything looked and felt weirdly normal.

Not long ago, a man ranting in a public square about global collapse might have seemed like a messianic crank. But given the state of things — as we linger in the nebulous middle-of-the-end or end-of-the-middle of the pandemic — who could disagree? The dystopia is now.

Shteyngart has often conjured up blistering satirical visions of the world, in novels like “Absurdistan,” about an obese, lovesick Russian oligarch who becomes a minister in a post-Soviet republic called Absurdsvanϊ, and “Super Sad True Love Story,” a black comedy set in a futuristic America where everyone carries digital devices and livestreams their thoughts, hotness ratings and credit scores.

But now, dystopia has caught up to him, and he’s had to recalibrate. Last year, he was 240 pages into a new dystopian comedy — about a futuristic Manhattan where New York University has seized control of half the city — when the first wave of coronavirus infections hit New York. Compared with his arch sendup of academia, “I thought, this might be worse,” he said.

Like many other New Yorkers, Shteyngart fled, winding up at his country house in Dutchess County. He dropped the book he was writing and started a new novel, about a group of old friends who decamp for the country to escape Covid. They quarantine at a bungalow colony owned by their friend Sasha Senderovsky, an insecure middle-aged novelist whose career has stalled. Like the aristocrats in Boccaccio’s “Decameron,” who head to the Italian countryside to escape the Black Death, Sasha and his friends hope to ride out the pandemic in the Hudson Valley, where they bicker, fall in love, nurse old grudges and try and fail to keep the virus from infiltrating their bubble.

“Our Country Friends,” which Random House will release next week, is being lauded as “the great American pandemic novel” and has drawn comparisons to Chekhov, who hovers over the novel like a patron saint. At turns bitingly funny and unbearably sad, it’s among the first major works of literary fiction to wrestle with the psychological, sociological and cultural impact of the pandemic, and marks a new, more reflective register for Shteyngart.

“This is the darkest of his books,” said the writer Suketu Mehta, a friend of Shteyngart’s who read an early draft of the novel and acts as his “official Indian fact checker.” “It’s the first piece of fiction that I’ve read that got at what the entire planet went through last year.”

For Shteyngart, the pandemic was not so much a shock as a culmination of his lifelong belief that we’re living on the edge of disaster. “The constant state where terrible things are happening to every single member of society, where you can’t escape, that’s going to be the new normal, so we have to change the way we write,” he said.

“It’s a moment where we don’t have the political, social, societal will to avert catastrophe,” he added. “How do you not write about that if you’re a writer?”