When Amazon Prime finally starts delivering to heaven, Evelyn Waugh should order a copy of Antonia Fraser’s new book, “The King and the Catholics: England, Ireland, and the Fight for Religious Freedom, 1780-1829.” Fraser’s latest considers a topic close to Waugh’s tart heart: bleak Roman Catholic prospects in aggressively Anglican England. The reference to religious freedom in the book’s subtitle suggests why more earthly readers would find the book of interest, but, refreshingly, Fraser makes no effort to convince us that a centuries-old story of religious and political conflicts and competing minority rights remains relevant. Such confidence is rare today, given the easy temptation to gravely invoke Brexit and ISIS and Donald Trump and the Vatican. Instead, Fraser trusts that we can make the germane connections — or not. As far as she’s concerned, the story matters anyway. 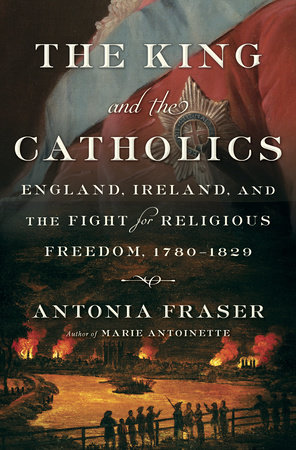 “The King and the Catholics” isn’t as magisterial as “Mary Queen of Scots” or as flat-out exciting as “Faith and Treason: The Story of the Gunpowder Plot.” Instead, it’s a convincing and worthy addition to the already impressive Fraser corpus. It opens boldly. “The story begins with violence: In the summer of 1780 London was the scene of the worst riots the city had ever experienced.” About 1,000 people died, and “the physical damage to the structure of the city would not be surpassed until the Blitz in the Second World War.” The riots were a reaction to the Catholic Relief Act, passed two years before under George III, which proposed to repeal measures that had been in place since the Jesuit martyr Edmund Campion’s day, including the arrest and imprisonment of Catholic priests and teachers, and the prohibition against Catholics purchasing land. A new Oath of Allegiance, featuring a repudiation of the pope’s temporal authority and prayers for the king, was also included, but this didn’t mollify the act’s opponents, elite Protestants who stirred up popular resistance that was in turn fed by “Game of Thrones”–worthy rumors, including one declaring the presence of “20,000 Jesuit priests lurking in the tunnels beneath the Thames, only waiting for orders from Rome to blow up the banks and bed of the river in order to flood the whole of London.” There were no more than 80,000 Catholics in England at the time, in a population of seven million.

Fraser takes us from this absurd and awful situation across five decades of British history, which were marked by near-constant parliamentary and public debate and agitation about the rights of Catholics. In 1829, a Catholic emancipation bill finally received royal assent, if nearly against George IV’s royal will; its passage involved shrewd and violence-free campaigning by Irish and English Catholics alike, who were supported by Irish Catholic immigrants in America and by some, but certainly not all, of the leading members of British Protestantism. The success of the 1829 bill depended, decisively, on the prodigious pro-emancipation efforts of Daniel O’Connell, a Bolívar-quoting Irish Catholic lawyer, occasional duelist and eventual Member of Parliament for Dublin and other Irish ridings, and equally on the striking about-face of Robert Peel, champion English Protestant, throne-defending home secretary and future prime minister. After years of leading the anti-Catholic opposition, Peel calculated with a statesman’s prudence that it was time to end the debilitating effects of centuries of Catholic debates on the British body politic.

Fraser’s presentation of this story is free of both footnote skirmishes and extravagant claims, but she devotes too much attention to the many minor players’ biographical minutiae at the expense of commentary and analysis of the complex, even self-contradictory situations that emerge in the course of her narrative. Liberal intellectuals like Lord Byron both supported the rights of individual Catholics and assailed the absolutist dimensions of Catholicism itself; George IV’s initial refusal to grant assent to the 1829 bill raised the question of the ultimate source of power in a parliamentary democracy; English Catholics desired increased freedoms and standing but didn’t like being associated with Irish Catholics seeking the same, a divisive dynamic that also played out along class and lay-clerical lines; Protestant opponents wondered what it meant for Catholics to serve in a Parliament that had decision-making responsibilities for the Church of England. Also, what did Rome think of all of this?

Fraser raises these matters, but far too briefly when compared with her detailed historical reportage. There’s readerly consolation, however, in the book’s many small and wonderful discoveries, whether choice parliamentary put-downs or descriptions of the lanterns that adorned the English seminary in Rome and spelled out a call for the emancipation of Catholics. “Some Italian passers-by,” Fraser tells us with her understated panache, “believing that a new saint had been canonized, struck their breasts with the invocation Santa Emancipatione, ora pro nobis.”

Randy Boyagoda is a professor of English at the University of Toronto, where he is also principal of St. Michael’s College. His new novel, “Original Prin,” will be published in May.