The devastated dad who doodled his grief away: Animator Gary Andrews illustrates the reality of riding the rollercoaster of bereavement while trapped in the hamster wheel of childcare

‘Grief,’ wrote C. S. Lewis, ‘is like a long valley, a winding valley where any bend may reveal a totally new landscape.’

After his wife — poet Joy Davidman — died aged just 45 in 1960, the Chronicles Of Narnia author was compelled to document his fear, sorrow, loneliness and anger in the heartbreakingly frank book A Grief Observed, which is still recommended to the bereaved by Macmillan nurses today.

Sixty years later, animator Gary Andrews has been similarly compelled to document the loss of his own wife, also called Joy, using simple ‘doodles’ to express the emotional landscape of his bereavement. 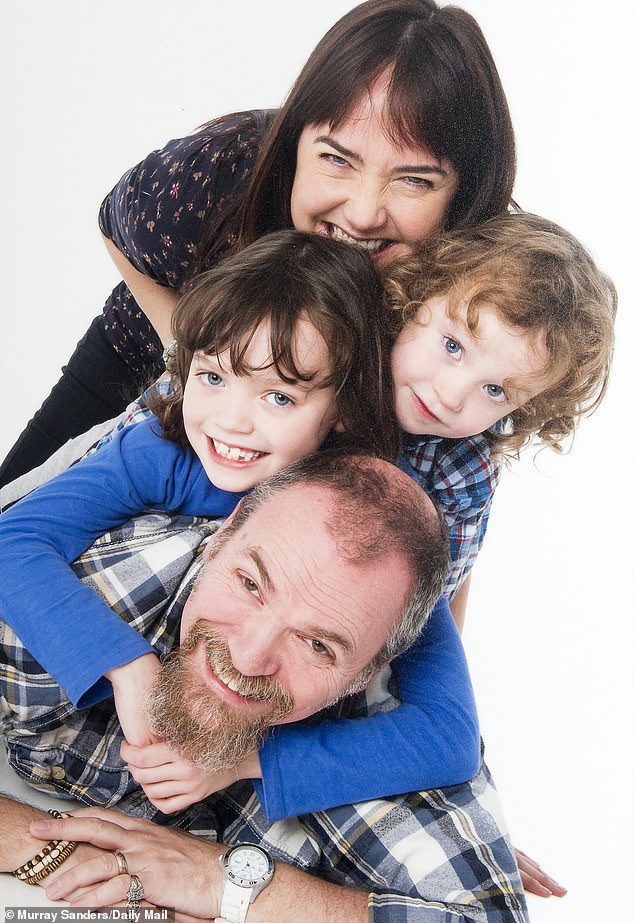 Gary Andrews pictured with his wife Joy and their children Lily, ten, and Ben, seven, in 2014

Gary and Joy were married for 19 years when she died, very suddenly, from sepsis in October 2017.

He was working in Canada that week and 41-year-old Joy was at home in London with their two children: Lily, ten, and Ben, seven. At first she thought she was just under the weather, but her condition deteriorated rapidly. Joy’s sister called Gary and told him to fly home. But her family met him at the airport with the news that she had already died.

He collected his children and recalls that ‘what followed was the hardest thing I ever had to do, as I held them close and told them that Mummy had died. As long as I live, I will never forget the animal howls of pain as the news sank in.’

Gary, who has worked for Disney, had sketched a scene from family life every day for years. But as the weeks passed, he realised the sketches were becoming ‘a form of self-counselling — a moment of meditation at the end of each day as I tried to make sense of my grief, navigating life’s twists and turns as a solo parent’. 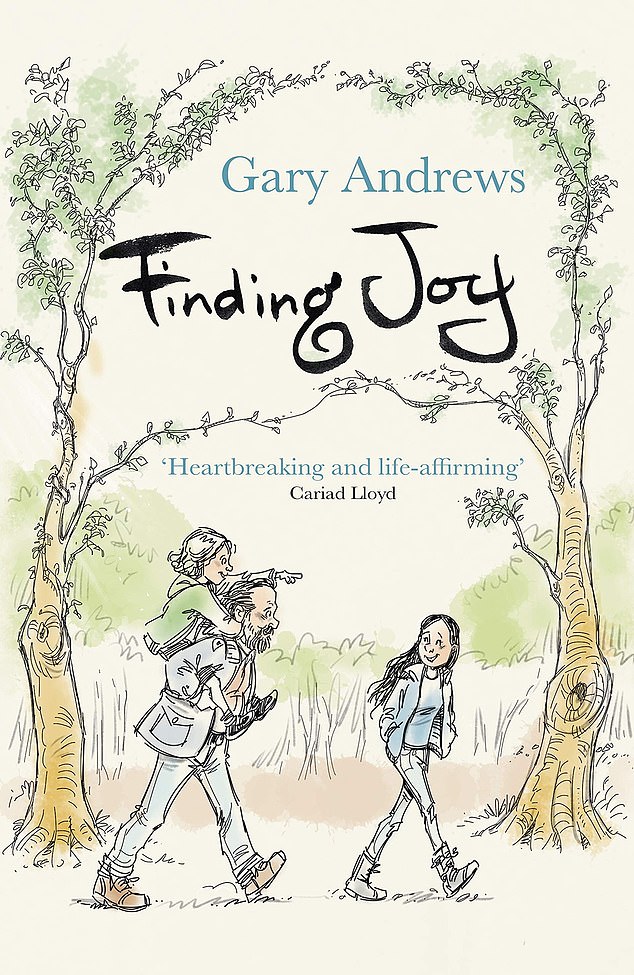 There’s a cuddly candour to his self-portraits. He draws himself hairy and paunchy, with bags under his eyes. Early sketches depict him slumped on the sofa with a glass of wine.

Joy is often shown — highlighted with luminous white pencil — above and behind the family. Several inches taller and 15 years younger than her teddy bear of a husband, she floats through the pages like a fairy queen.

Looking at the sketch of her stretching protective arms above her children I was reminded of C. S. Lewis’s line: ‘Her absence is like the sky, spread over everything.’

Gary records his darkest, emptiest moments: his fear of the empty double bed, his excessive comfort eating and the times he sat in the car, unable to move after the school run. 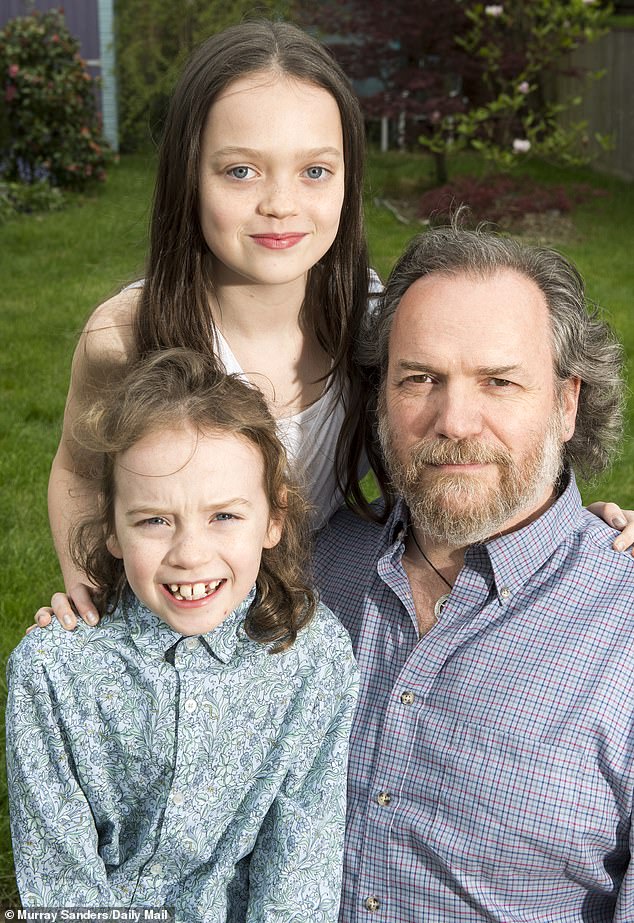 Gary Andrews, who lost his wife joy to sepsis with his children Lily and Ben at home in Horley, Surrey

He draws his ‘Grief Demon’ as a gnarly old scribble that clings to him like a gargoyle. But as a single parent, Gary doesn’t have time to wallow.

We see him riding the rollercoaster of bereavement and trapped in the hamster wheel of childcare.

‘If anyone tells me that stay-at-home mums have it easy, I will punch them in the face,’ he writes.

The children ensure humour elbows its way into the atmosphere. While Lily asks her dad if he will remarry or worries that she can’t cry, he punctures the solemnity with fart jokes and facts about poo. 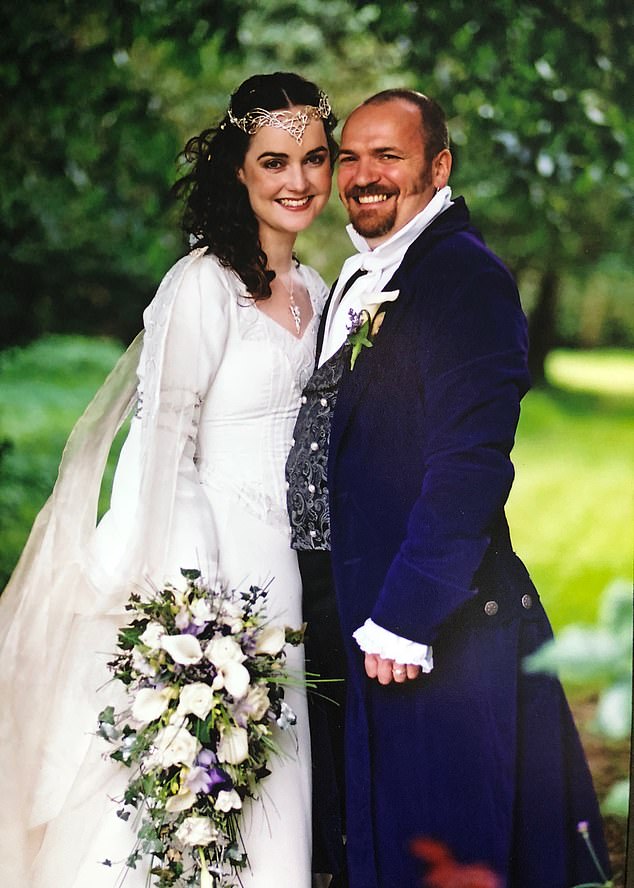 Gary and Joy’s wedding. The couple were married for 19 years before Joy’s death 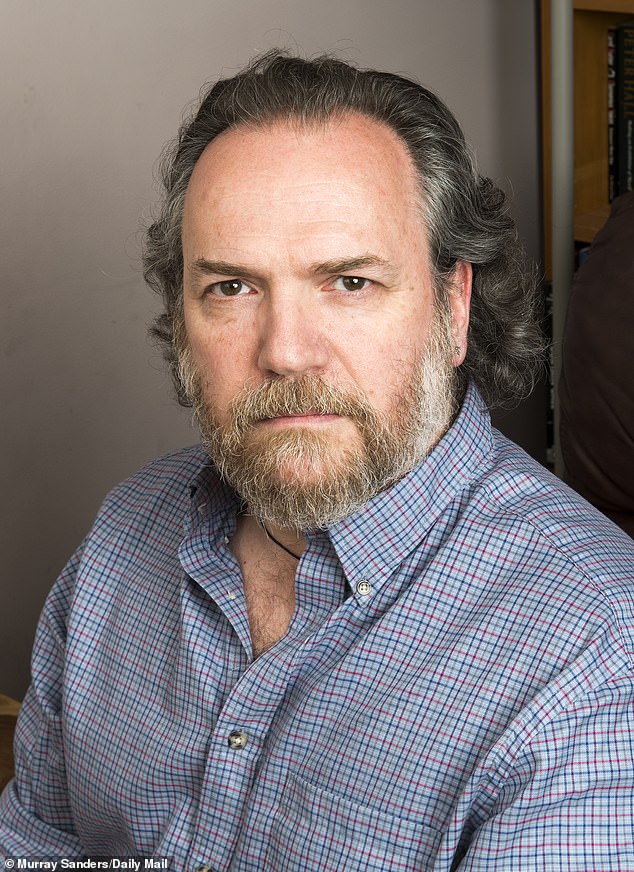 ‘The kids taught me so much,’ writes Gary, paying tribute to their ability to live in the present, their ‘brutal honesty’ and their simple world view.

He honours their truth with his own. So when Lily asks: ‘Why us?’, her dad tells her: ‘It’s just the randomness of the universe, darling.’

It’s touching to see them find their way to a new normal. And it’s genuinely uplifting to see Gary learn to smile at his memories of Joy and look to the future with hope.

Although some books on grief can be prescriptive and preachy, this one is neither. Gary is simply a middle-aged bloke who wishes his wife hadn’t died. But he does end with a few words of advice. 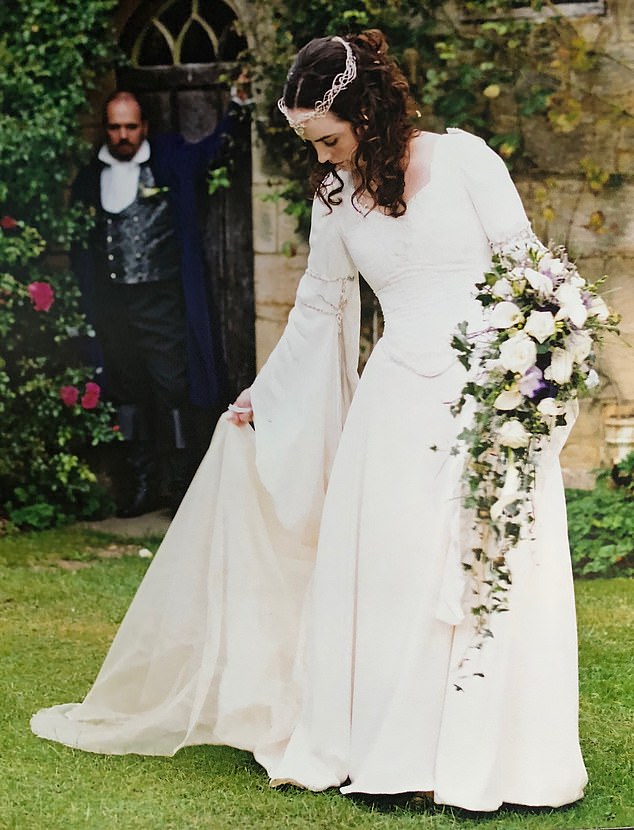 He recommends taking up kind offers of support and makes a strong case for social media as a ‘comforting place’.

‘Sometimes late at night if I was feeling sad I would go live — there was always someone there who would comment and let you know you were not alone,’ he writes.

‘To love at all is to be vulnerable,’ wrote C. S. Lewis. ‘Love anything and your heart will be wrung and possibly broken.’

He was right. But it’s a privilege to witness Gary’s love survive his loss.