Andrew Clements, who mined a brief career as a teacher in Illinois in writing two dozen books for young readers, most notably “Frindle,” which sold more than eight million copies, died on Nov. 28 at his home in West Baldwin, Maine. He was 70.

His wife, Rebecca (Pierpont) Clements, said the cause had not been determined.

“Frindle” came about almost haphazardly when Mr. Clements, already established as a writer of texts for children’s picture books, was talking to a group of first and second graders in Rhode Island in 1990 about where words come from.

“People made up all these words,” he said. But when the children did not believe him, he pulled a pen from his pocket and said that if they started calling it a “frindle,” and persuaded others to use the word, it might take hold.

When one boy said it was impossible to make up a new word, Mr. Clements suggested going to a nearby convenience store and asking for a frindle.

“Let’s say it’s a lady working there,” he told the students. “Well, she’s going to look at you like you’re crazy, but say the word again — ‘I need a frindle, you know, a frindle.’ Say it two or three more times, and then help her out. Point at the plastic container of pens and say, ‘There they are!’”

If kids asked for a frindle day after day, he asked, “What’s the lady behind the counter going to do?” 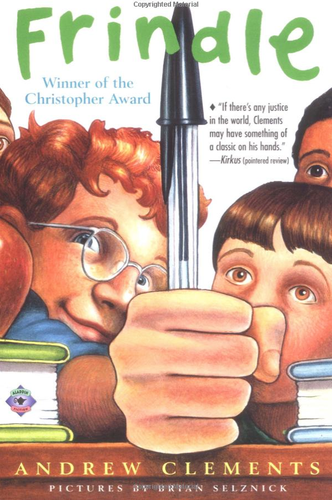 The moment stayed with him. At first he tried to write a picture book, but after publishers rejected it, he turned it into “Frindle” (1996), his debut novel for 8- to 12-year-olds.

“Frindle” tells the story of Nicholas, a mischievous boy who bedevils his fifth-grade teacher by persuading all his classmates to refer to a pen as a frindle.

“By turns amusing and adroit, this first novel is utterly satisfying,” Kirkus Reviews wrote. “The chess-like sparring between the gifted Nicholas and his crafty teacher is enthralling.”

“Frindle” was followed by many more books for middle-grade students, including “The Landry News” (1998), about a fifth grader who publishes her own newspaper, in which she writes a searing editorial about her teacher, and “The Losers Club” (2017), about a boy who reads so obsessively (to the exclusion of paying attention in class) that he starts an after-school book club to preserve his quiet reading time and calls it the Losers Club to minimize participation.

Mr. Clements’s books have been praised for their portrayal of the dynamics between students and teachers, the intricacies of classroom and schoolyard culture and the breadth of adult’s as well as children’s emotions.

Before his death, Mr. Clements had written a first draft of “The Frindle Files,” a sequel to “Frindle,” in which Nicholas becomes a teacher. Mr. Clements’s agent, Amy Berkower, said by phone that it might be completed by a collaborator.

Andrew Elborn Clements was born on May 29, 1949, in Camden, N.J. and grew up in nearby Oaklyn and Cherry Hill before moving with his family to Springfield, Ill., when he was in the sixth grade. His father, William, sold insurance; his mother, Doris (Kruse) Clements, was a homemaker.

An avid reader from a young age, Mr. Clements earned praise for his writing while attending Northwestern University, where one of his professors asked him to teach creative writing at summer high school workshops. After graduating with a bachelor’s degree in literature in 1971, he earned a master’s in teaching at National Louis University, in Chicago.

He taught for seven years at schools in Northfield, Wilmette and Winnetka, Ill., but his job security was uncertain because of declining enrollments. He later remembered those classroom years as essential to a future devoted to writing for young readers.

“As a teacher, it was a thrill to read a book aloud, and see a whole class listen so carefully to every word, dying to know what would happen next,” he said in an interview published in “Something About the Author,” a book that examines the lives of children’s books authors and illustrators. “And I was amazed at the wonderful discussions a good book can spark.”

He and his wife moved to Manhattan in 1979, at first hoping to build a career in music; both sang; he wrote their songs, and they performed and recorded a demo, but decided it wasn’t a career after a year-and-a-half.

Mr. Clements then found work with a publisher of how-to books in the early 1980s, and then with another publisher, Picture Book Studio, soon after. While there, he wrote his first children’s book, “Bird Adalbert” (1985), under the name Andrew Elborn. It was illustrated by Susi Bohdal.

In addition to his wife, Mr. Clements is survived by his sons, John, Nate, Charles and George; his sisters, Martha Wilday and Frances Fawcett; and his brothers, Denney, Jeffrey and Matthew.

Mr. Clements said that he regularly tapped his memories to enliven his books. For “The Jacket” (2002), he used his recollection of an incident when one of his brothers wrongly accused an African-American youngster of stealing a jacket.

In the book, the angry confrontation leads Phil — the character based on his brother — to question his racial attitudes and wonder if he would have reacted the same way if Daniel, the accused black youngster, had been white.

“Phil knew he had never had a black kid for a friend, not really,” Mr. Clements wrote. “The kids on the school basketball team were good guys, but not really friends. Black kids went to his school, but did they live in his neighborhood? Not in his part of the city. That’s just the way things were.”