If Alan Rickman ever met or mingled with ordinary folk, he never recorded this in his diaries, which are an epic of name-dropping. ‘Kiefer Sutherland says hello’; ‘Dan Day-Lewis jogs by, sweating’; ‘Terry Gilliam arrives with Johnny Depp’; ‘the first people I see are Meryl Streep and Tom Cruise’; ‘all of a sudden, there was Julia Roberts’. When Rickman plays charades, Bette Midler keeps score.

I think my favourite moment in this book is when Sarah, Duchess of York, embraces Rickman in a lift. ‘Eric!’ she squeals, having mistaken Rickman for Eric Idle, the camel-faced Python.

If he arrives at Montreal Airport, ‘Charles Dance is there, a genuinely nice man.’ Rickman goes to the Savoy Grill with ‘schoolmarmish’ Emma Thompson (‘a very easy, enjoyable meal’), and as a New Labour supporter he attends Glenys Kinnock’s birthday party and a charity auction, where ‘John Prescott bid £3,500 for some Orwell first editions.’ Who knew? 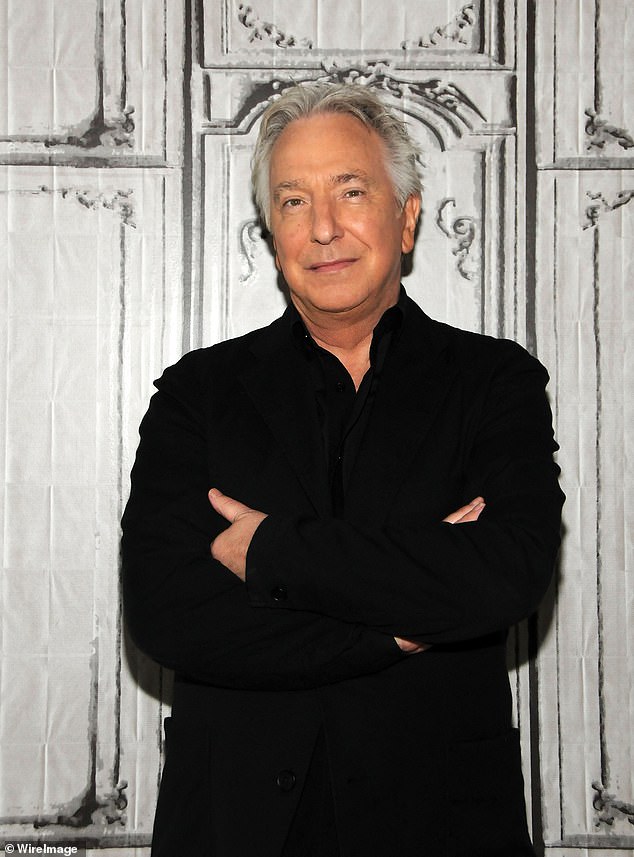 If Alan Rickman (pictured) ever met or mingled with ordinary folk, he never recorded this in his diaries, which are an epic of name-dropping 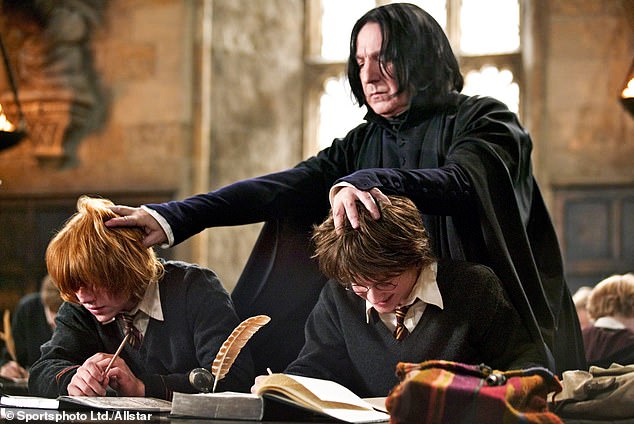 Look closely, however, and Rickman’s (pictured as Snape in Harry Potter) life was rather superficial and hellish, a flurry of pre-dawn calls and taxi rides, endless long-haul flights (27 in 1998 alone)

A copper-bottomed celebrity, Rickman, born into a working-class family in Acton, in 1946, is invited to spend luxurious weekends in Venice with the founders of Microsoft. He is always running the red-carpet gauntlet. ‘I feel like I’m walking around in a magazine,’ he sighs as he catches yet another transatlantic plane to New York or Los Angeles.

Look closely, however, and Rickman’s life was rather superficial and hellish, a flurry of pre-dawn calls and taxi rides, endless long-haul flights (27 in 1998 alone), publicity junkets, launch parties and official receptions. He has appointments with accountants, lawyers, costume fitters, producers and directors, none of whom he much likes. He often complains about people’s ‘fatal indecisions and non-involvement with others’.

And the reader thinks, pot, kettle. Yet Rickman is genuinely stunned when Sean Mathias, trying to direct him in Shakespeare, finally demands, ‘Would it hurt you to show some f***ing charm?’

In her Foreword, Dame Thompson says Rickman was ‘profoundly nurturing and imperturbably distant,’ ‘temperamental and languid’. We don’t see much evidence of warmth or compassion.

Indeed, Rickman says he finds the obligations of friendship a ‘chore’ and is ‘exhausted’ by listening to people’s problems. Worrying about others is to become ‘a personal launderette service’. As his main pal is over-voluble Ruby Wax, you can see he has a point.

Temper and coldness, on the other hand, Rickman does sense in himself — he agrees how on film sets he can be ‘difficult, temperamental, uncommunicative,’ sullen, sulky, ‘brooding and prevaricating’.

I sensed the surliness from his performances, and Rickman was best known for his villain in Die Hard, opposite Bruce Willis, and for playing Severus Snape in eight Harry Potter movies. I always cherish the panto Sheriff of Nottingham, in the Kevin Costner Robin Hood: ‘Cancel the kitchen scraps for lepers and orphans, no more merciful beheadings, and call off Christmas,’ in his affected drawling goose honk of a voice.

He also created the role of Valmont on stage, in Les Liaisons Dangereuses. Juliet Stevenson told me it was like acting opposite a sponge, as Rickman sucked up every available drop of energy in a ten-mile radius.

He made films about Mesmer and Rasputin, and there were lots of things I’d never heard of — Bottle Shock, Nobel Son, Snow Cake — but evidently enough wealth was coming Rickman’s way to fund a flat in New York, a big Victorian place in Holland Park, a villa in Tuscany, and regular Caribbean and South African holidays. He was seated in a posh restaurant most nights.

But nothing was settled, peaceful. All was panic-stricken. Rickman is perpetually living in a building site, with workmen ‘plastering, repairing cracks, dust everywhere’.

He never stops wanting to move somewhere else, somewhere better. Whenever he takes possession of another home, fire alarms go off, pipes burst under the utility-room floor, and the electricity is shut off.

Work isn’t calm or calming, either. Rickman fumes he’s on call all day, and not needed. Or if he is pleased with how a scene went, it’ll be deleted in the editing. He is furious at the waste of his time and talent. The ‘stealthy hand of the money men’ is in charge, not creativity. Most of the time, Rickman feels ‘demeaned and soiled,’ is ‘completely knackered’ by Hollywood’s demands, the ‘cold-shouldering mixed up with the kiss on the cheek’.

Alcohol didn’t relax him. The more that is consumed, ‘the more the tensions appear’ — and what we have in these diaries is a man unwittingly destroying himself. 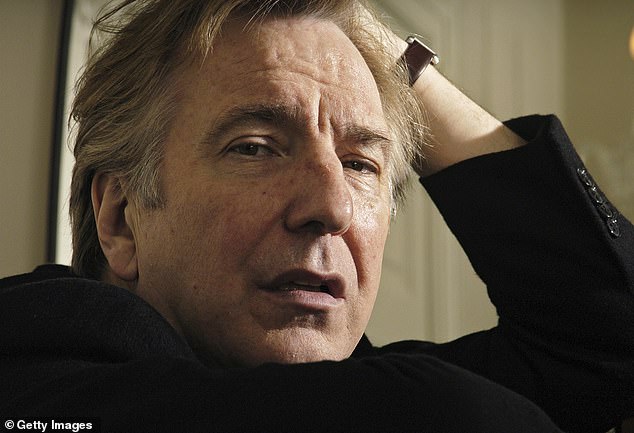 Rickman finds it impossible, or impossible for long, to ‘change, discard, shed, rearrange, dilute, simplify’ his existence, as there’s Kate Winslet (‘sweetness and steel’) to see, Daniel Radcliffe to act opposite (‘I still don’t think he’s really an actor’) 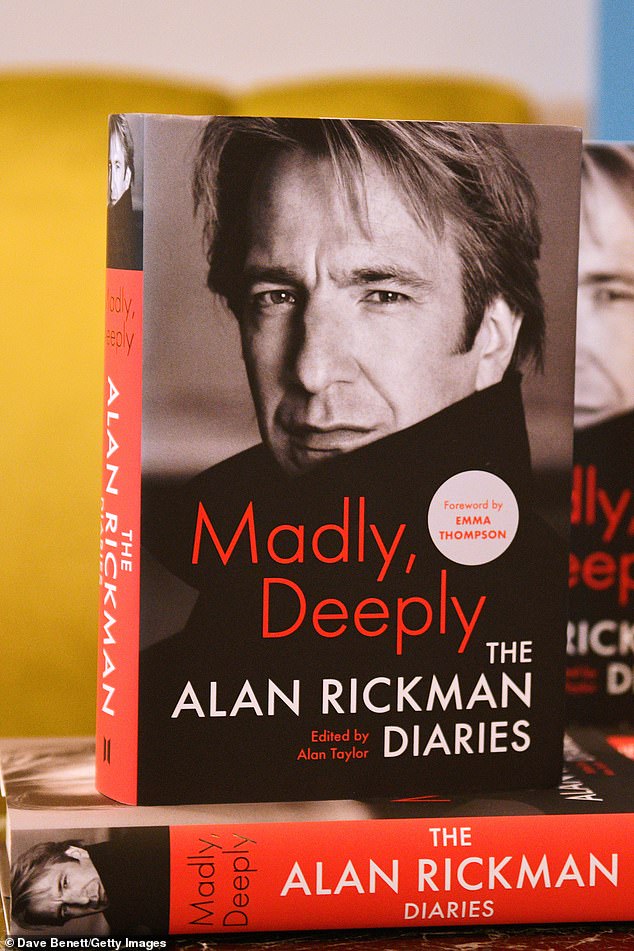 I think my favourite moment in this book is when Sarah, Duchess of York, embraces Rickman in a lift. ‘Eric!’ she squeals, having mistaken Rickman for Eric Idle, the camel-faced Python

The late nights, bad meals at odd hours, room-service snacks, hang-overs and streaming colds; the jet lag, mounds of unopened mail, phones ringing incessantly; the ailing back and neck, stomach upsets, sweating, swellings, skin problems, vision and hearing issues: when cancer comes it is no surprise. Rickman, for some years, complains about being ‘too rushed’ and says he’s ‘tired through to the bones’. On and off planes continually, ‘the body clock is whizzing, rewinding and whirring’. He talks about ‘this weird displacement of mind and body,’ and it is tragic to read of the way he kept promising himself tranquillity, solitude, ‘time and space to be creative,’ clearing out the cupboards, literally and metaphorically.

But he finds it impossible, or impossible for long, to ‘change, discard, shed, rearrange, dilute, simplify’ his existence, as there’s Kate Winslet (‘sweetness and steel’) to see, Daniel Radcliffe to act opposite (‘I still don’t think he’s really an actor’) and Ewan McGregor to be put in his place (‘self-involved to a jaw-dropping degree’).

Finally, it is Rickman who is operated on for prostate cancer and who then finds out he has inoperable pancreatic cancer. ‘A different kind of diary now,’ he jots on July 14, 2015 — blood tests, hospital appointments, chemotherapy sessions. He died on January 14, 2016.

This volume is a ‘distillation of more than a million words’, so what were the principles of selection? It is atrociously edited. We never quite know where we are or why, and not everyone is identified.

‘Join R & E & B at local Indian restaurant’ — there’s much like that, utterly meaningless. Little, actually, is divulged or explained about the private side of things, either, e.g., Rickman’s relationship with his partner, Rima Horton, whom he met as a teenager and didn’t marry until 2012. There were no children.

What was he doing, going regularly to a New York sex club called The Box? I also hated the way, in footnotes, actresses are called ‘actors’. Princesses and heroines will be going next. I won’t have it.