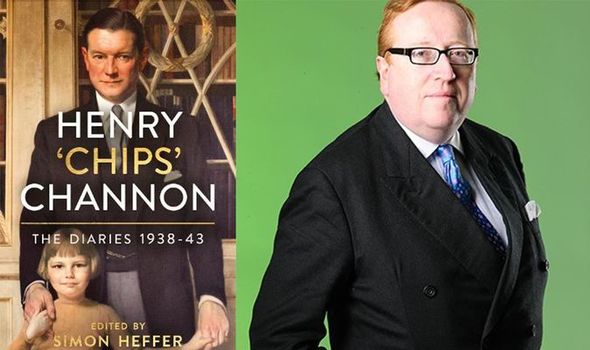 This volume opens on October 1, 1938, the day after the Prime Minister and Channon’s hero Neville Chamberlain returned from seeing Hitler and landed at London airport declaring “peace in our time”.

“I felt sick with enthusiasm. I wanted to clutch him,” wrote Channon, giddy with admiration.

Channon was no fan of Churchill and was an important witness to the fall of Chamberlain and the ascent of Winston.

Indeed when Chamberlain stepped down, he noted: “England in her darkest hour had surrendered her destiny to the greatest opportunist and political adventurer alive!!!”

Channon continued his hero-worship of high-ranking Nazis until the outbreak of war. Sadly, he was not alone in this view and anti-semitism as rife in the circles in which he moved.

Indeed, Channon’s judgement was so often wrong it is just as well he never held a senior government post after being sacked as Rab Butler’s bag carrier.

As with the first volume, Channon leads a hectic social life as the bombs are falling.

Among others, he meets Lord Alfred Douglas, Oscar Wilde’s boyfriend. Channon sees a photograph in Lord Alfred’s flat and is amazed by how good looking he was in his youth. He says the

Despite the German bombardment he finds little to praise in Churchill. He is “a bully, an irritating tyrant, unfair, unkind, wrong”.

In June 1942, he note: “Winston is losing the war if he has not lost it. He is the most dangerous man in England.”

The diary ends on July 25, 1943 with Channon missing his boyfriend and thinking the war was almost half over – at last he got something right.