A history of Earth suggests humanity will eventually die out

Extinction is coming!… but it won’t be the end of the world. A history of Earth suggests humanity will eventually die out — but new life forms will evolve to take our place

Dig deep below contemporary London gravel to the clay, and you will find astonishing fossilised remains of crocodiles, sea turtles and early relatives of horses.

They lived in an epoch when London was ‘forests of mangrove palm and pawpaw, and waters rich in seagrass and giant lily pads, a warm, tropical paradise’.

More recently there was a time when, instead of Landseer’s stone lions, real lions lived in what is now Trafalgar Square, gazing down on herds of elephants and hippos grazing beside a wide, meandering river.

This mind-boggling scene introduces us to the concept of ‘deep time’, explains Thomas Halliday, as he leads us on a mesmerising journey into those vast stretches of Earth’s pre-history that lie behind us, on such a scale that you experience a kind of temporal vertigo just thinking about it. 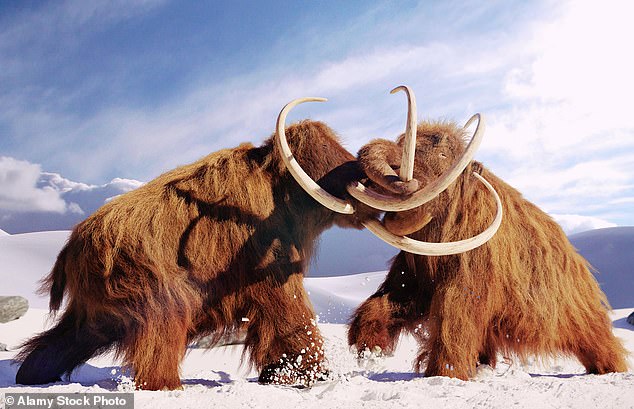 Thomas Halliday delves into the vast stretches of Earth’s pre-history that lie behind us in a fascinating new book. Pictured: Mammoths roamed the ancient tundra

Halliday is a Fellow in Earth Sciences at Birmingham University, but he is also a brilliant writer, his lyrical style vividly conjuring myriad lost worlds from the patchy but sometimes startling fossil records. Each chapter here takes us further back in time, to an older and more alien earth with every passing epoch.

We begin a mere 20,000 years ago, in the heart of the last Ice Age, and on the dry plains of Alaska: the eastern end of the awesome Mammoth Steppe, an unbroken grassland that stretched (sea levels being much lower then) all the way from the Americas across Russia to Ireland.

Over these plains roamed immense herds of herbivores: camels, (yes, camels are originally American, later migrating to the Old World over the Bering Strait), bison, horses and mammoths.

The last mammoths actually survived until just 4,500 years ago, contemporaries of the Pyramids and Stonehenge, a small and increasingly inbred group on Wrangel Island near Russia.

Top predator of the Steppe was unquestionably the short-faced bear, which on its hind legs towered a metre above the three-metre-high shoulder of a mammoth.

But there were also humans around. We know this from ‘the footprints of a gleeful group of children, running through the ditchgrass into the mud of a chalky lakeshore, 22,500 years before the present,’ and still visible ‘in the white sands of New Mexico’. 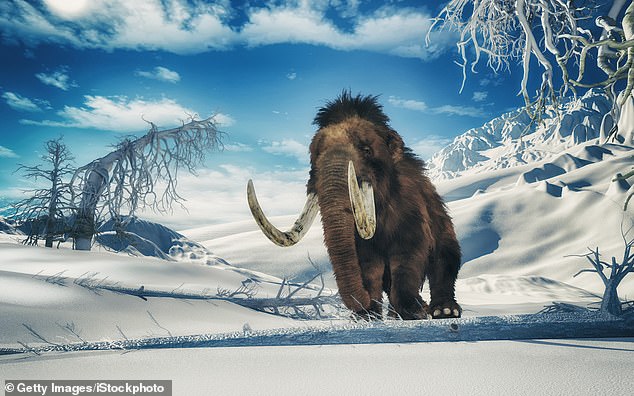 Thomas begins the book in the heart of the last Ice Age,  revealing the last mammoths actually survived until just 4,500 years ago (file image)

Imagine what stories they must have told each other by the evening fire, sharing their landscape with creatures including mammoths and short-faced bears . . .

By chapter three we have dived back 5.33 million years to a truly apocalyptic moment. The Mediterranean then was sealed off from the Atlantic by a land bridge at Gibraltar, joining Africa to Europe.

The inland sea had evaporated, so where the Med now sparkles there was only a huge dried-out salt lake, in some places 4 kilometres below sea level, with temperatures down there reaching 80c — some 25c hotter than anything ever recorded in Death Valley, California.

This burning saline desert was dotted with cooler volcanic island plateaus covered in cedar trees, and ‘a shrubland of pistachio, box, stooping carobs and gnarled olives’.

One day, a trickle of Atlantic sea-water began to seep over the top of the Gibraltar land-bridge, eroding the dry earth as it went, until the trickle became a stream, then a river — then an unstoppable cascade.

A mile high and several miles wide, the torrent roared over and dropped at 100 miles per hour, throwing up a ‘tumultuous cloud mist’, with the eastern Mediterranean becoming a sea once more in just one astonishing year.

Sicily and Malta became islands in that sea, populated by hippos, dwarf elephants and the Terrible Moon-Rat (yes, that was actually A Thing). 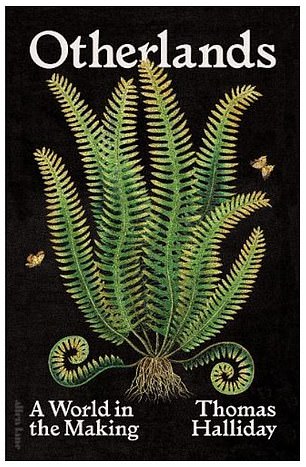 There are so many wonders here: a rock wall in modern Bolivia where dinosaur footprints climb gecko-like up a sheer vertical cliff, because the surface of the earth has tilted 90 degrees over 32 million years; beavers and hedgehogs, Asian arrivals, wiping out native European primates; the incredible fact that it was on huge rafts of vegetation riding the ocean currents that many animals, including monkeys and guinea pigs, travelled accidentally from Africa to South America, surviving an ocean voyage of at least six weeks on their uncertain craft.

Going back to 550 million years ago, our world seems like another planet altogether.

Then there were animals so strange that scientists have named them Hallucigenia, and there was no North Star in the sky, nor a single star of the seven in Orion, nor brilliant Sirius. None of these familiar stars had even been born yet.

Journeying into the abysses of deep time in Otherlands certainly makes the reader feel very small and transient — a feeling both humbling and comforting — and surely reminds us that we pay our minor daily troubles too much attention.

Barring some unprecedented effort of global cooperation, which seems a little unlikely at present, the world will rapidly head back soon to something like the steamy, swampy Eocene epoch of 50 million years ago, bringing a mass extinction of today’s flora and fauna (including us, unfortunately), and then, after a few million more years, a huge explosion of unimaginable new species better suited to this hothouse earth.

This planet is still, as the book’s subtitle reminds us, ‘a world in the making’.

It’s obviously a bit of a gamble choosing one’s Book of the Year in March — but there’s a very good chance already that mine will be Otherlands. Stunning.