A gift not quite fit for a prince: Book reveals the politics of diplomatic gifts, including the King of Denmark and Norway who was gifted SEVEN beavers by Tallinn in Estonia in 1489

After French troops helped to liberate the city of Timbuktu in 2013, President Francois Hollande visited Mali to receive the thanks of a grateful nation. One way in which that gratitude was expressed was the gift of a camel.

Unsurprisingly, the French presidential plane wasn’t able to accommodate such a large animal, so while alternative arrangements were made, the camel was given to a local family for safekeeping.

Two months later, French officials contacted the family — only to find there had been a misunderstanding. The camel, the officials were told, had tasted delicious.

Diplomatic life is rarely simple, certainly if we’re to believe Paul Brummell’s book about the gifts that form a crucial part of it.

But the best animal story comes from 1489, when the town council of Reval (modern-day Tallinn in Estonia) sent Hans, King of Denmark and Norway, no fewer than seven beavers.

Each cost the same as a good horse, because of the valuable castoreum they produced. This oily secretion (obtained from a sac between the genitals and anus) has a vanilla-like aroma, and is used even today in the perfume and food industries. It’s also present in a Swedish schnapps called BVR HJT, pronounced Bäverhojt or Beaver Shout.

Diplomatic gifts don’t always produce the intended result. In an attempt to woo the Maharaja of Patiala, and so increase the chances of India remaining neutral in the run-up to World War II, Adolf Hitler sent the ruler a Maybach DS8 Zeppelin car.

It had two big lights at the front, to indicate whether the maharaja or his wife the maharani was on board (if both were lit then both were travelling). The maharaja gladly accepted the car — then supported the British anyway.

Sadly, history doesn’t record what happened to the straw penis sheath given by the people of the Pacific island of Tanna to Prince Philip (pictured). 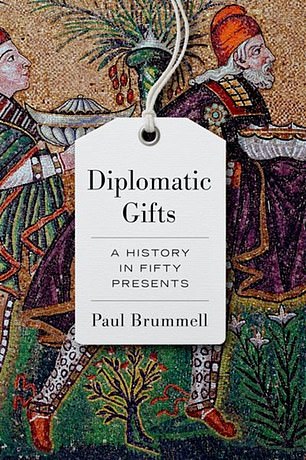 As you might expect from a career diplomat (Brummell is now Our Man in Latvia), the book contains a lot of serious history. But it isn’t all names and dates, or at least when there are, they aren’t all conventional.

Even modern events have their pitfalls. In 2007, the Caribbean island of Grenada accepted a new sports stadium from China, in return for agreeing not to recognise Taiwan as a separate state. The inauguration ceremony went swimmingly — until the Royal Grenada Police Band got to the Chinese national anthem and accidentally played the Taiwanese one instead.

Finally, there’s the tale of Sir Oliver Franks, British Ambassador to the U.S., who in 1948 was told a local radio station had asked what he would like for Christmas. He gave his answer.

A few days later, the station announced the requests made by different countries. The French ambassador longed for world peace. The Soviet ambassador desired freedom for all people enslaved by imperialism. The British ambassador said he’d quite like a small box of crystallised fruit.