The archbishop who began every morning by declaring: ‘I hate the church’

A FIELD GUIDE TO THE ENGLISH CLERGY

The Reverend Robert Hawker (1803-75) was the archetypal eccentric Anglican vicar. As curate of Bude, he liked to dress up as a mermaid.

He fashioned a wig out of seaweed and rowed out to a rock in Bude harbour to sing, naked save for an oilskin wrapped around his legs.

The poet parson also founded the harvest festival and kept a collection of ten cats, the majority of whom would make up his congregation (he excommunicated one of them for mousing on a Sunday).

Those of us who have fallen out of love with God still retain an abiding affection for the Church of England.

It is anti-establishment, sceptical and embraces every heresy under the sun. (As one bishop famously quipped of an ultra-liberal colleague: ‘He’ll believe anything provided it’s not in the Bible.’) And its clergymen have always been a rum lot, too, as this delightful compendium reminds us, right up until the present day. 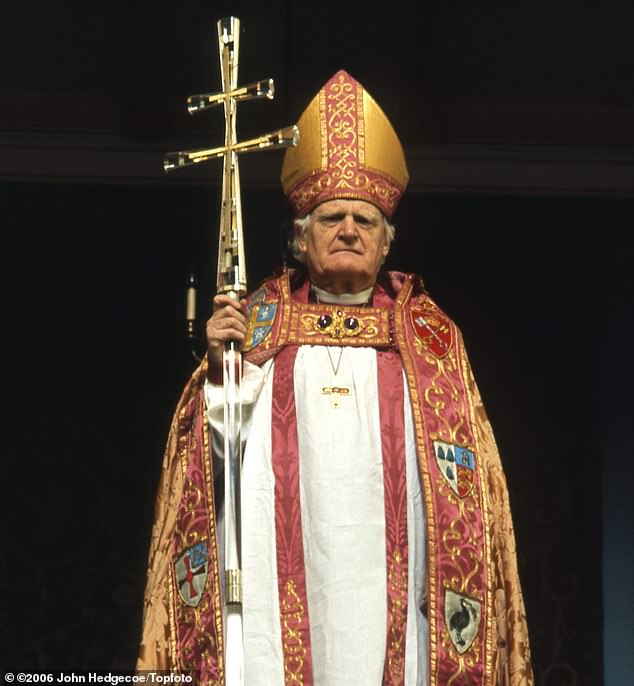 Reverend Fergus Butler-Gallie’s book, A Field Guide to the English Clergy, is a Who’s Who of the Church of England’s most colourful personalities. It features the Archbishop of Canterbury Michael Ramsey (pictured), who started each day banging his head on his desk three times while repeating the mantra, ‘I hate the Church of England’

From the Archbishop of Canterbury Michael Ramsey, who started each day banging his head on his desk three times while repeating the mantra, ‘I hate the Church of England’, to Canon Brian Brindley, who would wear high heels under his cassock while doing his weekly supermarket shop, this is a Who’s Who of the Church of England’s most colourful personalities.

Divided into five sections (eccentrics, nutty professors, bon viveurs, prodigal sons and rogues), the author casts his net far and wide, from the 17th century to the modern era, to offer 48 pen-portraits of larger-than-life clerics who have left an indelible impression on the world.

All are of the male sex, for which the author apologises in his foreword — ‘the Church of England’s regrettable tardiness in ordaining women to the priesthood’ — but it is astonishing that any woman would want to join such an institution, given the eye-popping tales of lunacy, debauchery and depravity on display here.

When it comes to eccentrics, Hawker has stiff competition in a crowded field. Rev George Harvest, dubbed the most forgetful man in 18th-century England, forgot to turn up to his own wedding twice (they were different brides). The author remarks: ‘He remained a bachelor.’

Rev John ‘Mad Jack’ Allington swapped his Victorian surplice for a leopard skin and insisted on being carried around in a coffin, popping his head out to greet horrified parishioners as he went.

Rev Ian Graham-Orlebar, the rector of Barton-le-Clay who died in 2016, called his horse Ministry so that when a senior figure phoned the rectory to check on him, they could be truthfully told he was ‘exercising his Ministry’. A later horse was called Sabbatical.

What is the average salary of an Anglian vicar?

The Church of England excelled itself when it came to harbouring bon viveurs, some of whom took the biblical injunction ‘to eat and drink’ rather too literally.

The Rev William Buckland, the Dean of Westminster, set out to eat one of every animal alive on Earth. He developed a taste for mice on toast but couldn’t stomach bluebottles.

Rev Thomas Patten, vicar of Seasalter, hit on an ingenious way of securing alcohol from his parishioners.

He would preach long and dull sermons that would continue until someone in the congregation held up a lemon — a sign they would buy the vicar drinks for the evening.

One suspects few of the deranged and dissolute clerics were equipped for any other walk of life. That is presumably why so many were kept for 50, 60 or even 70 years in the same parish: better to quarantine them than to let them loose on the world at large. 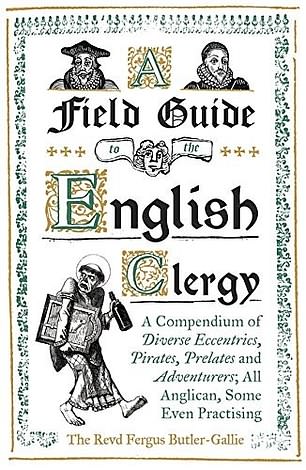 A FIELD GUIDE TO THE ENGLISH CLERGY by the Reverend Fergus Butler-Gallie (Oneworld £12.99, 192 pp)

When it came to going forth and multiplying, none could eclipse Rev Sabine Baring-Gould, the author of the hymn Onward, Christian Soldiers, who sired 15 children.

At one of his vicarage parties, the absent-minded host approached a young child and asked: ‘And whose little girl are you?’

Which elicited the tearful reproach: ‘Why, Daddy, I’m one of yours.’

The author, Fergus Butler-Gallie, knows whereof he writes, being a curate himself, and he has done a splendid job presenting a smorgasbord of most peculiar parsons.

Many of the stories are apocryphal, others are too good to be true, but Butler-Gallie clearly feels it is above (or beneath) him to sort the factual wheat from the fictional chaff. This book, which he modestly describes as a ‘scraped together offering’, is primarily about entertainment.

It could have been even longer and no doubt there is a second volume in the offing.

I long to hear more about the clergyman who fancied himself a surgeon and got an elephant drunk on ale before he tried to dissect it.

Happily, the author makes room for the book-reviewing cleric Sydney Smith, the canon of St Paul’s Cathedral, who famously said: ‘I never read a book before reviewing it. It prejudices a man so.’

Reader, rest assured, I did read this book and thoroughly enjoyed it. All human life is here. You never know, it might even restore a bit of faith in our beleaguered Church of England.