13 New Books We Recommend This Week 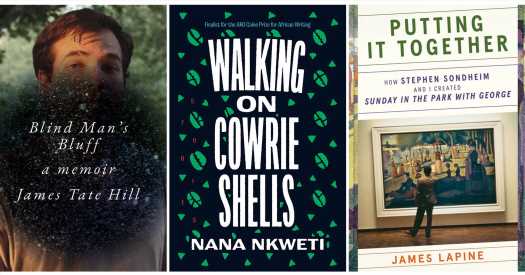 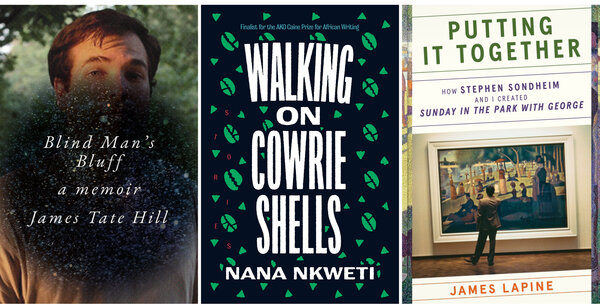 What can we make from pain and suffering? This is a question explicit in several of the books on this week’s robust list, including three new memoirs that address living with physical afflictions. Another nonfiction book tells the story of an American woman who worked in the resistance while living in Germany and was sentenced to death by Hitler. And in fiction, one novel takes place in the aftermath of a family’s experience in a World War II internment camp for Americans of Japanese descent and another is a melancholy story — with room for love and desire — set in a Sri Lanka still reeling from civil war.

Two other works of fiction we suggest: a workplace satire that sends up the well-being industry and a raucous debut collection that ranges across multiple genres.

In a mix of other nonfiction, James Lapine recounts his first collaboration with Stephen Sondheim; Michael Pollan explores how opium, caffeine and mescaline alter our minds; a book inspired by an Oscar-winning short documentary looks at cultural and religious attitudes about menstruation; and a historian investigates the fate of a prominent British family before, during and after the American Revolution.

On this week’s lightest note: Simon Rich has an antic, witty new collection of stories, including one about a toddler detective.

YEAR OF PLAGUES: A Memoir of 2020, by Fred D’Aguiar. (Harper/HarperCollins Publishers, $26.99.) I LIVE A LIFE LIKE YOURS: A Memoir, by Jan Grue. (FSG Originals, $17.) BLIND MAN’S BLUFF: A Memoir, by James Tate Hill. (W. W. Norton & Company, $25.95.) Three new memoirs about affliction have a lot to say, our critic Dwight Garner writes, “about desire and pain and depression and shame and unlikely sources of joy, among other topics.” When D’Aguiar, a poet, novelist and playwright, learned he had prostate cancer, he had no idea what was in store: a year of tests and probes and radiation treatments and surgery that had to take place under fear of Covid, and under strict Covid protocols. His is the “wildest” of these books, Garner says. “His rage to live shivers in every sentence.” Grue, a Norwegian writer and academic, lives with spinal muscular atrophy, diagnosed at age 3. With a shrewd, pared-down and epigrammatic prose style, he has written “a quietly brilliant book that warms slowly in the hands.” Hill’s memoir is about how, while in high school, he learned he had a condition that left him legally blind. Garner writes of this amiable book: “It’s been a long time since I met such a thoroughly normal guy in a memoir.”

ALL THE FREQUENT TROUBLES OF OUR DAYS: The True Story of the American Woman at the Heart of the German Resistance to Hitler, by Rebecca Donner. (Little, Brown and Company, $32.) Donner’s new book is a biography of Mildred Harnack, an American woman sentenced to death by the Nazi regime for her resistance activities while living in Berlin. Donner is Harnack’s great-great-niece, so this is a family history too. It is also a story of code names and dead drops, a real-life thriller with a cruel ending. Our critic Jennifer Szalai calls it an “astonishing” book that uses present-tense narration “as an effective device for conveying what it felt like in real time to experience the tightening vise of the Nazi regime.”

NEW TEETH: Stories, by Simon Rich. (Little, Brown and Company, $27.) The latest collection by Rich, a screenwriter, novelist and former writer for “Saturday Night Live,” includes, among other comic treats, “The Big Nap,” a brilliant parody of hard-boiled noir fiction in which a toddler looks for a lost stuffed unicorn. Rich has “an antic imagination and a delicious wit,” our reviewer Sarah Lyall writes, and his humor is “enhanced by his generous, hopeful heart.”

PUTTING IT TOGETHER: How Stephen Sondheim and I Created “Sunday in the Park With George,” by James Lapine. (Farrar, Straus & Giroux, $40.) A fascinating and rigorous, no-punches-pulled account of Lapine’s first collaboration with Sondheim. Despite the hilarious anecdotes, this is not a collection of gossip. It is actually a story of artistic steadfastness. “Not so much a book at all,” our reviewer Alan Cumming writes, “but a post-mortem, a forensic investigation into what surely must be one of the most unlikely and chaotic journeys to a Pulitzer Prize and a place in the highest echelons of the American musical theater canon.”

CLARK AND DIVISION, by Naomi Hirahara. (Soho, $27.95.) Part crime novel, part generational saga, Hirahara’s gutting new novel explores the aftermath of a family’s imprisonment in Manzanar, the World War II internment camp for Americans of Japanese descent. “This is as much a crime novel as it is a family and societal tragedy, filtering one of the cruelest examples of American prejudice through the prism of one young woman determined to assert her independence, whatever the cost,” our reviewer Sarah Weinman writes.

THIS IS YOUR MIND ON PLANTS, by Michael Pollan. (Penguin Press, $28.) To understand three mind-altering substances — opium, caffeine and mescaline — Pollan turns to his own narratives of gardening and self-experimentation. As he does, he also masterfully elevates a series of big questions about drugs, plants and humans that will leave readers thinking in new ways. The book is “likely to trigger new debates and discussions as well as, no doubt, a fair amount of illicit gardening,” our reviewer Rob Dunn writes.

THE HOWE DYNASTY: The Untold Story of a Military Family and the Women Behind Britain’s Wars for America, by Julie Flavell. (Liveright, $35.) Two Howe brothers led — and lost — Britain’s military campaign to retain its American colonies. Drawing on records left by female Howes of the period, including the eldest sister, Caroline, Flavell has written a detailed history of a family whose reputation has languished in opaque ignominy. It’s a “vibrant” book, our reviewer Rick Atkinson writes, in which “Flavell’s scholarship and deft storytelling add nuance, sympathy and granularity to the family portrait.”

PERIOD. END OF SENTENCE: A New Chapter in the Fight for Menstrual Justice, by Anita Diamant. (Scribner, $26.) Inspired by the Oscar-winning short documentary of the same title, this book takes a historical approach to cultural and religious attitudes about menstruation, and humanitarian efforts to make menstrual products accessible to anyone who needs them. “This hopeful celebration of menstruation will be a useful tool for raising awareness,” Ayobami Adebayo writes in her review.

WALKING ON COWRIE SHELLS: Stories, by Nana Nkweti. (Graywolf, paper, $16.) In her raucous and impressive debut, Nkweti writes across multiple genres including science fiction, Y.A., literary fiction and suspense, showcasing a host of voices from the United States and Africa. These “utterly original stories range from laugh-out-loud funny to heartbreaking, and are often both,” Deesha Philyaw writes in her review. “Sensitivity, nuance and keen attention to history shine through on every page of the collection.”

THE VERY NICE BOX, by Laura Blackett and Eve Gleichman. (Houghton Mifflin Harcourt, $25.) This sparkling debut novel, about the recently orphaned star engineer at an Ikea-like furniture company, manages to expose the hollowness of corporate jargon while exploring how we move on after unspeakable loss. “The authors meld multiple styles and tones — incisive sendup, murky suspense, sexy rom-com — which, in less capable hands, could have yielded a novel with a Frankenstein vibe,” says our reviewer Jillian Medoff. “Instead, they’ve constructed a mirrored fun house, one that leads us down different paths, each masterfully tied up at the end.”

A PASSAGE NORTH, by Anuk Arudpragasam. (Hogarth, $27.) Arudpragasam’s second novel follows a young man on a journey to a region of Sri Lanka still reeling from a decades-long civil war. “Arudpragasam is equally gifted at atmospheric, sensory description that transports the reader to Sri Lanka and India and at examining the emotions — elation, fear, impatience, satisfaction, shame — that simmer below the surface of our everyday lives,” Tara K. Menon writes in her review. The novel is “full of melancholy, but because it takes love and desire as seriously as it does grief and loss, it avoids despair.”